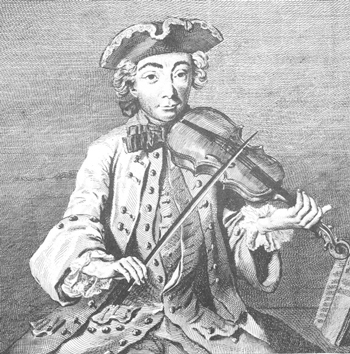 Finding ways to circumvent rules has always been a popular pastime. It has also often inspired creative genius. When Louis XIV put a stranglehold on entertainments such as opera and theater by enforcing rules designed to secure official monopolies, non-court composers and playwrights countered with Fair Theaters (Théâtre de la Foire), low-cost performances on the outskirts of Paris. The satirical plots regularly mocked the pretentiousness of the bourgeois by featuring servants who were far more intelligent than their bosses, or by poking fun at old men who chased after young girls.

On Saturday, May 7 at 8:00 pm at the Bop Stop and Sunday, May 8 at 4:00 pm at Plymouth Church, Les Délices will present Concertos Comiques. The program will include works by Michel Corrette, Francesco Corbetta, Joseph Bodin de Boismortier, and Jean-Joseph Mouret, performed by Debra Nagy (oboe), Julie Andrijeski and Scott Metcalfe (violins), Josh Lee (viola da gamba), and Simon Martyn-Ellis (theorbo and baroque guitar).

“Vaudeville is the name of this repertory, but it’s kind of a refashioning of the voix de villes, or songs or voices of the city,” Debra Nagy said during a recent telephone conversation. “It’s a little different from the way that we know vaudeville today. The word goes way back and even though it has been adapted to something a little different, you can see the trajectory.”

Nagy compared the Théâtre de la Foire to the activities at Huntington Reservation in Bay Village with its vendors, restaurant, theatre, and other forms of entertainment that speak to all types of people. In France it was comedy that reigned supreme, but to circumvent the authorities, actors were required to mime their stories while the audience read cue cards and sang the actors’ lines to well-known tunes.

“If a play was not affiliated with the official court theatre, actors were not permitted to speak their lines,” Nagy pointed out. “These plays were an  audience participation thing. They knew the tunes — for example, Go Tell Aunt Rhodie or Oh! Susanna — and they would sing the text on the cards to those popular tunes. The plots were often very funny with coarse, often satirical humor, poking fun at everything from the opera to scandals in the aristocracy.”

In order to skirt the Court rules that governed the size of an orchestra, the plays needed to be accompanied by an ensemble of no more than six players. “If you had only a few people playing, it couldn’t be seen officially as an orchestra competing with the entertainment that was happening in the city.”

Nagy said that the music featured on this weekend’s Concertos Comiques is virtuosic instrumental music based on the popular tunes that were sung at Fair Theaters. “I wanted to end our season with an instrumental program of light, accessible music, which is why I put it in an informal, fun venue like the Bop Stop. The music is all about transforming simple, ear-catching tunes into something that is virtuosic and showy. That’s not a common thing in French music — the French didn’t believe in virtuosity for its own sake.”

Nagy said that a highlight of the program is Michel Corrette’s Concerto No. 25, “Les Sauvages.” According to Nagy, “‘Les Sauvages’ is a fantastic tune that our audiences have heard several times in a few different forms. It was made famous by Rameau as a harpsichord solo piece. It was tremendously popular and there have been lots of variations written on the tune. The middle movement is also based on a popular tune from a comic opera from the 1750s. The last movement, based on the tune ‘La Furstemberg,’ is a wonderful set of variations. It’s a real highlight of the concert.”

Les Délices will announce their 2016-17 season at these concerts, which Debra Nagy said promises to be the ensemble’s most diverse season ever.

Published on ClevelandClassical.com May 3, 2016.

Music director and conductor Daniel Meyer built his playlist around Cleveland themes and scenes. “Exploration CLE” made use of engaging selections from the classical canon and beyond that celebrated “what makes Cleveland so special.” Happily, he and his musicians avoided constructing a visual slide show, choosing to let the music speak for itself. END_OF_DOCUMENT_TOKEN_TO_BE_REPLACED

You could see the relationship at work on a practical level. Repertoire for two players at the same piano requires a certain choreography. There’s just one of each pedal to share, and the hand crossings left and right — which can be so fun to watch a soloist pull off — get more complicated when another person’s involved. At times, Pompa-Baldi drew a hand away from the keyboard and into his body, making room for Friscioni, and at the close of a few delicate phrases, the two were crouched together over the same final notes at one end of the instrument. END_OF_DOCUMENT_TOKEN_TO_BE_REPLACED

The signature sounds of these famous film scores are not so much John Williams’ invention as allusions to other classical pieces. The foreboding half-step from Jaws, growing more and more furious in the cellos and basses, shares something with Dvořák’s “New World” Symphony and Bartok’s Miraculous Mandarin. END_OF_DOCUMENT_TOKEN_TO_BE_REPLACED