Would the performers address the remote audience? No, perhaps it was best that they just get right back into the swing of Mozart’s Sonata No. 21, whose contrasts they captured vividly — in particular the crisp and bold articulations against the flowing melodies in the first movement.

Contrast is even more ferocious in much of the music of Beethoven, and the duo absolutely relished it during the “Kreutzer” Sonata — or perhaps more fittingly the “Bridgetower” Sonata, based on its unusual premiere and the flip-flop over its dedication, a story which Cornelius shared in an engaging pre-recorded segment. In the wrong hands, Beethoven’s rough, wild, and sometimes vicious extroversion can come across as bland and predictable, but here it was breathtaking. On the opposite end of the spectrum, Cornelius and Charnofsky easily cooled down to calm and beautiful playing when the moment was right. 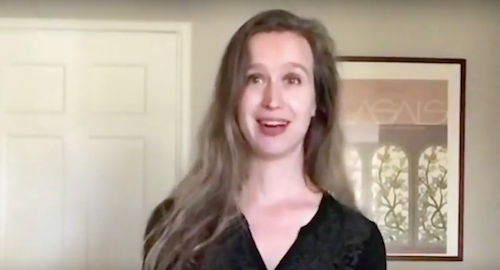 What’s great about a devilishly difficult work like this one is that the idea of perfection goes out the window. Instead, we can watch it like it’s a boxing match. The performers will invariably take a few punches from Beethoven — here, the thrill was watching Cornelius and Charnofsky come right back with their own through their tireless technique and unbeatable spirit.

One question worth asking: if shorter concerts are considered a better fit for streaming, what about the length of single works? The Beethoven goes for 40 minutes, and the evening as a whole went for 80 — both to me a bit long for this particular listening format. Though it’s no one’s fault, the delayed start probably didn’t help either.

Stravinsky’s Suite Italienne, based on his ballet Pulcinella, was the perfect follow-up: radically different in style, and divided into several short sections. In Pulcinella, considered the beginning of Stravinsky’s neoclassical period, he brought modern rhythm, harmony, and sensibility to a collection of older works largely of the Italian Baroque (at the time, they were all thought to be written by Pergolesi). The result is charming and witty, often delightfully snarky, and in this performance, Cornelius and Charnofsky conveyed not just the moments of genius, but the simple joys of this music.

There must have been a sigh of relief from all involved after the digital curtain closed. Sure, the technological issues had not gone away entirely — the video showed a tendency to glitch up — but the most important aspect of the stream was that it worked. Cornelius and Charnofsky could finish what they had started, and we could enjoy it as well.

END_OF_DOCUMENT_TOKEN_TO_BE_REPLACED

Rodgers & Hammerstein’s Cinderella was originally produced for television in 1957 — seven years after the animated Disney film was released — and starred Julie Andrews. According to the Rodgers & Hammerstein website, it was viewed by over 100 million people. END_OF_DOCUMENT_TOKEN_TO_BE_REPLACED

The story line has its origin in an 1855 play and an 1842 farce that Thornton Wilder mined for his 1938 play The Merchant of Yonkers. When that turned out to be a flop, in 1954 Wilder made the crucial decision to re-center the show around the character of the legendary marriage broker Dolly Gallagher Levi and renamed it The Matchmaker. END_OF_DOCUMENT_TOKEN_TO_BE_REPLACED

The Dodero Center for the Performing Arts at the Gilmore Academy in Gates Mills is one feature of an impressive campus. The auditorium is shallow, the stage is deep, and the ensemble played without a shell. Throughout the program, the sound, especially in instruments’ lower registers, tended to disappear. END_OF_DOCUMENT_TOKEN_TO_BE_REPLACED