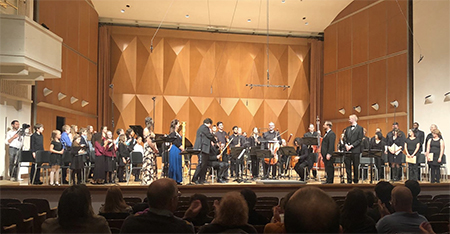 On October 19, almost a year after its debut, Margaret Brouwer’s ambitious oratorio Voice of the Lake, chronicling the most recent environmental assaults on Lake Erie, was revived in an updated version in Kulas Hall at the Cleveland Institute of Music. The affecting and nearly flawless performance conducted by Domenico Boyagian, involved soloists (Angela Mortellaro, soprano, Sarah Beaty, mezzo-soprano, Brian Skoog, tenor, and Bryant Bush, bass), the 15-member Blue Streak Ensemble and 12 voices of the Blue Streak Ensemble Chamber Singers, and the 21-voice Cleveland Institute of Music Children’s Choir.

Cast in four parts, the oratorio is bracketed by meditations on the charm the Lake holds for children, those who fish in it, and those who come to its shores for rejuvenation — until toxic blobs of sediment from dredging of the Cuyahoga River and algae blooms created by fertilizer runoffs from farms and other sources raise their discordant voices.

Part II chronicles a public hearing where different opinions are expressed about the safety of dumping sediment into the Lake. Part III is all about that algae and what is being done to correct the situation.

Most oratorios don’t take up subjects that are so overtly topical and political, but Margaret Brouwer, who wrote the libretto as well as the score, has faced the challenges of setting swaths of documentary language to music head-on. As she told this publication in a recent interview, the revised version removes much of the poetry she set in the original. “I have changed many of the words because feedback from audience members was that the poetry did not work in the context of the other somewhat scientific, environmental language. The music is the same, but the words have changed.”

There are also two new arias. A long one for tenor in Part IV reflects the character’s personality change from his representation of the river-dredging Army Corps of Engineers  in Part II to his personal reaction to seeing the green algae, realizing that something needs to be done about it. An aria for soprano and mezzo-soprano, who have been canoeing on the Maumee River and are sharing photos, also underlines personal reactions to the pollution of the Lake.

The oratorio, which ran about 90 minutes including an intermission, made a powerful impact, both through Brouwer’s expressive music and the quality of its performance under the skillful pacing of Domenico Boyagian. 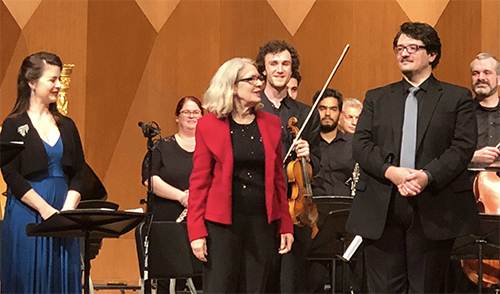 Two Angelas have sung the soprano role in performances of Voice of the Lake. On Friday, Angela Mortellaro (above) replaced Angela Mitchell, who has moved out of state, and was lyrical and compelling from the opening bars of the piece. Mezzo-soprano Sarah Beaty paired with Mortellaro alurringly in the duet that opens Act III, and went on to create an equally beautiful moment in her aria, “‘Twas in the grey of early dawn.”

First heard at the public hearing in Part II, tenor Brian Skoog made a riveting thing out of his statement from the Army Corps of Engineers — a sort of recitative cunningly crafted by Brouwer and sensitively accompanied only by pianist Shuai Wang.  In Part IV, Skoog had more dramatic material to vocalize as he walked along the shore of the Lake and saw the effects of an algae bloom (here, oboist Devin Hinzo added an expressive obbligato).

Bass Bryant Bush, who appeared in several different roles (fisherman, judge, anonymous commentator), brought authority to all of his lines.

The Blue Streak Ensemble contributed fine underpinning for the vocalists, and got its own chance to shine in the lovely early dawn interlude that begins Part III. Earlier, percussionist Luke Rinderknecht singlehandedly conjured up a fearsome thunderstorm.

One of the most memorable contributions to the oratorio was the CIM Children’s Chorus, who sang about playing in the water of the Lake with irrepressible enthusiasm in Part I, and ran onstage in Part IV to ask, “Is the lake water okay today? Can we swim today?” And later, “Please, please, please, please. Protect our Lake! Help clean it up!” Their dialogue with the Chorus, who sang, “We’re working on it. We need help.” left the end of the oratorio with a big question mark as Brouwer’s music faded away.

END_OF_DOCUMENT_TOKEN_TO_BE_REPLACED

Supported by engagingly, yet simple staging by Cara Consilvio, a well-prepared cast of singers told the archetypal story of Cinderella with charm and flair. Framing the production was  a sparse but colorful set and wonderful lighting by Dave Brooks. END_OF_DOCUMENT_TOKEN_TO_BE_REPLACED