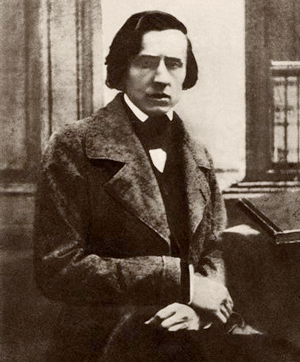 Genres: Prelude — a short piece meant as an introduction. Étude — a piece intended for study purposes and to improve technique
Scoring: Piano
Era: Early Romantic
Length: 4-5 minutes each
Will you recognize them? You’ll get the feeling you do
Recommended Recordings: Arthur Rubinstein for “Raindrop” and Maurizio Pollini for “Winter Wind” or Martha Argerich for both

Composer: Frédéric Chopin (1810-1849). Chopin (pronounced SHO-pan) established his reputation as the “poet of the piano,” as all of his works incorporate the instrument, and most of them are solo pieces. His compositions helped to define virtuosity: they are not only technically difficult, but also require incredible nuance from the performer. Chopin sought to take the piano literature to new heights, combining his unique and highly emotional style with a brilliant instinct for dramatic phrasing and melody.

Born in Poland, he was proud of his homeland throughout his life and even drew on Polish folk music for his own compositions. He established himself in Paris, and rather than develop a flashy virtuoso career, he preferred the bourgeois setting of the salon for its intimacy. Aside from performing and composing, another source of income was teaching, and he often dedicated pieces to his pupils. He also fostered a 10-year liaison with George Sand (pen name for the female novelist Amantine-Lucile-Aurore Dupin), who was a great source of inspiration.

The Pieces: “Raindrop” is the fifteenth of Chopin’s set of 24 Preludes, Op. 28. While the genre of the prelude implies that they are introductions to something, they are instead a set of stand-alone pieces. Each of the 24 is in a different key, paying homage to J. S. Bach’s Well-tempered Clavier, which is organized in a similar fashion. The name “Raindrop” was given by legendary pianist and conductor Hans von Bülow, not by Chopin. The piece begins with a slow, lamenting melody in the right hand over repeated notes in the left hand which sound like raindrops to some. A stormier section comes, where the raindrops sound like six-inch balls of hail, but the lamenting section returns and the piece ends solemnly and gorgeously. 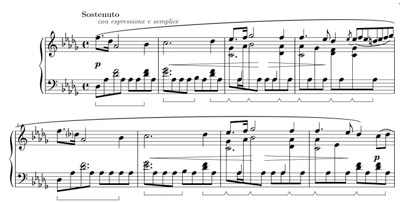 “Winter Wind” is the eleventh of Chopin’s 12 Études, Op. 25. His sets of études fuse virtuosic technique with vibrant melodies. They were intended for study but are so beautiful they have entered the standard repertoire. This étude opens with a slow introduction anticipating the blizzard that later erupts across the keyboard. Notice how the left hand (the lower-pitched notes) plays the theme of the introduction under the blustery right hand. The theme, kept mainly in the left hand throughout the étude, pushes the direction of the piece, while the right hand precipitates over it with flashes of virtuosity. It ends in the rush of a chillingly biting storm. 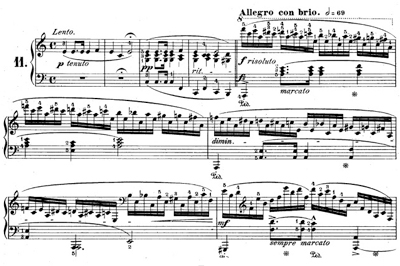 Personal Notes: I find Chopin to be an extremely subjective composer. I have to make sure I’m on the same wavelength as the piece before I listen to it. “Raindrop” is melancholic, while the excitement of “Winter Wind” carries me off in frigid turmoil. Try to find how you personally jive to Chopin, for he speaks to the poet in all of us. 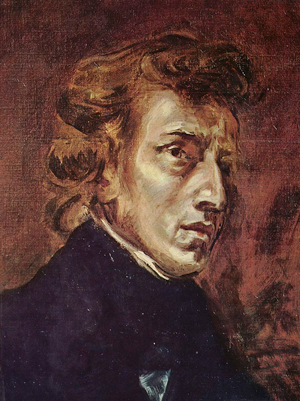 END_OF_DOCUMENT_TOKEN_TO_BE_REPLACED

Supported by engagingly, yet simple staging by Cara Consilvio, a well-prepared cast of singers told the archetypal story of Cinderella with charm and flair. Framing the production was  a sparse but colorful set and wonderful lighting by Dave Brooks. END_OF_DOCUMENT_TOKEN_TO_BE_REPLACED