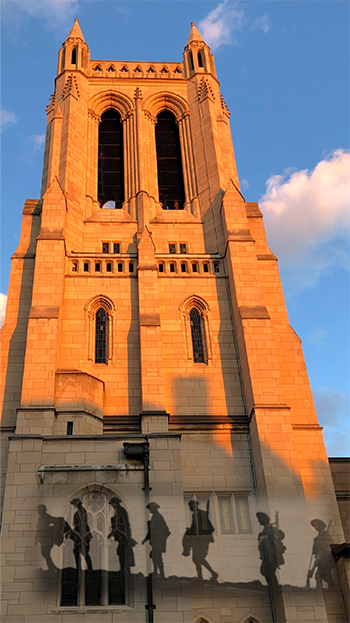 Before the holiday Americans observe on November 11 was renamed Veterans Day in 1954, Armistice Day marked the cessation of hostilities in World War I, when the peace agreement with Germany went into effect at the 11th hour of the 11th day of the 11th month of 1918.

This year, that date also marks the 100th anniversary of the end of the “Great War,” and the worldwide events planned to celebrate that milestone will importantly include the bells of the McGaffin Carillon at the Church of the Covenant in University Circle on Friday evening, November 9, and Sunday morning and afternoon, November 11.

On Friday at 8:00 pm, The Church of the Covenant and the CWRU Music Department will present Consolation, a collaborative program featuring the premiere of a new commissioned work by David N. Childs for mixed chorus, strings, timpani, harp, carillon, and handbells, to be performed by the Case Concert Choir, Church of the Covenant Chancel Choir, and the Consolation Chamber Orchestra. Solas incorporates poetry by Robert Graves and Charles Hamilton Sorley. “The McGaffin carillon has a small part as a prelude,” carillonneur George Leggiero said in a telephone conversation, “playing verses of a hymn written by a soldier.” The evening will also include music by Pearsall, Brahms, Reger, Mendelssohn, Beethoven, and Rheinberger. Tickets can be reserved online.

At 11:00 am on Sunday, the carillon will join bells around the world in tolling for 100 times. At 11:30 am, Childs will speak about his new work following its second performance during the Covenant’s 10:00 morning worship service.

Then at 3:30 pm, George Leggiero will play a 30-minute carillon concert featuring a new work by that will be heard from other towers around the world on Sunday, followed by poetry, readings, and music reflecting on World War I.

What’s the connection between bells and the Great War? Much of the destruction in that conflict took place in Belgium, famous for its bell towers and carillons, which marked the passing of the hours and played tunes beloved by the inhabitants of their towns. 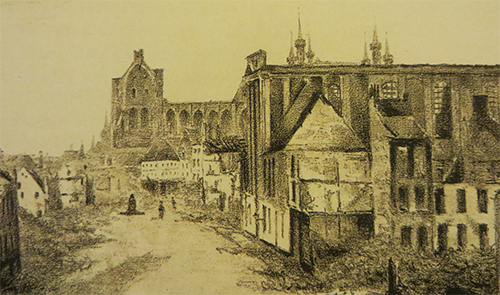 One of those carillons — in the Norbertine Abbey of Park near Leuven — was destroyed in 1914 by German soldiers from the city of Neuss. To mark the centenary of the end of World War I, the bells have been reconstructed, and the new Peace Carillon will be inaugurated on November 11, an event to be attended by officials and guests from both Leuven and Neuss.

Geert D’Hollander, carilloneur at the Bach Tower in Lake Wales, Florida, has written A Sacred Suite for the occasion, which will be performed around the world on Sunday, and here in Cleveland by McGaffin carillonneur George Leggiero on his afternoon program. 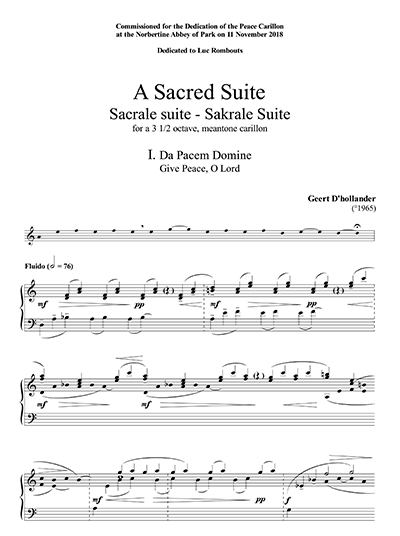 D’Hollander has written in the preface to the suite, “The work is based on three Gregorian melodies that sounded in the first half of the 16th century on automatic carillons in the Low Countries, including the Norbertine abbeys of Tongerlo and Averbode. The melody of the first movement is a hymn of peace, in line with the mission of the new abbey carillon, a realization of the cities of Leuven (Belgium) and Neuss (Germany) and more than 300 donors as a symbol of peace and reconciliation.”

Leggiero said that his program will also include Edward Elgar’s only work for carillon, a piece written in 1923 for the Loughborough Memorial Chimes, as well as a piece written for the dedication of a war memorial carillon at the University of Sydney in Australia. “Then at 4:00 pm, we’ll have a presentation of literature and music reflecting on World War I in poems and letters. Some will be read by Alexander McGaffin’s grandchildren. He was associate pastor at the church, and took a leave from the Covenant to join the YMCA at the front lines.” The event includes music by Elgar, Karg-Elert, Debussy, Hovhannes, Strauss, and others for organ, flute, and voice, with a free reception to follow

As modern timepieces were invented, the importance of bells diminished and the art of bell making and casting declined in Europe. It took the ravages of war in the early 20th century to inspire the revival of the art, Leggiero said. “In addition to the massive destruction of buildings and towers, they mined the bells themselves for metal. The rebirth of the bell industry grew up quickly afterward with the construction of war memorial towers. By the 1920s and ‘30s, carillons were jumping the pond into North America.”

The McGaffin Carillon was one such project, designed by the Dutch firm of Royal Eijsbouts, installed in 1968, and now celebrating its 50th anniversary. This weekend’s programs won’t be the first time those bells have been used to memorialize World War I. When the Friends of the McGaffin Carillon was established, one of their inaugural events was the 2014 centennial of the Christmas Truce when soldiers came out of their trenches in a series of unofficial cease-fires. “I played Silent Night and other carols that we know were sung on that occasion,” Leggiero said.