In what’s become a reliably annual visit to The Cleveland Orchestra, Nicholas McGegan brought his British-born charm and wit to the Severance Hall podium on Thursday, November 21 for an alluring program of music by Schubert and Haydn, separated by a brilliant performance of Hummel’s Trumpet Concerto by Michael Sachs.

The evening began with four of the nine movements Schubert wrote as incidental music for Helminia von Chézy’s play Rosamunde, Princess of Cyprus, beginning with an Overture the composer harvested from his earlier opera Die Zauberharfe, and continuing with two ballets and an entr’acte.

Lovely wind solos punctuated by dramatic chords introduced the Overture, which moved on to a cheerful allegro where McGegan called for short chords, letting air into the texture and creating a sense of space.

Gentle, tuneful dialogues between oboe (Jeffrey Rathbun) and clarinet (Afendi Yusuf) and interesting harmonic progressions abounded in the first ballet, and McGegan joined in the fun during the second, dancing his own jig on the podium. The trombone section was singled out for a rare stand-up at the end. 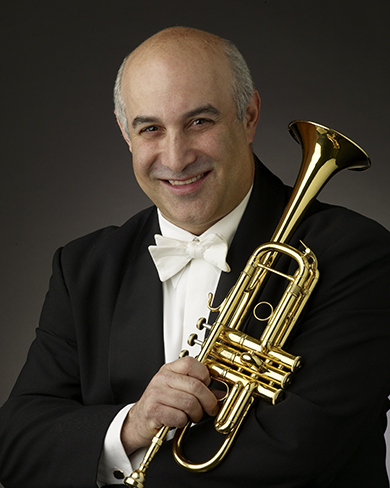 If you lined up Michael Sachs’ performances of Johann Nepomuk Hummel’s Trumpet Concerto from 1982 and 2002 and compared them with Thursday’s version, you’d notice that the piece sounded much brighter this time around.

As the Orchestra’s principal trumpet explained in a preview interview with this publication, the Concerto, originally written in 1803 in the key of E, was published in E-flat in a 20th-century edition to make it more marketable to performers using B-flat trumpets. Sachs played the piece in E-flat himself on those previous occasions, but used a special trumpet and reverted to the original key of E for this set of concerts.

Toward the end of the orchestral introduction, Sachs’ fanfarish solo entrance came as a beautiful surprise. His elegant, shining tone and flawless playing graced the whole of the three-movement piece, including the long trill in the Andante, and the peppy concluding Rondo — which threatens to morph into the end of the William Tell Overture. Sachs was rewarded with a big, long ovation.

McGegan’s clean, lean, and spacious shaping of Haydn’s Symphony No. 104 ended the evening. Here, as earlier, the Cleveland Orchestra musicians were putty in the conductor’s batonless hands, especially in the expressive Andante. If you went on your way after the warm ovation whistling the infectious Rondo tune, thank both Joseph Haydn and Nicholas McGegan — each of them masters at communicating with their audiences.

The latest program, which visits the ghetto and palace at Mantua and the ghetto and church at Venice, uses expressive instrumental music by Salamone Rossi, Giuseppe Sammartini, Antonio Vivaldi, and Alessandro Marcello, two of Benedetto Marcello’s 50 psalm settings, and Hebrew prayers and songs associated with Passover and Purim to evoke the rich cultural life of those towns. END_OF_DOCUMENT_TOKEN_TO_BE_REPLACED

Episode 7 of The Cleveland Orchestra’s pre-recorded In Focus series is the shortest so far, clocking in at only 37 minutes. But the emotional impact of Dmitri Shostakovich’s bleak Chamber Symphony in c followed by the calm, shimmering hopefulness of Olivier Messiaen’s Le Christ, lumière du Paradis (from Éclairs sur l’Au-Delà) is out of all proportion to the length of the music.

The Shostakovich is an arrangement by Rudolf Barshai for string orchestra of the composer’s String Quartet No. 8, a work directly inspired by the firebombing of Dresden, an attack toward the end of World War II that claimed more victims than Hiroshima. END_OF_DOCUMENT_TOKEN_TO_BE_REPLACED

Plenty of pre-recorded concerts have offered audiences some sort of new and compelling experience. But few organizations have mined that format with as much joy and silliness — and in general, personality — as Cleveland’s new music ensemble No Exit. That trend continues with their latest video, released on March 26 and centered around music by Cleveland-area composers.

You won’t want to miss the opening remarks, which turn the obligatory into a comedy routine. One of the best lines delivered by the shadowy head of artistic director Tim Beyer: “Recently, we’ve been flooded with letters from little boys and girls from around the country, all of them asking the same question: Tim, how can we give money to No Exit?”

END_OF_DOCUMENT_TOKEN_TO_BE_REPLACED

When my colleagues and I have the opportunity to both interview and review an artist, it becomes interesting to see whether the ideas behind their program translate to the actual performance. Sometimes, from my perspective, they don’t, but the concert might still flourish in some other, unforeseen way.

And occasionally, everything comes together brilliantly, almost exactly the way the artist described. That was the case with Caroline Oltmanns’ online recital for the Tri-C Classical Piano Series on March 21, which she pre-recorded at home for the occasion.