The plangent sounds of Merima Ključo’s accordion, combined with an arsenal of musical effects from pianist Seth Knopp and evocative video art by Bart Woodstrup, told the affecting saga of a medieval Jewish prayer book last Wednesday evening in Gartner Auditorium at the Cleveland Museum of Art.

The 50-minute multimedia work entitled The Sarajevo Haggadah: Music of the Book sketched in understated musical and visual imagery the extraordinary travels of a modest little manuscript of Passover prayers. A  pre-concert introduction was given by author Geraldine Brooks, who first learned about the Haggadah while covering the Siege of Sarajevo for The Wall Street Journal, and wrote about it in her 2008 historical novel, The Sarajevo Haggadah: People of the Book.

Dating from 14th-century Spain, the book went through many hands before ending up in Bosnia, having been rescued from destruction by such unlikely figures as a Jesuit priest in Venice and a Muslim imam in Sarajevo — who hid it from the Nazis in the library of his mosque during World War II after it was smuggled out of the Bosnian National Museum by its chief librarian.

Ključo developed her composition during a residency at Yellow Barn in Putney, Vermont, basing her music on the scales and rhythms that Sephardic Jews and Bosnians share, and relating the “exodus” of the Haggadah to her own flight from Bosnia. Seth Knopp, the pianist for the project, is executive director of Yellow Barn.

The piece is divided into a dozen movements that follow the Haggadah’s journey from Spain to Bosnia, including “La Convivencia,” the idealized, four-century period when Jews, Muslims, and Christians lived in peace under Moorish rule in Medieval Spain; “Al Mora,” based on the book’s illustration showing a Moorish woman at a Seder table; “Alhambra Decree,” the expulsion of Jews in 1492 under pain of death; the book’s journey to Italy and its preservation by a priest of the Inquisition; its survival of the Nazi regime and the 1992 Siege of Sarajevo; and a concluding benediction by a mother who had never learned Hebrew and considered Ladino to be her Jewish language. 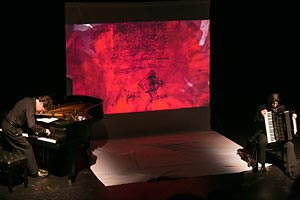 The concert began with sighs from the accordion as Ključo filled its bellows with air. The music that ensues is evocative but minimal, suggesting rather than depicting. Bart Woodstrup’s video art takes its departure from illustrations in the Haggadah, details of which float up in layers as if emerging from water, then fade back again.

In more dramatic moments, swastikas followed by images suggesting the Siege scream onto the screen and musical gestures turn violent. Ključo brought the full power of the accordion’s lungs into play and Knopp reached inside the piano to create sonic outbursts from the strings.

Multimedia works are always tricky. Musically-oriented people tend to listen to the music and often find video accompaniment distracting. Visually-oriented people concentrate on the images and sometimes shut out the music. Few seem to have the ability to multi-task and take both in at once, and those who try to do that usually expect some temporal connection between music and images. In Ključo’s piece, linkups were suggested but not completely realized.

Still, The Sarajevo Haggadah: Music of the Book is an affecting piece. Powerful in its reticence, Ključo’s work proves that much of the time, art speaks most profoundly when it says what it needs to convey in just a few words — or in this case, sounds and images.

Supported by engagingly, yet simple staging by Cara Consilvio, a well-prepared cast of singers told the archetypal story of Cinderella with charm and flair. Framing the production was  a sparse but colorful set and wonderful lighting by Dave Brooks. END_OF_DOCUMENT_TOKEN_TO_BE_REPLACED

END_OF_DOCUMENT_TOKEN_TO_BE_REPLACED

The music isn’t easy to play, either. Over the course of two hours, all of the musicians brought fantastic focus to the unrelenting tricky rhythms and countless layers of parts, all of which require a high level of individual responsibility. Even in the moments of calm, the accompaniment remains perpetually unsettled. Adams — who made a sprightly presence on the podium — combines minimalist, repeating motives in gradual layers, which eventually become so dense they overwhelm the senses. Lisa Wong deserves special mention for her thorough preparation of the Cleveland Orchestra Chorus, as does Jennifer Rozsa for the Children’s Chorus, which made a brief but memorable appearance in the last few minutes. END_OF_DOCUMENT_TOKEN_TO_BE_REPLACED