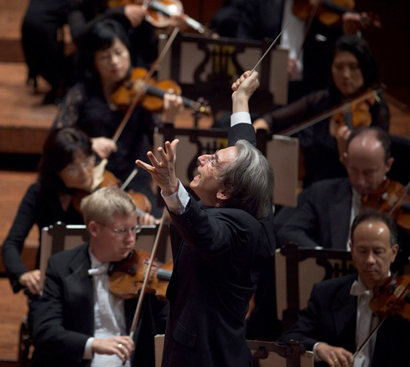 The San Francisco Symphony played to a packed house in Severance Hall Saturday, showcasing their adventurous programming and daring emotionalism. At the cusp of turning 70 (who could believe it!), longtime San Francisco music director Michael Tilson Thomas (known as MTT in the Bay Area) gleefully presided over a pre-Thanksgiving feast of sound.

Though in the midst of a grueling US tour — successive nights in Ann Arbor, Cleveland, and Boston and two Carnegie Hall appearances — the orchestra showed no evidence of fatigue. The luminous acoustics of Severance and the enthusiasm of what seemed a very young audience, no doubt contributed to the high energy level.

The orchestra and MTT came out swinging with a dazzling performance of Liszt’s Mephisto Waltz, No. 1, a heated evocation of Faustian orgiastic excess. Big orchestral swells (supported by an enormous percussion battery including a cranked wind machine) swerved suddenly into lyric moments of tenderness, replete with charming nightingale calls from the flutes, and lovely solo riffs from the concertmaster and principal cellist.

Especially remarkable were the violins, whose stunning accuracy and facility were only topped by the sheer verve and snap of their musicality. Liszt is not known as a composer of subtlety, but I consistently found myself drawn into the fine, intricate energies projected by the San Francisco players.

It takes the courage of one’s convictions to program the clarity of Mozart after the passion of Liszt, but here it paid off. With the thrilling Israeli violinist Gil Shaham backed up by a reduced orchestra, Mozart’s Violin Concerto in A proved more than a match to Mephistophelean romanticism.

The lovely and delicate rising arpeggios of the opening movement established a joyful sense of uplift that lasted all through the concerto, even when the adagio took us into a more reflective mood. At the heart of it all was Shaham, whose utterly clear tones spun forth like optical fibers, full of transparency and radiance. The famous third-movement Rondo, the so-called “Turkish” theme, completed the concerto with charm and inventiveness: each return of the main theme brought something new, and something newly enchanting.

Repeated curtain calls for Shaham had the desired result: a lovely encore in the form of another rondo, this time the Gavotte from Bach’s third partita for solo violin.

Under MTT, the San Francisco Symphony has been a noted proponent of young American composers. Samuel Adams’s Drift and Providence, (2012) followed the intermission. It is an acoustic adventure in itself, involving an enormous orchestra including eight or more percussionists, with the composer himself at the back of the hall manipulating the electronic soundscape in real time. Adams’s electronic enhancements were generally subtle but at times startling: the sandpaper blocks and brake drums of the percussion section at times swelled up through the sonic landscape, and then quietly faded back as the “regular” orchestral sounds took over.

For a composer who explicitly references “noise theory,” Adams has created a remarkably tonal and recognizably orchestral piece, one that is at home with Liszt and Ravel, if not quite with Mozart. Color moments, “blue notes,” and virtuosic string playing are part and parcel of the late romantic and early modern vocabularies of, say, Stravinsky. Here they are punctuated by notably post-modern silences, some which seem to have structural meaning (the beginning of a new section, perhaps), others of which rest the ears and allow for new waves of sound. It’s a piece that demands a great deal from the orchestra, but also promises a great deal from this young San Francisco composer.

The culmination of the concert was Ravel’s ecstatic Daphis and Chloe — the second suite, taken from the ballet music he wrote for Sergei Diaghilev’s Ballets Russes in 1912. In Ravel’s over-the-top orchestration of this pastoral romance, all the resources of a large modern orchestra are brought to bear. (The piece calls for an optional, wordless chorus, omitted here.)

The poet Jean Cocteau said of Daphnis and Chloe that it “lands in our hearts like a meteorite.” No dinosaurs were harmed in producing this concert, and yet it did have that kind of impact: stunning, thrilling, decadent, and also a little bit dirty. Here was where we could witness MTT at his best: pushing, leading, prodding the orchestra to take more and more risks, and pulling it all off. Gorgeous viola section solos, luscious alto flute, horns to die for, a little oboe band, a spectacular flute solo channeling the nature-god Pan — it’s no wonder the curtain calls and solo bows went on forever.

The (for once deserved) standing ovation brought MTT back for an encore, the elegiac Last Spring of Grieg, one of a dozen such pieces featured on San Francisco’s recent CD, Masterpieces in Miniature. It was that, a miniature and a masterpiece.

The cimbalom was the feature of the show, an instrument capable of taking on many personas. Its performer, Chester Englander, has shaped his career around the instrument, and has inspired composers to write more repertoire for it, some of which was presented on the program. END_OF_DOCUMENT_TOKEN_TO_BE_REPLACED

You wouldn’t expect that acoustic from a glance at the nave, which is wide and long, but not especially lofty. But when I guest conducted a local amateur choir and professional orchestra in Beethoven’s Mass in C there a few years back, during the first rehearsal we released the final chord of the “Gloria” and listened in astonishment for the next several seconds. The sound continued to roll down the space like the big wave that surfers dream about. END_OF_DOCUMENT_TOKEN_TO_BE_REPLACED