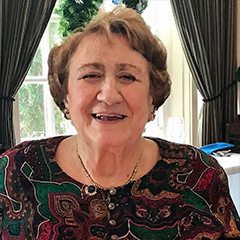 On Thursday, December 21 at 3:00 pm, the well-known Cleveland piano pedagogue Olga Radosavljevich will be honored with an 80th Birthday Concert in Kulas Hall at the Cleveland Institute of Music, where she has taught for nearly six decades. The free event will feature performances by some of her many students, including Cicilia Yudha, who studied with “Miss Olga” for eight years in the Young Artist Program, and now serves on the piano faculty at Youngstown State University.

Yudha told ClevelandClassical.com that Miss Olga’s daughter, Kathy Manker, asked her to write her mother’s biography. “I spent a few afternoons with Ms. Olga earlier this Fall and finally drew the courage to summarize her incredible journey from Yugoslavia to Cleveland and her 57-year tenure at CIM,” Yudha said. Here is the result of those interviews.

Olga Radosavljevich, or Miss Olga, as many know her, was born in Serbia (then part of Yugoslavia) on December 19, 1937. Three months after her third birthday, as World War II was about to erupt, her father — a general in the army — had to leave Miss Olga and her mother. She still remembers details of that evening with vivid clarity.

Miss Olga grew up in the city of Belgrade with her mother and grandmother. Life was challenging as the country was disintegrating. There was constant tension between the partisans and the ordinary people. Miss Olga and her family had to share their house with three other families, and they lived off her grandmother’s small pension. In addition, her mother would sell or exchange their belongings for a little bit of money.

Regardless of life’s challenges, Miss Olga’s mother ensured that Miss Olga received a proper education. After one year of piano lessons with her mother, she began training at the Music Academy when she was four years old. She also took French and ballet, and often went to concerts. In high school, she fulfilled the mandatory military service. Not long after, due to the political and social tensions that affected her education, Miss Olga enrolled in the French baccalaureate system and graduated early.

Miss Olga’s father, General Vojislav Radosavljevich, was captured in Bosnia in 1941 and sent to a prison camp in Nürnberg, Germany. At the end of the war, the American and Yugoslav governments agreed to reunite the families separated by the conflict. Not wishing to return to her war-torn homeland under the communist regime of Josip Broz Tito, General Radosavljevich emigrated to the United States in 1951. He first worked in a hospital kitchen in South Bend, IN, then moved to Cleveland to work at a metal factory called Morrison Products.

Preparations for Miss Olga to come to the United States began immediately. Having taken Latin, English, and French in school, Miss Olga now took extra English classes at the American Cultural House in Belgrade. She read many cowboy books and watched lots of movies in English. She also took typing, stenography, sewing, English for business administrators, and economic courses. After Miss Olga finished her formal education a year early, she was recommended to work in the accounting department in the American Embassy. During that final year in Belgrade, Miss Olga earned a good income, three times the average wage.

At last, the family reunited on September 11, 1956, living in an apartment on East 152nd  Street in Cleveland.

The Music Academy that was an integral part of the Music Conservatory in Belgrade honed Miss Olga’s training at an early age. Later, it inspired her to set up the Preparatory Piano Curriculum, the Young Artist Program, and Camp Klavier at the Cleveland Institute of Music. Her piano teacher, Danica Stanisavljevich, was a student of Alfred Cortot in Paris. At first, she had lessons twice a week. The lessons were then supplemented with theory classes, and in middle school, music history courses were added to her curriculum. According to Miss Olga’s recollection, the topic of whether or not she was talented never quite came up. However, there was a constant cultivation of music.

Miss Olga was almost eighteen years old and in her second year at the conservatory in Belgrade when she left for Cleveland. Although the only American music conservatory she knew was Juilliard, on her second day in Cleveland, she noticed the Cleveland Institute of Music enroute to the employment agency (where, by the way, she was immediately hired as a page at the downtown public library for 90¢/hour). CIM’s president, Ward Davenny, received Miss Olga warmly and allowed her to practice at the school. Six days later, Miss Olga auditioned and took placement exams.

Miss Olga entered Arthur Loesser’s studio at CIM and placed as a second-semester junior. In 1959, Anthony Kuerti (Rudolf Serkin’s student at Curtis) suggested that Miss Olga audition at the Juilliard School. She was accepted in Rosina Lhévinne’s studio and was invited to live with Madame Lhévinne to help care for the older pedagogue.

Miss Olga recalled that the acknowledgement of her abilities and the prospect of opportunities to succeed were the highlights of her personal and professional life at the time. However, her father was apprehensive about separating a family that had just recently reunited, and about the prospects of a young woman living in a big city where many musicians were unemployed. Thus, Miss Olga declined Juilliard and continued her studies at CIM. While some might consider her father’s decision cruel, Miss Olga adopted a youthful resilience and now understands her father’s “wartime survival philosophy.”

While taking piano pedagogy with Ruth Edwards at CIM, Miss Olga was appointed as a preparatory faculty member in 1960. A year later she began working with former pupils of Artur Schnabel, Victor Babin (newly-appointed president of CIM), and his wife, Vitya Vronsky. She clearly remembers her audition and her first lesson on Franz Liszt’s B-minor Sonata with Babin. As teachers, Vronsky and Babin were uncompromising in their demand for the highest excellence from their students.

Masterfully juggling a professional careers as a performer and a teacher with the demands of being a young mother, Miss Olga completed an Artist Diploma program in three years under Babin and Vronsky’s tutelage.

“Any person can be taught. How they are taught, that is a different matter.” With artistry chiseled over decades of practice and having taught countless students of various ages and levels, Miss Olga aims for each of her students to learn the discipline and understand all aspects of musicianship. She always discusses the importance of discerning ears in sound production, clarity of rhythm, proper stylistic interpretation, historical background, natural ways of playing the piano, and the intentions of composers. She nurtures and cares for her students’ overall development, not just as pianists and musicians, but also as responsible human beings.

Moreover, she instills in her students sensitivity to time management, whether it is the time that it takes to learn and polish a piece of music, to prepare a recital (dress, shoes, and all!), or to develop as a mature musician over the course of a degree program. Though her method of delivery certainly has transformed over the years, her teaching philosophy remains unwavering. Some students may recall a quote from Rachmaninoff posted outside her studio at CIM: “Music is enough for a lifetime, but a lifetime is not enough for music.” 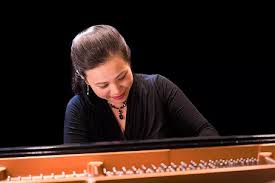 Cicilia Yudha: What are some things that you like or that you dislike to do?

Olga Radosavljevich: I never had the privilege to develop “what I like to do.” But when I was growing up, no one was allowed to work on Good Friday. I always looked forward to that day every year — a day I would not have to practice and I could play in the foyer with my little broken dolls.

I dislike giving an opinion to a student, having to choose to tell a student the truth or not, putting phrases in a politically correct manner, and feeling like I might need to lie to a student.

CY: What are your strengths?

OR: My organizational skills. I have always liked multitasking and management. [This is evident in her instrumental work at the Meadowmount School of Music, Encore School for Strings, CIM Preparatory, and Camp Klavier.]

CY: What are your weaknesses?

OR: Sensitivity to injustice in whatever ways it shows up. I am not resilient to injustice and I have had to face it in many different forms.

CY: What do you think about first thing in the morning?

OR: My to-do list (sigh). The routine has been established — I check the list at night and make a new one in the morning. Not knowing what to do next has never been a part of my life. It was certainly very important in my development.

OR: I don’t have any. [Later on, she admitted her love for old movies, like All This and Heaven Too with Bette Davis and Charles Boyer.]

CY: What do you do to relax?

OR: These days, I like to watch comedies on TV, like Everybody Loves Raymond. I love the mother-in-law character. In the past, I never had such a luxury. Before I had a family, there was always practicing and teaching and concerts to attend. I also traveled quite a bit with the family. [The Island of Capri was a favorite destination of hers.]

CY: What are some memorable concerts that you’ve attended?

CY: Who are some influential musicians who inspire you?

OR: I appreciate a person who is completely cultivated in every possible human endeavor. For example, Rudolf Firkušný, Daniel Barenboim, Rudolf Serkin, Arthur Loesser, Martha Argerich.

CY: Do you have a life motto?

OR: “Always be prepared.” I was probably taught this idea quite early in life. You may not actually always be prepared but you would have a different energy when facing a crisis.

END_OF_DOCUMENT_TOKEN_TO_BE_REPLACED

Supported by engagingly, yet simple staging by Cara Consilvio, a well-prepared cast of singers told the archetypal story of Cinderella with charm and flair. Framing the production was  a sparse but colorful set and wonderful lighting by Dave Brooks. END_OF_DOCUMENT_TOKEN_TO_BE_REPLACED