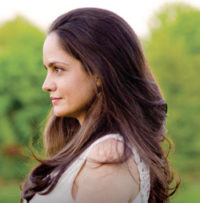 “I’m excited about this particular program because I’ve been doing the ‘Beyond Boundaries’ project for many years,” vocalist Amanda Powell said during a telephone conversation. In the past the project has focused heavily on jazz. “I’ve always wanted to create an iteration of it that included some folk artists. And this program is the beginning of that leg of my exploration.”

On Sunday, May 13 at 4:00 pm at First Church in Oberlin, Music at the Meeting House will present Amanda Powell, lutenist Brian Kay, and bassist Dave Morgan in a free concert titled “Beyond Boundaries: Songs of the People.”

Powell said that she and her colleagues came up with the idea for Sunday’s program when they were creating another project for Apollo’s Fire. “Brian Kay is a multi-instrumentalist who specializes in early music as well folk music. He and I have collaborated a lot with Apollo’s fire — we directed a show for them last summer called ‘Mediterranean Roots,’ which we will bring back to life in a new version this summer, and I’ve invited Dave to be a part of it. When we were working on that project, the three of us decided that we wanted to do a ‘Beyond Boundaries’ program together. This concert is our first chance to do that.”

It was the program’s subtitle that guided their repertoire choices. “When we were choosing the set list, I kept thinking of the theme Songs of the People in the sense of exploring folk music from different places and time periods.”

The set list will feature Appalachian, early English, Arabic, Irish, and Nigerian music. “I’ve also put together a work from Palestinian and Israeli prayers for peace — two different prayers from nations that are living on the same soil and trying to find their voices. I think people are going to hear music that represents the human experience and spirit throughout time and from many places. It was a challenge to make sure we include everything that we want without giving the audience whiplash as we journey through, but we tried to craft the order in a way that will allow people to make the connections between an early John Dowland piece and a modern composition by Brian Kay.”

The vocalist said that she also looks forward to “sharing the front of the stage” with Kay. “Brian is a person who can pick up any instrument and make it sound magical — he’s a lead singer and instrumentalist. We have performed some great improvised programs together and we’ve always had a blast going from blues to early music to Arabic folk music.”

Powell called Kay and Morgan “great musicians.” But another reason she thinks the partnership works so well is that they all share similar philosophies about music and what it can mean to a society. “I teach at Cleveland State and Dave teaches at Youngstown State. We see the academic realities of music, and how sometimes students can get burned out because they forget why they are pursuing music to begin with — they lose the passion. Part of our passion as educators is to help students remember the core of why they are doing it.”

Published on ClevelandClassical.com May 8, 2018.

It might seem that there’s not a lot left to discover after three decades of experience with the Red Priest’s charming and evocative score, but this performance boasted a secret weapon: the young Spanish violinist Francisco Fullana, now the Orchestra’s artist-in-residence, whose affecting personality and easy virtuosity raised the solo part a quantum leap above the merely extraordinary. END_OF_DOCUMENT_TOKEN_TO_BE_REPLACED

END_OF_DOCUMENT_TOKEN_TO_BE_REPLACED

The Cleveland Orchestra’s second performance of the new season on Sunday afternoon, October 17 at the newly renamed Mandel Hall at Severance Music Center was just such an occasion. If the ensemble’s return to public concerts under the baton of Franz Welser-Möst wasn’t enough reason to light a bonfire, the Cleveland debut of a new work written for one of the Orchestra’s most popular soloists, and the swan song of one of its longest-serving members added extra fuel to the celebration. END_OF_DOCUMENT_TOKEN_TO_BE_REPLACED