Flutist Alexa Still started things off with Eve Beglarian’s I will not be sad in this world, floating gracefully through the little twists and turns of the folk-like melody, and tracing the rising and falling tension sensitively. Beglarian pairs the flute with chant-like electronics — a brilliant combination if the player can achieve the right timbre. Still did just that, with the result being a compelling and uncanny sense of both similarity and difference. 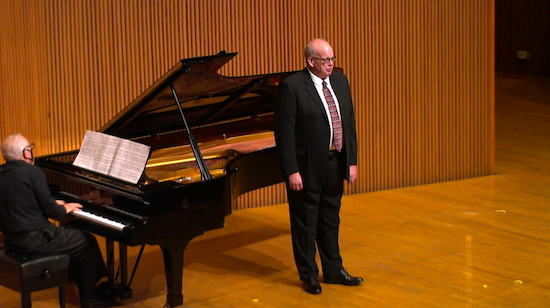 From the first movement of Ravel’s Don Quichotte à Dulcinée, baritone Timothy LeFebvre’s flexibility of tone was evident as he moved convincingly from the smooth to the boisterous. The following movements only confirmed that ability, showcasing his expressive beauty, then both his battle cry and his sense of humor, augmented by subtle but effective physical gestures. Pianist Peter Takács was the consummate artistic partner throughout: graceful in accompaniment but also emphatic when the music called for it, like in his spectacular support of the second-movement climax, and his memorable bang to finish out the piece.

Given the composer’s unique melding of the Romantic and the darkly modernist, the stellar performance by the Verona Quartet and pianist Scott Cuellar, and the otherwise excellent production quality, it was easy to disregard the video feed going in and out of focus around the start of Grażyna Bacewicz’s Piano Quintet No. 1. In general, she shines the spotlight most brightly on the strings, and from the get-go, the Verona took advantage. Thoroughly synced up in rhythm, intonation, and powerful expression, they were a true single unit. Cuellar shone in his own solo moments, such as the playful melodies of the second movement and the mysterious opening of the third. 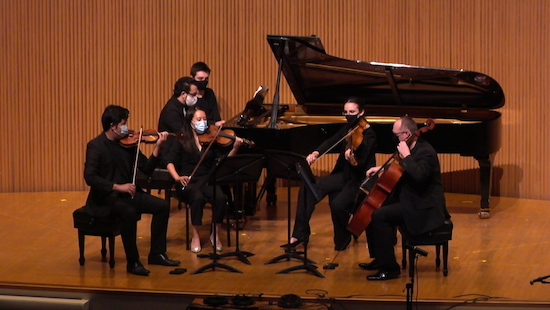 A jazz ensemble consisting of trombonist Jay Ashby, percussionists Jamey Haddad and guest Dylan Moffitt, and students from the Performance and Improvisation program — three string players and a pianist — came together to conclude the evening with music by a pair of Brazilian composers: Edu Lobo and Claudio Roditi.

After a lengthy pause for the large change of stage, Ashby brought you right back into the zone with his relaxed and groovy solo to open the first piece. Other snapshots from this mellow and colorful music: Haddad’s expressive brushstrokes at the drum set, and a violin solo that cleverly combined Romantic classical language and jazz. 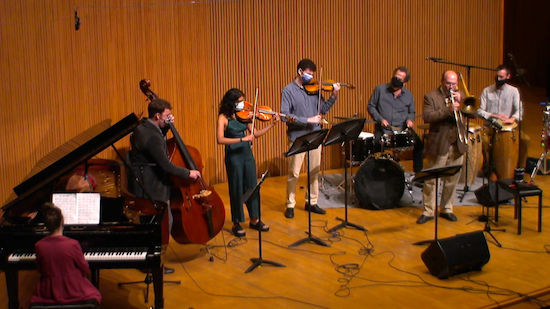 The energy ratcheted up for the closer, its joyful melody offering perhaps a hint of ragtime. Vibrancy emanated from Haddad’s drum set, invention from Ashby’s trombone, imagination from Moffitt’s tambourine. And one by one the student musicians brought their own creativity to the table, offering up bits of bluegrass, unexpected syncopations, and the vivid expression of plain old fun.

In between pieces throughout the concert, creative writing professor Robin Beth Schaer delivered sensitive readings of poems that touched on interesting and varied emotions related to music and sports. A slight echo from the microphone made the texts a little hard to follow, but the poems about basketball stood out, perhaps easier to grasp aurally with their visual language about movement and space.

Connections between the music and that larger theme were not clear, at least from my limited interaction with the festival, which was too bad considering the fascinating topic at hand. But Sibbi Bernhardsson seems to have had other motives when it came to programming. As he told Erich Burnett in an interview, what was on his mind was celebrating the return to public concerts, and his focus was simple: the fun and the beauty of music.

END_OF_DOCUMENT_TOKEN_TO_BE_REPLACED

Then, you heard all the qualities that make for a stunning soloist. Winner of the 2013 Cleveland International Piano Competition, Khristenko was back in town this month for a recital in Piano Cleveland’s summer series, Piano Days @CLE. And he couldn’t help but revel in the spotlight a little, even as he settled into a more collaborative role at the keyboard for his program, “Stanislav and Friends.” END_OF_DOCUMENT_TOKEN_TO_BE_REPLACED