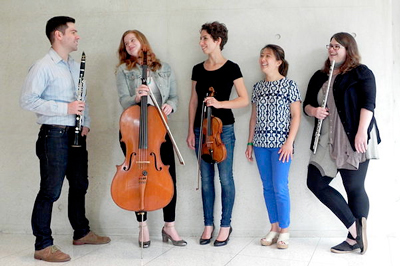 Since performing its inaugural concert in 2013, the Cleveland-based new music ensemble Ars Futura has quickly established itself as a dynamic force in the area’s burgeoning contemporary classical music scene. Judging from their engaging BOP STOP performance on Monday, March 23rd as part of NEOSonicFest, the ensemble is not only a collective of six accomplished players, but flutist Madeline Lucas Tolliver, clarinetist Drew Sullivan, violinist Tara Lynn Ramsey, cellist Daniel Pereira, pianist Shuai Wang and percussionist Luke Rinderknecht also know how to present the music in a way that leaves you wanting more.

Their well-crafted program coupled with the laid-back atmosphere of the acoustically pleasing BOP STOP was a winning combination.

The evening began with American composer Lou Harrison’s Varied Trio, a 20-minute work for violin, piano and percussion. The work is inspired by Harrison’s interest in the music of non-Western cultures into his compositions, and here his passion for the Javanese gamelan is in full evidence. Pentatonic scales are abundant and techniques such as the plucking and strumming of the strings inside the piano add to the work’s somewhat mystic qualities. In the percussion, the tapping of rice bowls and upside-down pie pans adds unique timbres to the work’s color palette. Throughout, the players performed with distinction both as an ensemble and during the work’s many individual solo passages.

Introducing Messiaen’s Le Merle Noir (re-visited) for flute and piano, Madeline Lucas Tolliver briefly explained that the work was structured around a series of pitches evoking the sounds of a blackbird, adding that she and Shaui Wang thought it would be interesting to explore through improvisation what the birds are doing before Messiaen’s piece begins. Beginning seated, Lucas Tolliver and Wang created an inventive prelude to the work as each player skillfully foreshadowed things to come. To mark the beginning of Messiaen’s music, Lucas Tolliver stood and stepped to the music stand as she and Wang delivered a performance that was aurally intoxicating.

Robert Paterson’s Star Crossing (1999), for flute (plus alto flute and piccolo), clarinet (plus bass clarinet), piano and percussion, is a musical conversation between the piano and the rest of the instruments. Like many conversations, there are agreements and disagreements between parties, which hopefully conclude with a consensus among the group. And Paterson’s piece is exactly that. The players toss musical ideas back and forth until a driving unison section of repeated notes brings the discussion to a close — a fitting conclusion to the first half of the program.

The second half began with Cleveland composer Jeremy Allen’s Broccoli September, scored for the full Ars Futura ensemble. Allen, who was present at the concert, told the audience that his six-year-old son had given the piece its title, but that he did not want any meaning to be attached to it. He went on to say that although each player had received his or her part well in advance of the concert the performance, by design, would be the first time all six players would hear their colleague’s parts. Roughly nine minutes in duration, Broccoli September is a dreamy work in seven sections. The composer, who was seated in front of the ensemble, indicated when it was time to transition from one section to the next. After a slow clarinet introduction, each section is scored for a different combination of instruments. All in all Broccoli September is a very listenable piece guided by an intriguing concept.

Keith Fitch’s Come soon, come soon (2000) for cello and piano is a hauntingly beautiful work inspired by the Armenian photographer Yousuf Karsh’s portrait of W.H. Auden. Fitch, who was also present at the concert, explained that at the time of the photo shoot, life had taken its toll on Auden’s appearance and consequently the poet was unhappy with the initial results. In writing to Karsh requesting a re-shoot, Auden pleaded ‘come soon, come soon,’ and shortly thereafter passed on. Beginning with a long expressive solo in the cello that takes profit of the expansive range of the instrument, the music is full of mournful cries depicting the poet’s premonition of his demise. Following a series of thunderous chords in the piano, the cello line, with its tremolos sliding higher and higher, gradually fades into the hereafter. Cellist Daniel Pereira, who produced a dark, focused sound throughout, was the epitome of technical control, and pianist Shuai Wang was a sensitive collaborator.

The full ensemble concluded the evening with a rousing and tight performance of Mario Davidovsky’s Flashbacks (1995), itself a flashback to the academic style of earlier decades. In doing so, Ars Futura proved they are a group capable of stepping up to the challenges of every style and sub-style of music — an admirable trait that has become a requirement for players in the ever-evolving world of contemporary classical music.

Bianca Ciubancan (16, Chicago, Ill) began the afternoon session with Jessie Montgomery’s Rhapsody No. 1 for solo violin. Playing with a warm, rich sound, Ciubancan brought a thoughtful, intimate approach to the work, highlighting each of its distinct episodes. END_OF_DOCUMENT_TOKEN_TO_BE_REPLACED

END_OF_DOCUMENT_TOKEN_TO_BE_REPLACED

Franz Schmidt’s Symphony No. 4 showcased the ensemble, under guest conductor Jonathan Berman, in the standard conventions of a not-so-standard piece. But at the start of the program, the musicians were equal partners to pianist Cédric Tiberghien, whose playing could be as bold as the full orchestra or as intimate as any instrumental solo. END_OF_DOCUMENT_TOKEN_TO_BE_REPLACED