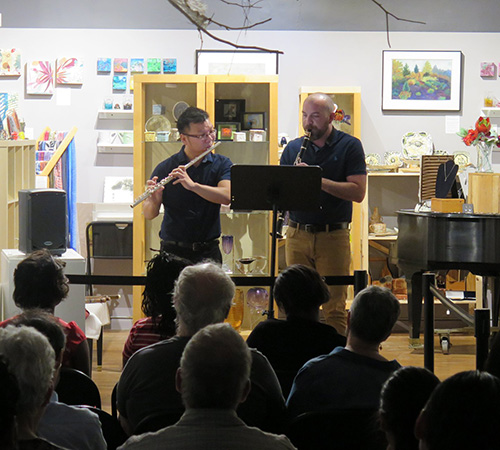 No Exit’s chamber concert on Saturday, July 28 at Heights Arts performed by clarinetist Gunnar Owen Hirthe and flutist Hong-Da Chin, engagingly juxtaposed traditional Chinese music with contemporary Western repertoire. The program also highlighted the wonders of micro-tonality. Surrounded by the Gallery’s complex, yet minimalist exhibit, Sticks and Stones, the evening was a walk through a cultural garden of sonic delights.

Bookended by Giacinto Scelsi’s Ko-Lho and David Liptak’s Duo, the works melded the sounds of the clarinet and flute to fascinating effect, treating the instruments almost like conjoined twins — never straying too far from unison.

A work in two movements, Ko-Lho is full of challenging multiphonics and other extended techniques. Hirthe and Chin brought the music to life like fighting twins who could not bear to be separated for long.

During Duo, Hirthe and Chin again found themselves weaving in and out of long unison passages during the first movement while in the second, the unisons were interspersed with angular, short phrases. The slow third movement found the pair exchanging long tones, and the finale — a swinging toccata — was embellished with sharp accented notes, and series of fast scale passages. The performers were technically and musically in command of this simple, yet complex writing. 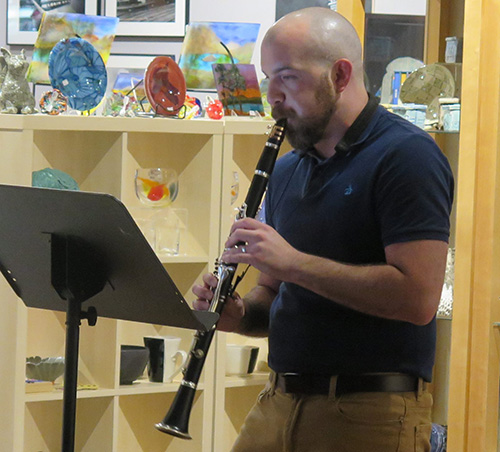 Hirthe’s solo talents were showcased during Ken Ueno’s I screamed at the sea until nodes swelled up, then my voice became the resonant noise of the sea, and Kerrith Livengood’s Show.

Ueno’s entrancing work challenges the performer with long passages of extended techniques, including throat singing, the results of which are fascinating. Hirthe brilliantly captured the bubbling sounds of the Earth as it erupted into an ocean of avant-garde sonorities. He moved seamlessly from singing to producing angry blood-curdling screams from his clarinet.

Originally written for tenor saxophone, Show is a jocular work that highlights the intersection of Eastern and Western musical traditions. The piece traverses many scalar passages from one end of the instrument to the other while taking time to suddenly hold up for the occasional melodic phrase. Again, Hirthe’s agile playing held your attention from start to finish.

Herthe and Chin again shared the spotlight during the flutist’s own One Gallon of Tears, written in memory of the 239 victims of Malaysian Airlines flight MH370, which went missing on March 8, 2014. “The plane still hasn’t been found,” Chin told the audience. “It was a dark day for Malaysians, and for the Chinese and everyone else on the plane.”

The composer said the piece is comprised of microtonal — the notes between the notes — descending figures that depict tears flowing down one’s cheek. After a slow introduction by the flute, the clarinet slips in with a unison pitch. The ensuing micro-tonality produces eerie, foreboding sounds that build to a high pitched scream from both instruments — until the unexplained tragedy ends in silence. In a word, the performance was gripping.

Interspersed were works for traditional flutes performed by Chin. Although these were “folk music” the works did not sound so far removed from the “new music” that was presented that evening. 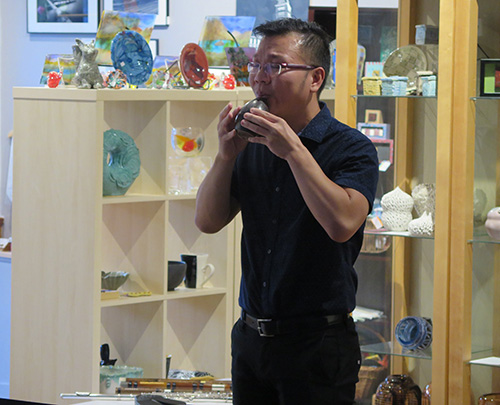 Performed on the xun, an egg-shaped clay instrument that can only play a single pentatonic scale, Three Variations at Gate Yang is a farewell tune about leaving China through the Yang gate, with no guarantee of returning. Chin brought a sense of yearning to the somber work.

For The Remaining Snow in the Cold River, the flutist turned to the xiao, a bamboo instrument that is a relative of the shakuhachi. Played vertically like a recorder, the xiao has a mouthpiece shaped like the letter U. Chin embellished the simple melody with attractive ornamentation. 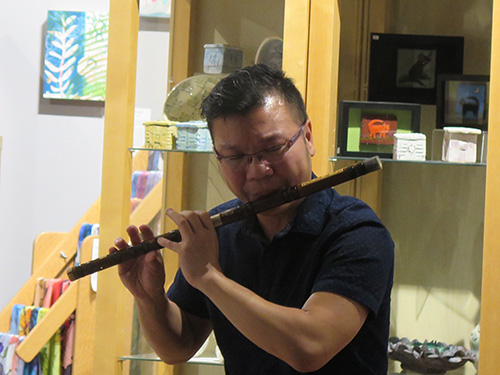 The bawu, another bamboo instrument, this one with a mouthpiece like a harmonica that produces a nasal, somewhat metallic sound, was the perfect choice for The Fisherman’s Song — a medium fast dance.

The spirited New Shepherd Song, which depicts the vastness of the prairie in inner Mongolia, is complete with the sounds of galloping and neighing horses. Playing on the dizi, a six-hole, transverse bamboo flute, Hong-Da Chin was at his most animated as he led the audience on a sonic trip through this barren landscape.

This was a program where old and new, East and West, came together, and in these performances, everyone was a winner.

END_OF_DOCUMENT_TOKEN_TO_BE_REPLACED

Rodgers & Hammerstein’s Cinderella was originally produced for television in 1957 — seven years after the animated Disney film was released — and starred Julie Andrews. According to the Rodgers & Hammerstein website, it was viewed by over 100 million people. END_OF_DOCUMENT_TOKEN_TO_BE_REPLACED

The story line has its origin in an 1855 play and an 1842 farce that Thornton Wilder mined for his 1938 play The Merchant of Yonkers. When that turned out to be a flop, in 1954 Wilder made the crucial decision to re-center the show around the character of the legendary marriage broker Dolly Gallagher Levi and renamed it The Matchmaker. END_OF_DOCUMENT_TOKEN_TO_BE_REPLACED

The Dodero Center for the Performing Arts at the Gilmore Academy in Gates Mills is one feature of an impressive campus. The auditorium is shallow, the stage is deep, and the ensemble played without a shell. Throughout the program, the sound, especially in instruments’ lower registers, tended to disappear. END_OF_DOCUMENT_TOKEN_TO_BE_REPLACED