Joyce DiDonato wants you to play with the song, and she’ll tell you why. The multiple Grammy award-winning mezzo-soprano brought a full house to Oberlin College’s Finney Chapel on Wednesday, February 27, backed by an all-star ensemble. The program featured an array of songs from her recent album Songplay, and although moments bordered on theatrical cheese, DiDonato delivered the goods with her signature panache.

The primary conceit of Songplay is reinterpretation — DiDonato and her longtime friend and pianist Craig Terry returned to what they call the “Singer’s Bible,” The 24 Italian Art Songs, and endeavored to liberate them from their pedagogical context. This was intended to recenter the artistic merit of these gorgeous pieces, considering them together as a cohesive recital rather than merely a method book. But how? DiDonato’s first selection — Giuseppe Giordani’s Caro mio ben — succinctly introduced her answer, as well as the bulk of the similar material that spanned the rest of the concert.

The piece started normally, with DiDonato singing in long phrases of vibrant depth. She admitted before she began that she was nervous to be singing in front of Oberlin Conservatory students, even going so far as to suggest that she would never have gotten into the school as an undergrad — but any alleged stage fright was imperceptible. As the song progressed, Terry began to spin out the simple counterpoint of the piano accompaniment before jaunting off into jazzier chords. Miming surprise, DiDonato powered through with a feigned haughty glance at Terry, apparently battling for control of genre. It was no use — he was off! The premise was clear: great songs would feature reinvented accompaniment, with DiDonato’s voice the powerful gale gliding over uncharted harmonic terrain.

DiDonato was effervescent, as always, handling the gilded standards with fluid ease. She committed fully, with spunk in the songs but schmaltz in the narrative interludes. She called additional collaborators to the stage one by one, introducing them with a “for my next act, I will” type gesture. The narrative arc of the shtick was a bit too deliberate, but each successive addition of musicians enhanced the project’s efficacy tremendously. 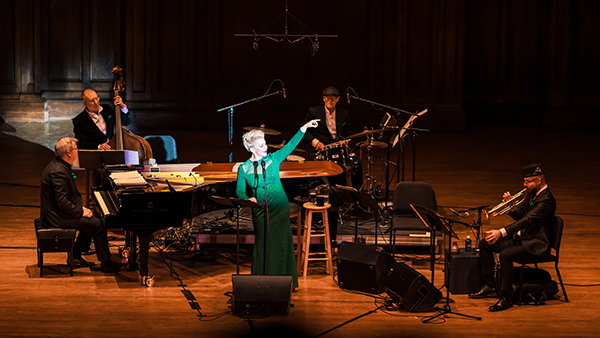 Bassist Chuck Israels joined first, lending depth with an instrument crafted in 1741, presumably on loan from the conservatory. Jimmy Madison hopped on the drumset, upping the group’s energy. When trumpeter Charlie Porter arrived, the group stabilized in a tight, full sound, as DiDonato sang a Se tu m’ami/Star vicino mashup over a samba groove. Porter’s playing was boisterous and charismatic, ripping nimbly through chordal arpeggios.

Not all of the offerings used the gimmick of recomposed accompaniment. The combo found their most effective pathos in their Great American Songbook selection, (I’m Afraid) The Masquerade is Over), and Lean Away, a heartfelt Andrew Thomas arrangement of acclaimed librettist Gene Scheer. In their native element, these pieces made sense, and offered respite from the pairings of Italian art song and jazz nightclub sounds. The ensemble simply felt more natural, effortless rather than premeditated, and this made the music more poignant. Another standout number featured Lautaro Greco on the bandoneon, rapturing all with an unnamed tango brimming with depth and invoking his Argentine roots, 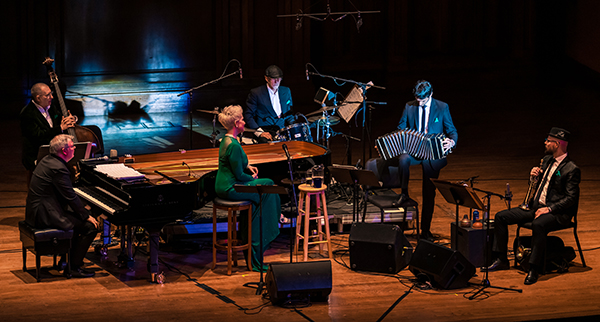 The music was undeniably well done, and in that way “gimmick” is too dismissive a descriptor. However, the overall project was a little too self-aware, and a little too precious. Yes, play with the song and revivify the classics, but perhaps with more subtlety and less verbal explication of the process. And less homogeneity, too.

Of course, these are mere quibbles, reaffirmed by the two encores DiDonato gave the eager crowd. The first, “Col piacer della mia fede” from Vivaldi’s Arsilda, regina di Ponto, was a testament to her agile finesse (although not without a few forays into modal harmonies and traded fourths), which she sang as a nod to her “day job” — her tenure as one of opera’s biggest stars.

The second was sensational. DiDonato bloomed atop Greco’s bittersweet bandoneon in La Vie en Rose, and her empathetic ensemble moved as one.

Jackson began the program with a recitation of Langston Hughes’ poem “Helen Keller” — the first of five poems by Hughes that served as interludes between each piece on the first half. END_OF_DOCUMENT_TOKEN_TO_BE_REPLACED

Pianos with pins and tape on strings, a bass drum and tam tam, crotales, Almglocken, and vibes. Microphones were hooked up all around the instruments. The feed was sent to speakers around the room. Lighting designer Nicholas Houfek hung incandescent globes over the arrangement of instruments from thin black wires stretching across the beams. END_OF_DOCUMENT_TOKEN_TO_BE_REPLACED

From the podium, Elim Chan set an ambitious tone for the evening. The rising star conductor, here in her Cleveland Orchestra debut, has a commanding style, and every twist and turn in Saturday’s performance tracked closely with her baton. END_OF_DOCUMENT_TOKEN_TO_BE_REPLACED