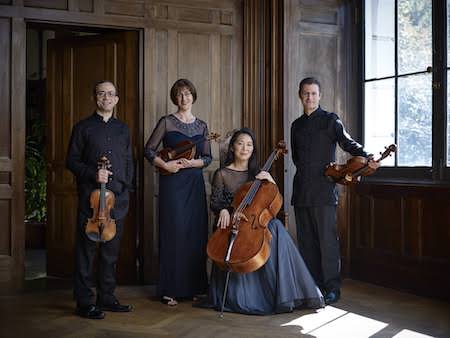 The Brentano String Quartet has an affinity for both the standard repertoire and music very old and very new. Their program on the Oberlin Artist Recital Series at Finney Chapel on Friday, March 30 at 8:00 pm covers all those bases. Beginning with arrangements of madrigals by Monteverdi and Gesualdo, they’ll jump 400 years to the music of Oberlin Conservatory composition chair Stephen Hartke, then close with Shostakovich’s Quartet No. 12 in D-flat.

“Our friendship has been the real sine qua non for continuing as a long-term quartet,” Amory wrote in an email while the Quartet was in Spain. “It is possible that we spend as much time with each other as we do with our own families, which without our love and esteem for one another would be a tough proposition. We are not a group that would thrive well on a business-based type of arrangement, where we would meet for rehearsals and concerts but otherwise have nothing to do with each other.”

Over the years a symbiosis has grown among the players. “We know for the most part what is needed to ensure each other’s equanimity — where not to tread, when to insist, when to leaven a situation with humor. And we are grateful that as we’ve grown older, found partners, and started families, a happy balance has evolved between our quartet life and our personal lives. This is another essential ingredient for ensuring the group’s longevity.” 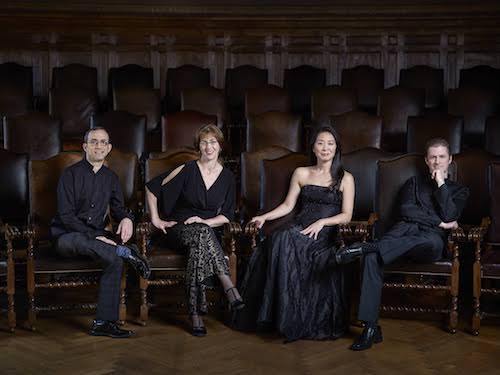 The Quartet have authored their own beautiful collection of program notes, written “in layman’s language as much as possible,” Amory said. For example, Mark Steinberg writes about hearing Monteverdi’s madrigals without their texts, drawing a parallel to the Norwegian film Reprise:

…there are some scenes where a conversation is heard in the background but one sees only gazes and glances between the characters involved. The import of the words is there even in their absence. Here, in this string quartet setting, Monteverdi’s reflections of the words remain intact and the music is suffused with emotion every bit as specific as words allow. Rhetoric present in inflection can sometimes convey emotion even more honestly than the words it carries. We would like to think that much of the tenor of the text is still present here, and that the strengths of the string quartet medium closely parallel those of a vocal ensemble. We aim to give a convincing performance with shadow puppets.

Gesualdo’s madrigals, on the other hand, “were sometimes performed instrumentally, on viols, accompanying theatrical performances of a melancholy cast,” Steinberg writes, adding that “historical tradition is on our side.”

In both cases, Amory said the Quartet studies how the text corresponds to each note. “That can inform the intensity with which we might charge certain attacks, and on the phonetic/phonemic level, how we might encourage certain syllables to cohere into words, or words into phrases. It is a defining trait of madrigal style that the music should react hypersensitively, sometimes almost note by note, to the expressive sense of the text, so this type of attention is important.”

The violist offered one disclaimer. “Of course, subjugating a performance completely to this way of thinking would result in something rather stilted and broken up, so we try to be alert to when it is wiser just to let the natural course of the music take over and speak for itself.”

The idea of madrigals continues with Stephen Hartke’s piece. He considers his string quartet The Fifth Book (2016) to be his fifth book of madrigals — two for voices, three for strings.

“When Stephen describes the music in this quartet as madrigals,” Amory said, “he is alluding especially to the sensitive and changeable nature of the music. In Gesualdo or Monteverdi, this hypersensitivity is a result of attuning the music to the text; in Stephen’s quartet the music is reacting to, or conveying, an imagined text, but so vividly that it seems possible to conjure the words of that text out of thin air.”

Amory added that Hartke’s music shares “a bright airy palette” with the Renaissance works, “capable of expressing great poignancy while remaining transparent in its textures.”

Both of Hartke’s string quartets were written for the Brentano. “We courted Stephen for several years without success — right around that time he was becoming very sought-after and had a lot on his plate,” Amory said. “But he attended a concert we gave at Aspen in 2004 or so, and he must have enjoyed it (or it coincided happily with a gap in his creative cycle), because afterwards he declared himself ready at last to write something for us. Since then we have really enjoyed knowing him, being guided by him, and hearing his erudite and striking views on many aspects of the field.”

From madrigals to “madrigals,” the program’s web already spins tight. Add to that a thread between the Hartke and another work by Shostakovich: the Oberlin composer’s “From the Fifth Book,” written for the group’s 2011-12 Fragments Project, was inspired by Shostakovich’s “Unfinished” Quartet.

“Stephen chose the title with a notion that the piece might become the genesis for a larger work,” Amory said, “and in fact it became, verbatim, the first movement of The Fifth Book.”

It seems fitting to close with the violist’s own fascinating pen-to-paper — excerpts from his program note for Shostakovich’s Twelfth Quartet, which ends the Brentano’s program. He describes it as

a work of physical extremes, demanding of its performers the most rapid brilliance as well as the most patient, long bows, the most monumental fortes and the most hushed pianissimi, the greatest intensity in some passages and a nearly lifeless resignation in others. These oppositions are not unusual in Shostakovich’s music, but there is one other which is: in this quartet the composer explored for the first time the atonal system of twelve-tone harmony, invented by Arnold Schoenberg, and opposed it to the tonal center of D-flat major, the home key of the work…

As might be expected, a composer as famous as Shostakovich, who had never used this system in his writing before, came in for plenty of interrogation when it appeared in this quartet. Was he “going over” to the other side? Had he been converted in some sense? To this he made the excellent reply: “Everything in good measure. If, let’s say, a composer sets himself the obligatory task of writing dodecaphonic music, then he artificially limits his possibilities, his ideas. The use of elements from these complex systems is fully justified if it is dictated by the idea of the composition.” It is hard to imagine a clearer mark of artistic maturity than this affirmation, that the creative idea must be served by the technique and not vice versa.

The cimbalom was the feature of the show, an instrument capable of taking on many personas. Its performer, Chester Englander, has shaped his career around the instrument, and has inspired composers to write more repertoire for it, some of which was presented on the program. END_OF_DOCUMENT_TOKEN_TO_BE_REPLACED

You wouldn’t expect that acoustic from a glance at the nave, which is wide and long, but not especially lofty. But when I guest conducted a local amateur choir and professional orchestra in Beethoven’s Mass in C there a few years back, during the first rehearsal we released the final chord of the “Gloria” and listened in astonishment for the next several seconds. The sound continued to roll down the space like the big wave that surfers dream about. END_OF_DOCUMENT_TOKEN_TO_BE_REPLACED