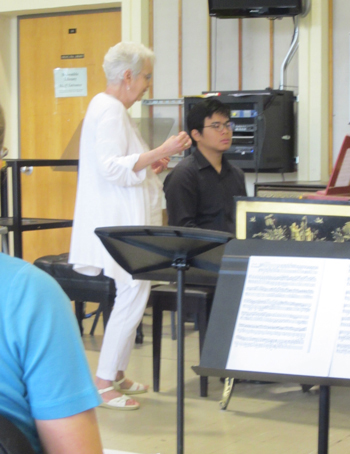 Friday morning’s harpsichord master class was the last opportunity to formally pick our mentor’s brains, and performances by the last set of students inspired Mark Edwards and Lisa Goode Crawford to deliver some very useful tips.

Performance No. 1 was a C-major prelude from the Wilhelm Friedemann Bach Notebook — a set of pieces Johann Sebastian Bach expressly selected for the tutelage of his eldest son beginning in 1720. Edwards began by asking what type of piece it was. Answer: a figuration prelude, in style brisé, which is meant to imitate the lute. In fact, Edwards said, the harpsichord is really a giant lute with keys. Advice to student: overhold notes (including octaves in the left hand), let the strings vibrate, and think of articulation in terms of wetness vs. dryness.

Performance No. 2 was a Gibbons Fantasia that the performer had already played for Crawford in a lesson — using a highly suspect modern edition:

So for Friday’s class, off he went to those famous sliding stacks to look for a better one. That more scholarly score was festooned not with slurs and dynamic markings but with an abundance of ornaments, some meant to be played simultaneously:

Crawford noted that there are no tables from this period that explain how to play those confusing decorations, which is a nice thing, because “no one can prove you wrong.” But in general, slides into notes suggested in the score should be “melodic rather than sparkly,” and notes and ornaments should be combined into a unified “sound picture.” Crawford also pointed out that English virginal music was frequently played on chamber organs, which can alter the player’s approach.

The last player delivered vibrant readings of Jacques Duphly’s La Victoire and La Felix. Crawford gave the performer, a pianist who had recently taken up the harpsichord, some tips about adjusting his technique accordingly. She also advised him to “let the piece breathe and bloom” — he always seemed to be thinking ahead to his next move. 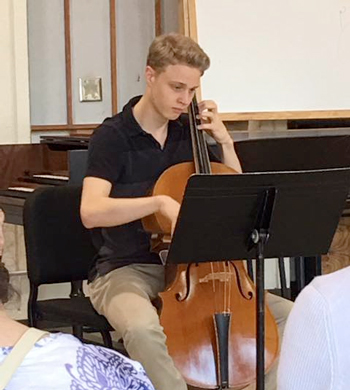 I intended to pull cellist Luka Stefanović aside today for an interview, but his schedule was full. We finally did that later by phone, but we’ll hear from him in today’s dispatch anyway. After speaking to Peter Lim yesterday, I was interested in hearing from another high-school age participant about his experiences at BPI.

Stefanović is 17 and attends the Baltimore School for the Arts. His father is associate principal second violin in the Baltimore Symphony, having left his native Serbia to study at the Cleveland Institute of Music where he met his future wife, a cellist.

Luka’s older and younger siblings play viola and cello, and growing up in such a string-oriented family, I suggested it was inevitable that he’d take up a bow early in his life. “Actually, at the age of four, I wanted to play the trombone,” he said, “but my parents told me that my lungs weren’t developed enough to play a wind instrument. They said, ‘Why don’t you play cello? It’s close enough, and you can switch later.’ As you can see, I never did.”

Not every young cellist is drawn to early music. What led Luka in that direction? “I really enjoyed the sound of historical instruments, and my curiosity for what’s outside the mainstream fueled my interest. There’s almost nothing in the way of early music for high school-age students in Baltimore, or probably in any city.”

BPI represented Luka’s first complete immersion in the subject. “I had been replicating historical playing on my modern cello with a baroque bow, but it’s really not the same,” he said. “And the environment of BPI is vastly different from anything I could have here at home.”

Stefanović borrowed a Baroque cello from Oberlin for the Institute, but said he’s now inspired to begin looking for an instrument of his own. He also joined the beginning viola da gamba class. “It was very confusing at first. The gamba has two more strings, and they’re all tuned differently from the cello. It’s really a mental workout to wrap your mind around the relationship of the strings to each other.”

I asked Luka if he had any sense of why the gamba seems to inspire such ardent devotion among those who take up the instrument. “People always say the cello is closest to the human voice, but I would say that the gamba comes even closer,” he said. “If you’re going to spend your life playing it, you have to be completely devoted. It’s very difficult, and the repertoire is so vastly different from the cello.”

While his teacher, Daniel Levitov (himself an Oberlin graduate and BPI alumnus) isn’t a Baroque musician himself, Luka said he’s always fostered his interest in the subject. What were his expectations going into BPI? “I went in expecting a less-welcoming environment than it ended up being, which was fantastic,” he said. “I also expected to have a lot more time to practice. They keep you busy, which is good. I learned so much and the faculty is very knowledgeable. Having a master class with Ken Slowik every day was one of the high points. His anecdotes often go off-topic, but they’re still informative and interesting.” 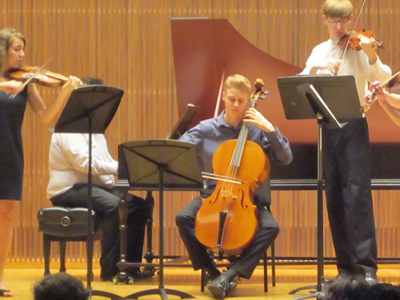 And what about the wide range of ages and abilities among the participants? “The mix of ages and abilities might be offputting to some,” he said, “but it’s a very similar environment to the Apple Hill Chamber Music Festival, where you might find a twelve-year-old violinist being accompanied by a seventy-year-old on piano. I feel very comfortable in that kind of environment, and it takes some of the pressure away — it allows you to concentrate on your personal goals without feeling you always have to be competing or proving yourself.”

Luka Stefanović plans to attend a conservatory or university pursuing degrees in modern cello, adding Baroque cello wherever he can. “If it ends up that Baroque cello is taking more and more of my life, I can switch over. But I’d like to keep the two in equal balance.”

This afternoon, John Thiessen coached the final rehearsal of my chamber ensemble and we discussed the dress rehearsal plan for Saturday afternoon’s participant recital in Kulas Hall. Because his airline had switched him to an earlier flight on Saturday, this was the last opportunity to adjust details before a runthrough in the hall.

The second Friday evening concert, the bigger of the two, combined BPI faculty and advanced students into a 38-piece Baroque orchestra. “La Belle Danse,” curated by Skip Sempé, who conducted from the harpsichord, gathered dance movements from operas by Jean-Baptiste Lully, Marin Marais, and Georg Muffat into three suites.

Too bad there weren’t dancers available to flesh out the evocative music, but thanks to the vivid and elegant playing of the large faculty-student ensemble, you could close your eyes imagine Fauns and Driads (Alcyone), Magicians (La Pastorale Comique), and the great god Pan and his company — accompanied by violins and flutes enroute to the King’s table (Armide) — processing across the Warner Concert Hall stage. The orchestra played with assured ensemble, Sempé shaping phrases only with an occasional gesture from the keyboard. 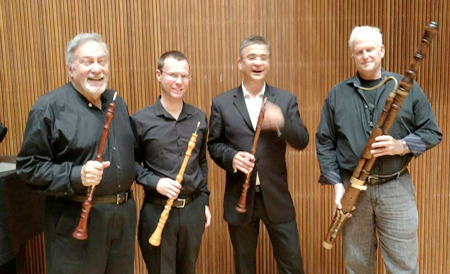 After intermission, French elegance gave way to German precision and earthy humor as the orchestra offered BPI featured composer Georg Philipp Telemann’s  ‘Darmstadt’ Overture à 7 for three oboes, strings, and basso continuo. One of seven suites the composer wrote for the court of Ernst Ludwig VII, who had lured many musicians from Paris to populate his orchestra under the astute leadership of Johann Christoph Graupner, the work starred faculty oboist Gonzalo Ruiz and student oboists Peter Maddigan and Joel Evans.

Particularly striking were the three inner movements “Harlequinade,” “Espagniol,” and “Sommeille,” the latter a theatrical slumber scene that ends with a naked low C from the violone. Speaking of the violone, it was satisfying to hear 16’ pitch in the continuo department during the Telemann. What did French Baroque composers have against doubling bass lines at the octave below?

END_OF_DOCUMENT_TOKEN_TO_BE_REPLACED

Rodgers & Hammerstein’s Cinderella was originally produced for television in 1957 — seven years after the animated Disney film was released — and starred Julie Andrews. According to the Rodgers & Hammerstein website, it was viewed by over 100 million people. END_OF_DOCUMENT_TOKEN_TO_BE_REPLACED

The story line has its origin in an 1855 play and an 1842 farce that Thornton Wilder mined for his 1938 play The Merchant of Yonkers. When that turned out to be a flop, in 1954 Wilder made the crucial decision to re-center the show around the character of the legendary marriage broker Dolly Gallagher Levi and renamed it The Matchmaker. END_OF_DOCUMENT_TOKEN_TO_BE_REPLACED

The Dodero Center for the Performing Arts at the Gilmore Academy in Gates Mills is one feature of an impressive campus. The auditorium is shallow, the stage is deep, and the ensemble played without a shell. Throughout the program, the sound, especially in instruments’ lower registers, tended to disappear. END_OF_DOCUMENT_TOKEN_TO_BE_REPLACED