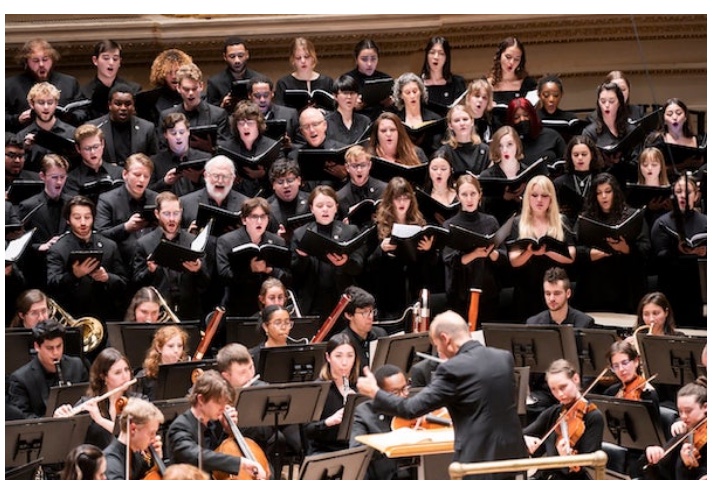 Many musicians can only dream of performing at Carnegie Hall. But next week students at the Oberlin Conservatory will have had the opportunity to perform at the famed venue not once, but twice in as many months.

On December 2, the Oberlin Orchestra and choral ensembles performed before the 77th General Assembly of the United Nations at a Carnegie Hall gala (left, photo by Chris Lee). The concert marked the beginning of a new partnership between Oberlin and the United Nations aimed at improving access to education and musical training for students all over the world.

On January 20, the Oberlin Orchestra, Oberlin College Choir, Oberlin Gospel Choir, and Musical Union, will return to Stern Auditorium to perform R. Nathaniel Dett’s 1932 oratorio, The Ordering of Moses. The 8:00 pm concert will also include Brahms’ Tragic Overture and Iván Enrique Rodríguez’s 2018 musical essay A Metaphor for Power. Tickets are available at carnegiehall.org.

If you can’t attend the New York concert, there will be a free send-off performance on Tuesday, January 17 at 7:30 pm in Finney Chapel on the Oberlin campus. Click here for the livestream.

“Opportunities for performance and performative expression are central to the professional training of all musicians, and we are very proud to offer our students this opportunity to share their artistry in two of the world’s most celebrated venues for their craft,” Oberlin Conservatory dean William Quillen said in an article for the conservatory website. “Central to this remarkable experience is the opportunity we have to celebrate one of Oberlin’s own: R. Nathaniel Dett, a visionary musician and educator and one of Oberlin Conservatory’s most distinguished alumni.” 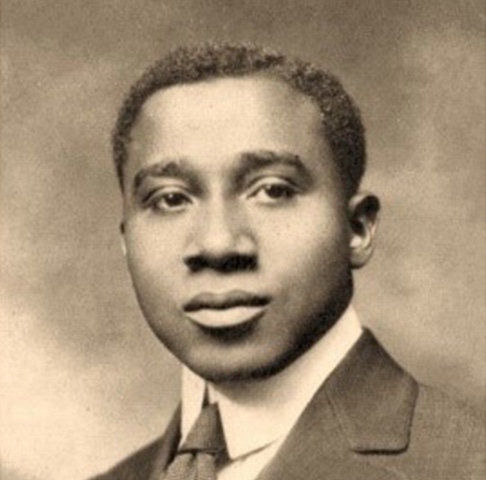 Nathaniel Dett was born in what is now Niagara Falls, Canada, in 1882. He graduated from the Oberlin Conservatory in 1908 — the first Black alumnus to graduate with a double major (piano and composition) and Phi Beta Kappa honors. He is also the first Oberlin College graduate to be awarded an Honorary Doctorate (1926).  After studying at Columbia, Harvard, the University of Pennsylvania, the American Conservatory, and with Nadia Boulanger in France (1929), He graduated with a MMus degree from the Eastman School of Music in 1932.

As a composer he often found his inspiration in African American folk music. In 1918, Dett wrote of his compositional goals:

We have this wonderful store of folk music—the melodies of an enslaved people … But this store will be of no value unless we utilize it, unless we treat it in such manner that it can be presented in choral form, in lyric and operatic works, in concertos and suites and salon music — unless our musical architects take the rough timber of Negro themes and fashion from it music which will prove that we, too, have national feelings and characteristics, as have the European peoples whose forms we have zealously followed for so long.

The Ordering of Moses was composed in 1932 as part of Dett’s graduate study at Eastman. He revised and expanded the work in 1937, which received its premiere on May 7 that same year at the Cincinnati May Festival, when Eugene Goosens conducted the Cincinnati Symphony and a chorus of 350.

Dett recounts the biblical story of the Exodus and the journey from persecution to freedom, skillfully blending his classical training with Black folk songs and spirituals — something he learned to do at Oberlin and continued throughout his career.

After its premiere, the work lay dormant until 1956, when it was revived and recorded at that year’s May Festival, featuring soprano Leontyne Price and baritone William Warfield. The performance was broadcast live across the US on NBC radio, but the network stopped the broadcast three-quarters of the way through, claiming a scheduling conflict. In an article for The Guardian, tenor Roderick Dickson reported that the announcer explained,

“We are sorry indeed, ladies and gentlemen, but due to previous commitments, we are unable to remain for the closing moments of this excellent performance.’ It has been suggested that these “previous commitments” were in fact a concession to objections voiced by callers to the network. The May Festival’s performance of The Ordering of Moses might well have been the first network broadcast of a major work by a Black composer.

Oberlin’s performances on January 17 and 20 will be conducted by Raphael Jiménez (left, photo by Tanya Rosen-Jones). Soloists include Oberlin alumni soprano Chabrelle Williams ’11 and tenor Limmie Pulliam ’98, and guests mezzo-soprano Ronnita Miller and baritone Eric Greene. The choral forces have been prepared by conservatory faculty Gregory Ristow and Ben Johns.

In conjunction with the concert, on Thursday January 19 at 5:30 pm in Merkin Hall at Kaufman Music Center, Courtney-Savali Andrews (below, photo by Erin Koo), Oberlin’s assistant professor of African American and African diasporic musics, will moderate a panel discussion titled: Cultural Context in Dett’s “The Ordering of Moses.” This discussion brings together prominent scholars and performers from the fields of African American music, choral music, ethnomusicology, music theory, and religion to explore Dett’s music, life, and ideas. Click here to access the stream and for more information.

“It is fantastic to see a watershed moment in the programming of Dett’s repertoire across the nation and overseas,” Andrews said in an article for the conservatory website. “Eighty years after his death, it seems as if he is in the press now almost as much as he was when he was touring solo and with his ensembles throughout his 45-year career between Canada, America, and Europe. Audiences today would serve his legacy well to take a closer look at the layered aspirations of this great American composer, thought leader, and culture bearer.”

Oberlin’s Big Apple runout will also include performances by the Oberlin Sonny Rollins Jazz Ensemble at Dizzy’s Club Coca-Cola on Thursday, January 19. The eight-piece honors combo will play two sets at the intimate venue that is part of the Jazz at Lincoln Center complex. 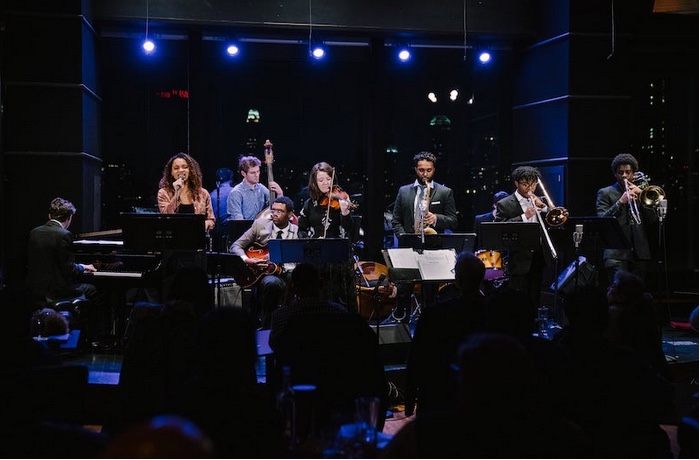 While in the City, members of the Ensemble will take part in performance-visits for area schoolchildren and music programs in New York and New Jersey. (photo by Fadi Kheir).

You can hear the Sonny Rollins Jazz Ensemble at the Oberlin ’Sco’ located on the lower level of Wilder Hall on Sunday, January 15 at 7:30 pm. Click here for the livestream.

END_OF_DOCUMENT_TOKEN_TO_BE_REPLACED

The strings-only work by Berg has made relatively frequent appearances on the Orchestra’s programs. In 2021, the musicians recorded it for the In Focus series, and it appeared again on last year’s European tour. Friday’s rendition maintained the group’s characteristic light and effortless playing, each section blending as much as possible to echo the work’s original form as a string quartet. At fifteen minutes total, the piece is quite short, but the dense encoded musical meanings require some extra-attentive listening. Splitting up the three movements ensured that each one could be appreciated on its own. END_OF_DOCUMENT_TOKEN_TO_BE_REPLACED