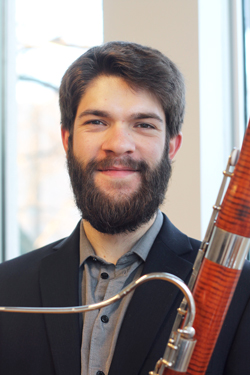 When thinking of music by Russian composer Sofia Gubaidulina, there are two works that immediately come to mind: the Chaconne (1962) for solo piano and the violin concerto, Offertorium (1980). This weekend, area audiences will have the opportunity to hear one of the composer’s lesser-known works.

On Friday, March 6 at 8:00 pm in the Oberlin Conservatory’s Warner Concert Hall, and on Saturday, March 7 at 2:00 pm in Gartner Auditorium at the Cleveland Museum of Art, Timothy Weiss will lead the Oberlin Contemporary Music Ensemble in Gubaidulina’s haunting Concerto for Bassoon and Low Strings featuring Ben Roidl-Ward. The concerts will also include the world premiere of Aaron Helgeson’s Snow Requiem for solo violin (David Bowlin), solo soprano (Alice Teyssier), 16-voice choir, strings, percussion and harp, and Jonathan Harvey’s Wheel of Emptiness.

A native of Tacoma, Washington and an Oberlin Conservatory senior, Ben Roidl-Ward was destined to perform Gubaidulina’s concerto. “There’s a CD by Russian bassoonist Valery Popov that I came across in high school, and that was my first exposure to her music,” Roidl-Ward said during a Skype conversation. “She has three works for bassoon: the Concerto (1975), which is the largest, the Duo sonata for two bassoons (1977), and the Quasi hoquetus for viola, bassoon, and piano (1984). Around the same time I also found a score of the Duo. I played through it, and it was way over my head at the time, but I still remember being fascinated by figuring out how to do some of the things the piece asks for. But I’ve always gone back to that CD because all three works are incredible. The way that she uses the entire range of the bassoon and its most attractive sonorities, you can tell that she spent a lot of time getting to know the instrument.”

The chance for Roidl-Ward to perform the concerto came about last spring when Tim Weiss asked him if he would be interested in playing it with CME. “Of course, I said yes right away. It’s been a dream of mine to play it for a long time, and I’m so excited to have this opportunity, especially to play it with CME.”

Roidl-Ward said that performing the work is an “athletic feat. There passages in the stratosphere, and in the next one you’re way down in the basement. So it’s not just about technique, it’s having to play in that wide of range for 30 minutes, while maintaining a beautiful sound and good intonation. Then, of course, you need to make a reed that can do all of that. But because I love the piece so much it’s been a fun challenge.”

Gubaidulina also uses the full range of the low strings. “One of the exciting things about the piece is that you have this low, deep and rumbling ensemble (four cellos and three basses), but they also have to go into the highest ranges of their instruments. Sometimes half the ensemble is in the lowest range and the other in the highest — she really stretches everything out as far as she possibly can.”

The Concerto presents many ensemble issues as well, one of which is the use of irrational rhythms: the soloist is playing an unmeasured passage, but is required to line up with the ensemble at certain points. There are also sections where the solo line is strictly measured, while the ensemble is not. “Those places give members of the ensemble the chance to emerge from within, and play as a soloist. It also makes those passages a little different every time you play them. But that’s what makes the piece so fun — being able to play off of each other like that in the moment. What’s great about CME is that you have the chance, and the time, to learn how to do these things. I think everyone is having fun exploring this work.”

The use of extended techniques presents another array of challenges, one of which is flutter-tonguing. “I can do the rolled ‘r’ and I’m happy I can, because I think using the tongue makes the sound so much more percussive. I think this piece really needs it. And I love the way she uses it in the low register. She manages to get one more sound quality out of the bassoon.”

Playing the highest notes possible on the bassoon is a requirement — including a few high E’s. There’s also a high G, which requires the player to put their teeth on the reed in order to produce it. “Yes, high G to the low B-flat. This piece has it all.”

When it comes to the works numerous multiphonics, Roidl-Ward has had to make changes to the fingerings indicated in the score. “But that’s not unusual because each instrument is different, and the reed styles are different as well. And by contemporary music standards, this concerto is a fairly old one. That’s not to say it isn’t contemporary, but bassoonists have been kicking around the techniques in it for 40 years now. I’ve encountered many of them in other pieces I’ve played in CME, as well as in the solo repertoire. However, the glissando is always so problematic, and I find that to be part of its attractiveness — making a smooth slide between notes with the combination of the air, lips and fingers. There are some in this piece that are in the highest register, which I have had to get pretty creative with, but I think the effect is really captivating.”

The piece is often thought of as a narrative work in which the bassoon represents the hero. Did that idea come from Gubaidulina, or is it something that has been imposed on the piece by players? “That’s such an interesting question. I think the idea that the bassoonist represents the hero is very cool. And there are many places in the piece where it is quite clear that there is a battle going on between the bassoon and the ensemble. There are musical conversations in the ensemble that really do sound like a crowd of people arguing amongst themselves, as well as with the bassoon. So for me, it is a fun way to think about the piece, but I don’t know if I would go much beyond that. I do know that to pull off those sections, you really need seven virtuosic low string players, and we have them. I’m so lucky to be able to play with such great musicians. It’s been a lot of fun.”

Franz Schmidt’s Symphony No. 4 showcased the ensemble, under guest conductor Jonathan Berman, in the standard conventions of a not-so-standard piece. But at the start of the program, the musicians were equal partners to pianist Cédric Tiberghien, whose playing could be as bold as the full orchestra or as intimate as any instrumental solo. END_OF_DOCUMENT_TOKEN_TO_BE_REPLACED

END_OF_DOCUMENT_TOKEN_TO_BE_REPLACED

Jackson began the program with a recitation of Langston Hughes’ poem “Helen Keller” — the first of five poems by Hughes that served as interludes between each piece on the first half. END_OF_DOCUMENT_TOKEN_TO_BE_REPLACED

Pianos with pins and tape on strings, a bass drum and tam tam, crotales, Almglocken, and vibes. Microphones were hooked up all around the instruments. The feed was sent to speakers around the room. Lighting designer Nicholas Houfek hung incandescent globes over the arrangement of instruments from thin black wires stretching across the beams. END_OF_DOCUMENT_TOKEN_TO_BE_REPLACED

From the podium, Elim Chan set an ambitious tone for the evening. The rising star conductor, here in her Cleveland Orchestra debut, has a commanding style, and every twist and turn in Saturday’s performance tracked closely with her baton. END_OF_DOCUMENT_TOKEN_TO_BE_REPLACED