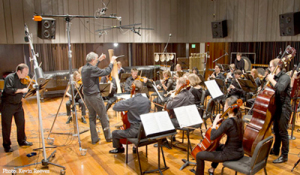 Having birthed such first-rate new music ensembles as eighth blackbird and ICE (International Contemporary Ensemble), the Oberlin Contemporary Music Ensemble has been long overdue for it own regular presence in Cleveland.

That finally came to pass on Saturday afternoon, September 27, when Timothy Weiss and the Oberlin CME gave the first of five concerts in a new subset of the Cleveland Museum of Arts Performing Arts Series. Saturday’s performance in Gartner Auditorium painted the ensemble’s reputation with a new layer of glory.

The fourteen student musicians were joined by Oberlin faculty members Richard Hawkins, clarinet, and George Sakakeeny, bassoon, for just over an hour’s worth of music by living composers. So alive, in fact, that two of them, Chen Yi and Zhou Long, were present to join Weiss in a twenty-minute pre-concert chat. Yi and Long happen to a married couple, as are Bernard Rands and Augusta Read Thomas, the other two composers on Saturday’s program, leading Weiss to quip that it might have been dubbed “The Divorce Court Concert.”

Though Hawkins was singled out typographically and had a large range of material to cover, he integrated his part skillfully into the fine ensemble. Among the highlights: Popowycz played a long, high harmonic with an unwavering bow and Etsell teased subtle pings from the piano by plucking its strings. Highly rhythmic dances, a furioso section and tricky unison passages united all four players into a fascinating musical web. Though unconducted, the performance was so unified and tight that one slightly spattered pizzicato really stood out.

The whimsical, three-movement work moves from dance-y syncopations to static textures relieved by piano, harp and bassoon (representing the floating objects in Kandinsky’s sky) to a riot of repeated notes framed by wide-ranging leaps from the bassoon. Sakakeeny’s mellow, colorful tone carried well across the footlights, and Weiss and his players brought Thomas’s score to life with spirited accuracy.

Cerebral and partially alleatoric, Bernard Rands’s Scherzi (1974) was the oldest work on the program, and might be one of the most serious sets of “jokes” you’ll ever hear. The first four of its short, untitled movements each featured one instrument in the mixed quartet: violin (Henry Allison), clarinet (Ryan Toher), cello (Joshua Morris) and piano (Shihui Yin), in that order. The unconducted musicians each took their turn with flair and presence, finally joining together on an equal basis in the last movement.

Too frequently, new music gets performed without enough preparation. These meticulously rehearsed performances were confident and settled, yet sounded completely fresh. Any composer would be thrilled to have their music treated with the level of care that Timothy Weiss and the CME lavished on the four pieces we heard on Saturday.

Also too frequently, the varying instrumentation of new pieces makes for endless and chaotic stage shifts, but this concert was planned and executed with impressive efficiency.

Fans of new music — as well as the merely curious — should take note of the next four Oberlin CME concerts on Saturdays at 2pm: November 1, December 13 (with special guest and Oberlin alumna Jennifer Koh), March 7 and April 11 (featuring pianist Thomas Rosenkranz). At $5 a ticket, it’s a steal.

END_OF_DOCUMENT_TOKEN_TO_BE_REPLACED

Supported by engagingly, yet simple staging by Cara Consilvio, a well-prepared cast of singers told the archetypal story of Cinderella with charm and flair. Framing the production was  a sparse but colorful set and wonderful lighting by Dave Brooks. END_OF_DOCUMENT_TOKEN_TO_BE_REPLACED