“Too frequently, new music gets performed without enough preparation. These meticulously rehearsed performances were confident and settled, yet sounded completely fresh. Any composer would be thrilled to have their music treated with the level of care that Timothy Weiss and the CME lavished on the four pieces we heard on Saturday.”

That’s what ClevelandClassical.com wrote about the first of five performances by the Oberlin Contemporary Music Ensemble at the Cleveland Museum of Art during the 2014-2015 season. After a year’s absence from the Museum’s Performing Arts Series, Weiss and his young players will return to Gartner Auditorium on Saturday, November 5 at 2:00 pm for the first of four weekend concerts this season.

CME’s relationship with CMA goes back even farther than the 2014-2015 season. “It started back in the late ‘90s with Aki, the fall new music festival that Paul Cox and Karel Paukert co-directed at the Museum,” Weiss said in a conversation in his office at the Oberlin Conservatory. “We played several concerts on that series. One of the most memorable was a large multimedia show in May of 2003 that we spent all morning tech-rehearsing, only to have the police evacuate the Museum because of a shooter down the street at the Peter B. Lewis building. That performance was cancelled.”

Weiss welcomes the opportunity to repeat four of the Ensemble’s Oberlin concerts a few days later in Cleveland. “Touring groups rehearse a little and play a program several times. I rehearse a lot and usually only get to play a program once,” Weiss said. 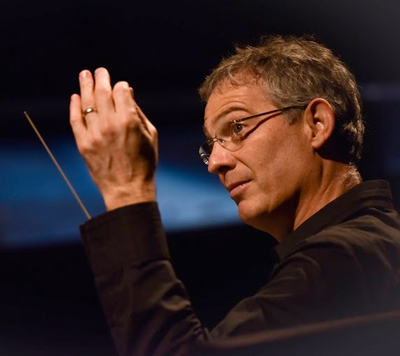 The November 5 performance will feature guest saxophonist Noah Getz in the premiere of a new work by Grammy-winning Oberlin composition professor Stephen Hartke. Willow Run for saxophone and nine players takes its name both from a stream near Detroit and a WWII bomber factory designed by Albert Kahn. Hartke writes, “On the eve of its demolition in late 2013, his granddaughter, the photographer Ernestine Ruben, visited the building not only to document it in hundreds of pictures, but also to take the raw material of these images and transform them into a narrative of birth, death, and rebirth.” The score will eventually be conjoined to a documentary film.

The afternoon will begin with Oberlin faculty composer Elizabeth Ogonek’s 2016 work, Lightenings, scored for clarinet, violin, piano, and percussion. Ogonek notes that the piece was first inspired by a dozen poems Seamus Heaney published under the same name that explore “the relationship between ordinary, everyday life and transcendence.” The composer adds that Squarings, a set of line drawings by Sol Lewitt commenting on Heaney’s poetry, and the ancient Christian hymn Phos hilaron, provided additional material on which she based her musical response.

Saturday’s program will conclude with Scottish composer James Macmillan’s …as others see us…, a relatively ancient work from 1990 based on canvasses in the National Portrait Gallery in London, where the work was first performed. Macmillan’s own version of “Pictures at an Exhibition” includes portraits of Henry VIII, the poet John Wilmot, the war hero John Churchill, the poets John Byron and T.S. Eliot, and the Nobel Prizewinning biochemist Dorothy Hodgkin.

“I was attempting an objective character analysis of each one, from my own particular perspective,” Macmillan wrote. “In order to maintain this distance throughout, I use an old Scottish dance tune which is transformed from one piece to the next to capture the character and the historical context of each portrait.” That tune takes on dramatically different forms as the exhibition continues, including a combination of High Anglican Church music and American jazz to go with a cubist painting of T.S. Eliot (he was a jazz devoté — who knew?)

In designing his programs, Weiss spends a great deal of time researching what’s going on in the contemporary music world. “I listen to something new every day, and I regularly visit about 80 websites of contemporary groups and composers. Of course, I have my favorite styles, but I’m careful to play that down when I’m choosing repertoire. There’s always a pedagogical side to it.”

Weiss’s student performers bring formidable levels of technique and musicianship to their task. It’s no coincidence that both eighth blackbird and the International Contemporary Ensemble (ICE) trace their origins to the training they received in Weiss’s groups at Oberlin. Even so, Weiss is amused — and even pleased — that 8bb and ICE have pursued individual paths in choosing their own repertoire. “They have entirely different approaches.”

The format for CME concerts — just about an hour in length, with no intermission — should be an attractive draw for Clevelanders. “It’s a wonderful way to spend an hour on a Saturday,” Weiss said. “You can visit the museum, have lunch with friends, and enjoy the opportunity of hearing new music for the first time.”

Another attractive feature is the careful choreography Weiss designs for his performances. As we wrote in that earlier review, “Too frequently, the varying instrumentation of new pieces makes for endless and chaotic stage shifts, but this concert was planned and executed with impressive efficiency.”

Forthcoming CME programs at CMA will take place at 2:00 pm on Sundays — December 4, February 26, and April 9.

END_OF_DOCUMENT_TOKEN_TO_BE_REPLACED

Today’s touring string quartets hew to so uniformly high a standard that it’s often little individual touches that make ensembles stand out. The Polish musicians who make up the Apollon Musagète Quartet showed up at Plymouth Church in Shaker Heights for their debut on the Cleveland Chamber Music Society series on February 4 in matching plaid suits and black shirts. And jettisoning their jackets, they played standing (except for the cellist). END_OF_DOCUMENT_TOKEN_TO_BE_REPLACED