The portents weren’t good for the week of March 8: first the disorienting switch to Daylight time was to click in on Sunday, then a full moon would rise on Tuesday, then the 13th of the month was scheduled to fall on Friday. Midweek, the spread of COVID-19 added a spiraling series of postponements, cancellations, and shut-downs to an already unlucky period. Like other educational institutions, Oberlin College and Conservatory found themselves making decisions about how to proceed, only to change plans several times.

Finally, because all students were suddenly required to leave campus a week before spring break, the Saturday and Sunday performances of Oberlin Opera Theater’s production of Mozart’s Così fan tutte were cancelled. Luckily, the performance on Friday the 13th did take place in front of an audience restricted to 50 people — the maximum number permitted to gather at the time. It was also live-streamed, which allowed me to watch it remotely. 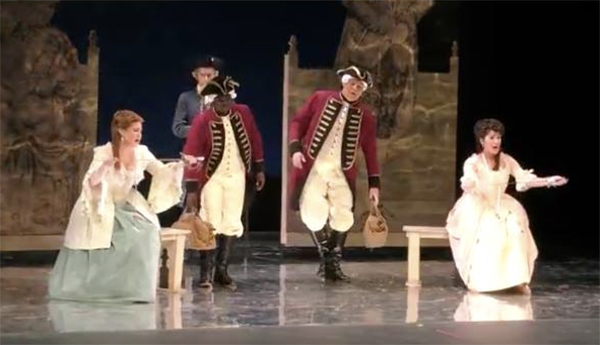 Making virtue out of necessity, Paul Eachus and Andrew Tripp, conservatory lecturers in recording arts and production, sprang into action to create a streaming setup in Hall Auditorium. Vocal ensembles director Gregory Ristow was pressed into service to read score during the show, and the feed was formatted to allow the projected English supertitles to appear as subtitles during the webcast.

The technology for webcasting has improved to the point where video and audio can arrive on one’s laptop nearly simultaneously, and at very high quality. And when the production values of a feed promise to match those of a live show, watching the webcast of a performance like Oberlin Opera’s Così can be a very satisfying experience. 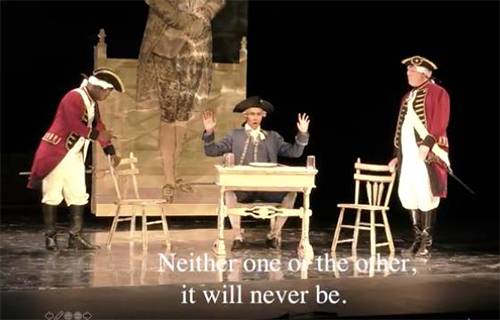 It was clear from the opening bars of the Overture, delivered with spirit and precision from the pit by Christopher Larkin and the Oberlin Orchestra, that the audio quality of the broadcast would approach the best of professionally streamed opera performances. That impression was confirmed when Ferrando (Gabriel Stefanides) and Guglielmo (Anthony Anderson) cooked up their loony charade to test the constancy of their lovers, and when Fiordiligi (Alexis Reed) and Dorabella (Gabriela Linares) launched the first of their several mellifluous duets.

Balances between the pit and stage were excellent except for a brief stretch in the second act when the orchestra miking came to the fore. Musically, the coordination of singers and instrumentalists was laser-sharp, especially in passages where Mozart requires singers and orchestra to join in complicated melismas. Christopher Larkin moved the show along briskly, setting some peppy tempos that were handily executed by cast and orchestra. Camera work was smooth and subtitles linked up neatly with the stage action.

Mozart’s maids are a special category unto themselves, and Tori Adams had great fun with Despina, especially when her character impersonated the notary. Thomas Litchev made a characterful Don Alfonso. The 11-member chorus gave a distinct lift to the crowd scenes. 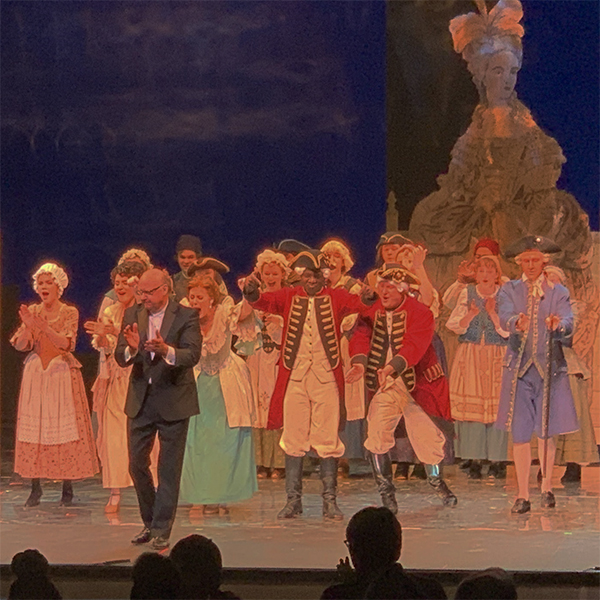 Jonathon Field’s production attractively hewed to 18th-century models, but in typical fashion, he tucked in an Easter egg or two — the chicken dance at the wedding produced a chuckle from the attenuated audience.

Oberlin’s first attempt at streaming opera was such a hit that the Conservatory should consider making this method of distribution a regular feature of its productions. Bravos all around to the cast and production team for turning a problem into an opportunity.

END_OF_DOCUMENT_TOKEN_TO_BE_REPLACED

The strings-only work by Berg has made relatively frequent appearances on the Orchestra’s programs. In 2021, the musicians recorded it for the In Focus series, and it appeared again on last year’s European tour. Friday’s rendition maintained the group’s characteristic light and effortless playing, each section blending as much as possible to echo the work’s original form as a string quartet. At fifteen minutes total, the piece is quite short, but the dense encoded musical meanings require some extra-attentive listening. Splitting up the three movements ensured that each one could be appreciated on its own. END_OF_DOCUMENT_TOKEN_TO_BE_REPLACED