To say that the music of Bernard Rands is tinged with Ravel and Debussy doesn’t tell the whole story. In reality, his music extends beyond that into a post-modern, impressionistic world. On the recently-released CD, Rands at Oberlin, the composer’s engaging musical voice is brought to life in stellar performances by Robert Walters of the Concerto for English Horn and Orchestra (2015) and by tenor Magnus Staveland of the Pulitzer prize-winning Canti del Sole (1983). END_OF_DOCUMENT_TOKEN_TO_BE_REPLACED 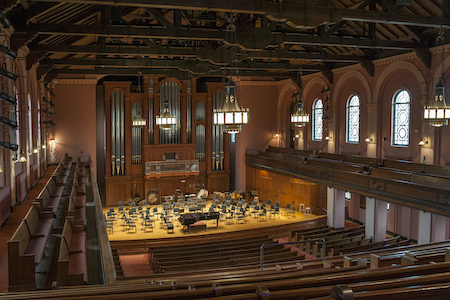 It’s uncomfortable to be inside a small space. What about being in a large space that’s often full of happy people, except it’s the middle of a pandemic, and you’re there alone?

“It was kind of spooky,” Andrew Tripp said during a recent conversation. Tripp is co-director of the Recording Arts and Production program at Oberlin Conservatory, as well as the associate director of Audio Services.

In early April, he made his way from one performance venue to the next on the mostly vacant campus. Armed with a two-way speaker, omnidirectional microphones, and a portable recorder, his goal was to “sonically document” each space, which involved the playing and recording of both music and a 30-second frequency sweep.

It was an idea Tripp had been cultivating for a few years, but one that was now more relevant than ever: with students unable to visit Oberlin’s halls, the halls could come to the students.

END_OF_DOCUMENT_TOKEN_TO_BE_REPLACED

The portents weren’t good for the week of March 8: first the disorienting switch to Daylight time was to click in on Sunday, then a full moon would rise on Tuesday, then the 13th of the month was scheduled to fall on Friday. Midweek, the spread of COVID-19 added a spiraling series of postponements, cancellations, and shut-downs to an already unlucky period. Like other educational institutions, Oberlin College and Conservatory found themselves making decisions about how to proceed, only to change plans several times. END_OF_DOCUMENT_TOKEN_TO_BE_REPLACED 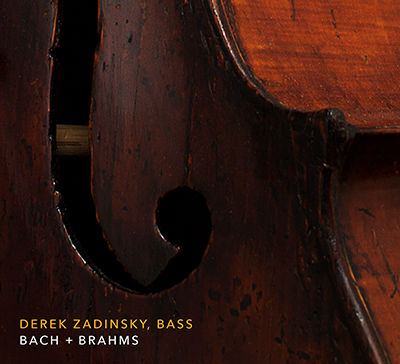 Over the years I have been fortunate to hear a number of impressive double bass recitals. But when I started listening to Derek Zadinsky’s debut solo recording, Bach + Brahms, I quickly mouthed the phrase ‘OMG, this is amazing!’

END_OF_DOCUMENT_TOKEN_TO_BE_REPLACED

Joining a long list of arrangers, Parker Ramsay has now transcribed the Variations for the modern pedal harp, an instrument for which he holds a master’s degree from Juilliard, in addition to a degree in history from Cambridge University, plus a master’s in historical performance (organ and harpsichord) and an artist diploma (organ) from Oberlin. END_OF_DOCUMENT_TOKEN_TO_BE_REPLACED

As organizations gingerly take steps to open up for business, it’s refreshing to have new content to listen to and write about after a solid six months of archival footage. END_OF_DOCUMENT_TOKEN_TO_BE_REPLACED

END_OF_DOCUMENT_TOKEN_TO_BE_REPLACED

Over the past few years, Brian Giebler has visited Northeast Ohio in settings both orchestral and choral, and with repertoire as diverse as Stravinsky, Bach, and the local premiere of a new work. In his impressive solo recording debut a lad’s love, released on Bridge Records, the New York City-based tenor turns his focus to British songs from the first half of the 20th century — a mix of cycles and individual works — and tops off the playlist with a touch of the modern. END_OF_DOCUMENT_TOKEN_TO_BE_REPLACED

To steal a phrase from the third-century Greek philosopher Sextus Empiricus, the mills of the gods grind slowly, but they grind exceedingly fine. The same goes for Deutsche Grammophon. It’s been a dozen years since they were recorded in Hamburg in 2009, but the German company has now issued fifteen Rachmaninoff piano pieces magnificently and poetically played by Sergei Babayan. END_OF_DOCUMENT_TOKEN_TO_BE_REPLACED

END_OF_DOCUMENT_TOKEN_TO_BE_REPLACED

After considering all its options, Cleveland’s period ensemble Les Délices decided to fully embrace the idea of creating pre-recorded “shows” in the place of live, in-person performances this season. END_OF_DOCUMENT_TOKEN_TO_BE_REPLACED