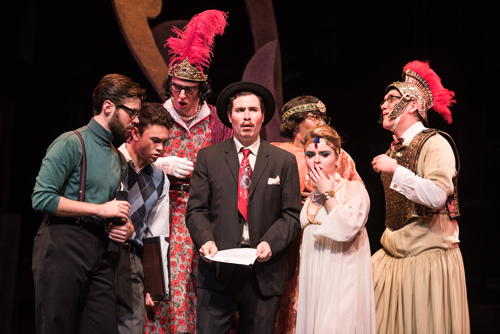 Jonathon Field’s Oberlin Opera Theater shows are always fresh and surprising, but his versions of Donizetti’s Viva la Mamma and Poulenc’s Les Mamelles de Tiresias burst onstage Wednesday evening in a laughfest of satire and surrealism. With casts that would put many professional companies to shame, these are must-see productions that will prick up your ears and kick-start your imagination.

Donizetti’s two-act farce must have allowed the composer to blow off a career’s worth of frustrations. The piece lampoons the conventions of 19th-century Italian opera, with its hierarchical rules about the number of arias each singer should expect.

In Viva la Mamma, a decidedly mediocre company is getting ready for a performance of Romulus and Ersilia in the provincial town of Rimini, but things aren’t going well. Corilla, the prima donna (sung by Vanessa Croome), refuses to rehearse. Donna Agathe (Jeremy Harr), the Neapolitan Mamma of seconda donna Luiga (Amber Monroe) demands more arias for her daughter. 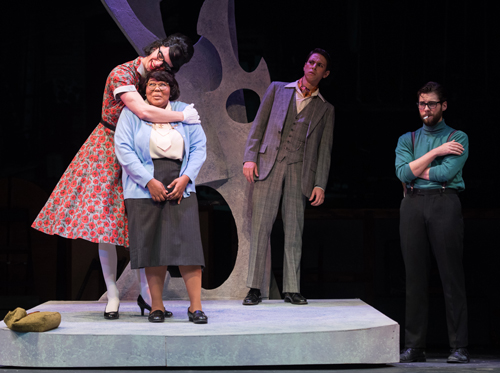 Guglielmo, the Russian primo tenore (Santiago Pizarro) can’t remember his lines. Stefano, a baritone (Joseph Klinger) gets snoggered during the dress rehearsal. Vincenzo, the composer (Kyle Miller) and Orazio, the librettist (Thomas Valle-Hoag), try to keep up with the demands, while the impresario (John Paul Jennings) wisely decides to skip town.

Did we mention that Mamma Agathe is a baritone in drag? Eventually, she steps in to save the production with a donation of jewelry after the town council cuts off the company’s stipend. 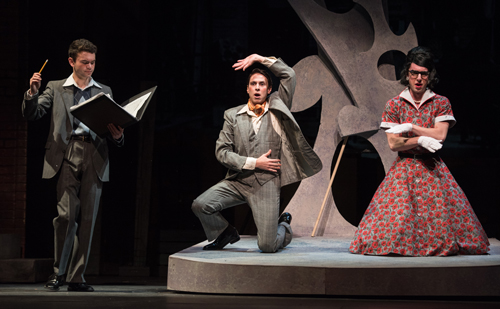 All this looniness — too believable if you’ve ever been involved in opera — is set to Donizetti’s ornate and beguiling music. The singers carried it off with brio and fine comedic acting (everyone was impressive, but Pizarro was a standout). Joseph Klinger was hilarious as a drunk centurion.

Jonathon Field’s stage direction was full of droll detail, especially his parodies of Martha Graham movements. And anyone who remembered Field’s La finta giardiniera from two years ago dissolved in laughter when his signature white rabbit appeared (Pizarro again). Down in the pit, Raphael Jiménez’s Oberlin Orchestra sounded lithe and polished.

The second half of the evening was daffy in a different direction. Les Mamelles de Tireseas, Poulenc’s post-WWII collaboration with Guillaume Apollinaire, packages a societal message (“Make more babies”) in a surrealist wrapping.

The fun began when the director (Dylan Fabas) ducked The Hook after his opening remarks, only to be dragged off by his heels under the curtain. Left behind, his yellow-gloved hands crawled off in opposite directions. 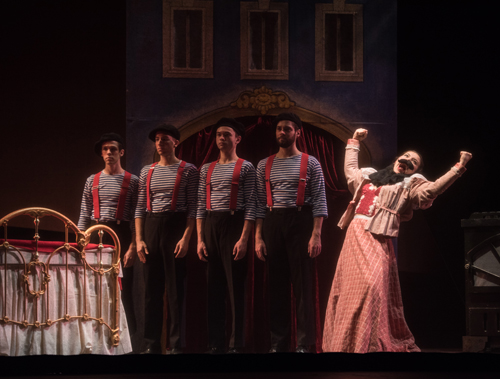 The curtain rose on a tense domestic scene between Thérèse (Olivia Boen) and her husband (Nicholas Music), who was reading in bed — an immense lit matrimonial.

Fed up with domestic duties, Thérèse decided to become a man, instantly growing a beard and a moustache. Her untethered breasts — red and blue balloons — eventually drifted up into the flies. After dressing her husband as a woman, Thérèse tied him in a chair and wheeled him into the next scene á la Hannibal Lecter.

The plot got weirder. A gendarme (Ryan Dearon) was smitten by the cross-dressed husband, who read a newspaper headline (in the Oberlin Review!) calling on the populace to reproduce. He complied, making more than 40,000 babies in an afternoon (they all crowded onto the bed making amusing baby noises). 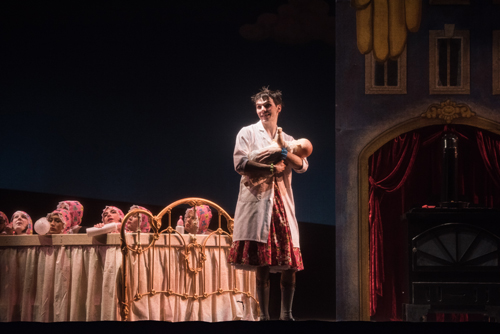 Eventually, Thérèse reappeared as a fortune teller with dire pronouncements for those who didn’t run right home and make babies. The final scene erupted in an enthusiastic, elaborately choreographed production number that reached its zenith just as blue and red balloons dropped down on the front rows of the audience. 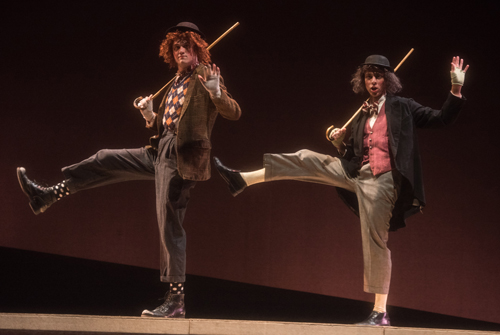 Images from Dali, Magritte and Ubu Roi worked into Laura Carlson Tarantowski’s clever set design underlined the absurdity of the action, along with the dada duo of M. Lacouf (Santiago Pizarro) and M. Presto (Matthew Burn), who appeared several times dueling to the death, then rising to shake hands. The fine chorus, prepared by Gregory Ristow, was brightly attired, the men dressed as French sailors (costumes by Chris Flaharty).

Although comedic absurdity often claimed the foreground in this production, singing and acting values were impressive. The two leads, Nicholas Music and Olivia Boen, sang their tricky vocal lines (some stratospheric ones in Boen’s case) with confidence. Jiménez and the Oberlin Orchestra brought Poulenc’s eclectic score to life with tight ensemble playing and a multitude of incidental solos.

Even if the audience — amused by the charge to reproduce — didn’t dash for the exits intent on making babies, they enjoyed a great evening of expertly crafted nonsense, flawlessly directed and brilliantly performed.

Oberlin Opera Theater repeats the double bill on Saturday evening, November 5 at 8:00 pm, and on Sunday, November 6 at 2:00 pm.

The cimbalom was the feature of the show, an instrument capable of taking on many personas. Its performer, Chester Englander, has shaped his career around the instrument, and has inspired composers to write more repertoire for it, some of which was presented on the program. END_OF_DOCUMENT_TOKEN_TO_BE_REPLACED

You wouldn’t expect that acoustic from a glance at the nave, which is wide and long, but not especially lofty. But when I guest conducted a local amateur choir and professional orchestra in Beethoven’s Mass in C there a few years back, during the first rehearsal we released the final chord of the “Gloria” and listened in astonishment for the next several seconds. The sound continued to roll down the space like the big wave that surfers dream about. END_OF_DOCUMENT_TOKEN_TO_BE_REPLACED