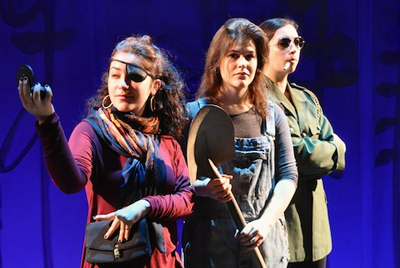 “I could not make this opera stranger than it already is,” Oberlin Opera Theater director Jonathon Field told ClevelandClassical in a recent interview. After witnessing the opening night of Oberlin’s production of La finta giardiniera, with its jumbo-sized rabbits that march in slow motion across the stage, I have to disagree. If this opera was strange to begin with, Field didn’t hold back in giving it an extra nudge off the deep end.

The opera centers on the pretend garden-girl of the title, Violante. Having been stabbed and left for dead by her jealous lover, Count Belfiore, Violante is still in love with him and seeks him out. (Okay…) She and her servant Roberto take up fake identities (under the names Sandrina and Nardo, respectively) as gardeners at the estate of the Podestà (a type of mayor). A love heptagon ensues, involving those mentioned plus the Podestà’s housekeeper (Serpetta), niece (Arminda), and niece’s ex-lover (Don Ramiro).

The student singers were strong across the board. Andrew Groble as Roberto/Nardo was stellar, his bass rich and mature. Soprano Rose Kearin as Violante/Sandrina sang beautifully and musically (one of her high notes seemed even to astonish an onstage bunny), while fellow soprano Juliana Zara was lights-out in a sassy first-act aria, dropping down from a stunning high note to an even more stunning pianissimo. Tenor Daveed Buzaglo, scheduled to perform the role of the Count with the Friday/Sunday cast, stepped in admirably on Wednesday due to an illness, boasting sleazily with rolled r’s in one recitative. 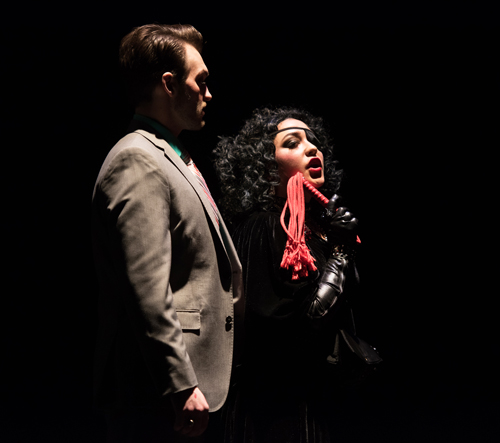 Chris Flaharty’s eclectic costuming was mostly brilliant. The design for the bunny costumes was something special, a sort of rabbit onesie, its mask sporting a devilish bunny smirk. It’s part of what made the first hare sighting of the evening so hilarious. Arminda’s black velvet dress over red tights heightened Zara’s feisty presence, and her eye patch was an interesting touch, suggesting a painful past for the seductress. Serpetta’s frilly pink dress with blonde, mop-head hair was the perfect match for soprano Julie Crookston’s ditzy, delightful interpretation, while military garb fitted mezzo-soprano Elana Bell’s appropriately stiff take on the role of Don Ramiro.

A few characters’ costumes were less successful. The superhero costumes for the Count and Violante/Sandrina, as well as Roberto/Nardo’s eye-popping clown outfit quickly lost their appeal. Furthermore, the latter obscured Groble’s expressions at times. A bland religious robe, meanwhile, didn’t do anything to bolster the mostly forgettable character of the Podestá.

As the only one left uncoupled in the end, the Podestá plays an interesting structural role in the opera. Field set the character apart by putting him in a wheelchair, which paved the way for his miraculously gaining the ability to walk in the end. A heavenly glow shone on the empty wheelchair after the Podestá walked offstage — lighting designer Jeremy Benjamin’s final touch in the production. It felt tacked on, though maybe it would have worked if the character simply had more personality. The biggest impact of the wheelchair may have been its inhibition of tenor Nicholas Giunta’s stage presence as the Podestá, though perhaps he could have done more with the prop. On the topic of lighting, I enjoyed Benjamin’s chessboard-esque take on ensemble scenes, putting each character in his/her own square of light like the game this opera is. 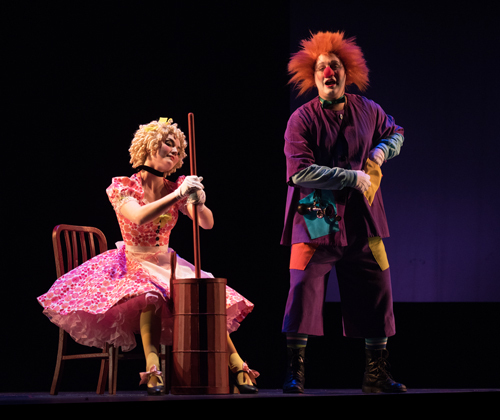 Conductor Raphael Jiménez’s orchestra was top-notch, capturing the franticness of the action with bristling energy. Flutist Tasi Hiner’s and oboist Brooks Fisher’s pleading and singing lines grabbed the ear, and faculty harpsichordist Javier Gonzalez was as sensitive and impressive a partner as you could ask for in the evening’s many recitatives. If the music isn’t quite the hook Mozart hangs his hat on (he was only 18 at the time), it was still enjoyable.

And of course: the bunnies. The six actors who rotated through the parts (Tayte Mitchell, Theodora Nestorova, Santiago Pizarro, Sarah Sims, Alexa Weeks, and Adam Wells) nailed the cottontails’ molasses movement and fiendish antics — like switching the stage placement of Violante/Sandrina and the Podestá so that the Count would accidentally kiss the latter. After their tricks they slapped their rabbit knees in delight. 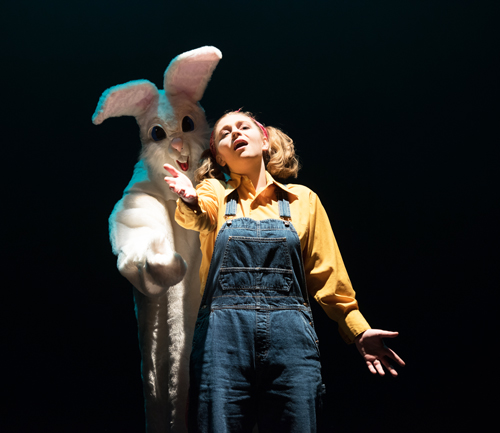 Field may have been overenthusiastic in the use of this clever, self-invented device. Several times the bunnies entered the stage right in the middle of arias, distracting from some of the singers’ best moments. In one memorable aria by Violante/Sandrina, a rabbit stood behind Kearin, maneuvering her arms even as she sang. Still, credit Field for putting his own uniquely bunny-shaped stamp on all our memories.

The music isn’t easy to play, either. Over the course of two hours, all of the musicians brought fantastic focus to the unrelenting tricky rhythms and countless layers of parts, all of which require a high level of individual responsibility. Even in the moments of calm, the accompaniment remains perpetually unsettled. Adams — who made a sprightly presence on the podium — combines minimalist, repeating motives in gradual layers, which eventually become so dense they overwhelm the senses. Lisa Wong deserves special mention for her thorough preparation of the Cleveland Orchestra Chorus, as does Jennifer Rozsa for the Children’s Chorus, which made a brief but memorable appearance in the last few minutes. END_OF_DOCUMENT_TOKEN_TO_BE_REPLACED

Warner was a fitting choice not just symbolically, but also sonically. The combination of Baroque strings, theorbo, harpsichord, and organ created a nice blend and balance, allowing the opportunity for softer instruments to stand out. In Johann Rosenmüller’s Sonata à 5 in g, Doug Balliett’s violone pizzicatos resonated beautifully, and in Johann Heinrich Schmelzer’s Sonata in d, harpsichordist Elliot Figg became an equal player in the texture with his clever improvisations. The slight exception was Joshua Stauffer on theorbo — despite the instrument’s big physical presence on stage, he received little time in the spotlight. END_OF_DOCUMENT_TOKEN_TO_BE_REPLACED