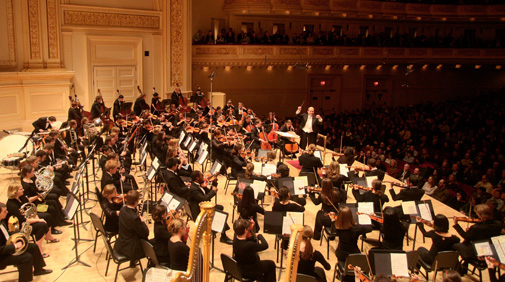 As a music journalist, I have had many opportunities to have aside conversations with artists about their favorite concert halls. While everyone mentions the acoustic of places like Severance Hall, for example, most add that they can also feel the ghosts that inhabit these storied venues.

Without question one of the most iconic halls in the United States is Carnegie Hall, and on Saturday, January 19 the Oberlin Orchestra and College Choir will perform among the ghosts of Tchaikovsky, Dvořák, Mahler, Bartók, George Gershwin, Billie Holiday, Benny Goodman, Judy Garland, and The Beatles, to name only a few. To view the full roster of Carnegie Hall ghosts, click here.

You can hear a preview concert by these Oberlin ensembles on Wednesday, January 16 at 7:30 pm in Finney Chapel. Gregory Ristow will lead the Choir in Tarik O’Regan’s Triptych and Stravinsky’s Les noces, and Raphael Jiménez will lead the orchestra in Elizabeth Ogonek’s All These Lighted Things (three little dances for orchestra) and Debussy’s La Mer. Click here for the live webcast.

When choosing works to take to New York, Jiménez said that he looked for repertoire that would show the strengths of the orchestra, and La Mer was at the top of the list. “It has opportunities for everybody in the orchestra to shine,” he said during a telephone conversation. “It’s a challenging piece for any ensemble, not only technically but also the style.” 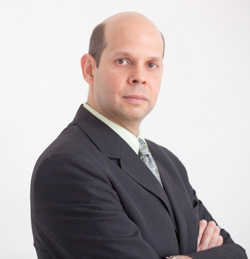 Another consideration was selecting pieces that reflect what the Conservatory is as an institution. “Oberlin is known for new music. It is the birthplace of Eighth Blackbird, the International Contemporary Ensemble (ICE), and many prominent new music performers. New music is part of the culture here, and the Ogonek not only gives us the opportunity to feature music by a member of our extraordinary composition faculty, it shows that we are an institution that is committed to new music.”

All These Lighted Things was written for and premiered by Riccardo Muti and the Chicago Symphony, and like La Mer, it is also an exploration of color and natural sound. “Like in the second movement of her piece, the water is flowing everywhere. There’s a connection of water and nature between both pieces.” Click here to listen to Elizabeth Ogonek talk about her work.

During his tenure, Jiménez has never shied away from challenging his players while on the road. In January of 2016 he led the Orchestra in Stravinsky’s Rite of Spring at Symphony Hall Chicago, although he views La Mer as a somewhat bigger challenge. “With the French repertoire there are a lot of things that are between the notes — there is a lot of space and color — and it’s important to understand how your small contribution to the texture plays such an important role.”

I mentioned that this week’s program is an impressive undertaking especially for an undergraduate orchestra. “We don’t normally talk about the fact that we are an undergraduate institution,” he said. “We don’t like to use that as an excuse, but sometimes we do need to remind ourselves that some of the students are very young, and for them this will be an adventure to get to play this repertoire in one of the most iconic music venues in the world.”

What does he hope the students will take away from performing in Stern Auditorium at Carnegie Hall? “They need to learn how to play the hall. Simon Rattle used to say that ‘the hall is the instrument that the orchestra plays,’ and you have a few hours to get used to a different instrument. So to get the hall to sing, you have to be collaborators with the hall. Saturday’s concert is also about what Carnegie Hall means in the history of music in the United States. To play in a historic place shows who we are as an institution.”

Saturday’s concert also marks the second time in his tenure that he has taken the orchestra to Carnegie Hall. “These eight years have been very nice and I’ve enjoyed my time immensely. I have been able to establish a culture of orchestral playing and I can now say that it is my program.” Jiménez added that his position at the Conservatory is unique in that he is the faculty member who deals with the largest number of people for the greatest amount of time. “They see me almost every single week for four, sometimes five years. It is a challenge and a big responsibility, but I have beautiful repertoire on my side.”

In addition to establishing that orchestral culture at Oberlin, Jiménez is also establishing a culture of conducting. “A current conducting student of mine, Matthew Straw, was just admitted to the competitive Aspen Conducting Academy. He will join a former student of mine, Maurice Cohn, who is currently getting his master’s at Eastman. So we will have two Obies out of nine students admitted to this program for the summer. I am proud of the fact that we are providing very good training to our undergraduate conductors and that we are definitely sending out people very well prepared for the next step.”

END_OF_DOCUMENT_TOKEN_TO_BE_REPLACED

Tower dedicated this surprisingly brief work to “women who take risks and are adventurous.” Adventurous to be sure. While the opening theme is a subtle echo of Copland’s, the CSO brass was remarkably bright, crisp and crackling in its relentless morphing of the motif into quick, layered variations, both delicate and discordant, robustly spiced with startling bursts of timpani. END_OF_DOCUMENT_TOKEN_TO_BE_REPLACED