The concert opened with Johannes Brahms’ Tragic Overture. By turns incisive, beautiful, mysterious, maybe even playful in its melancholy, the work presents a wider spectrum of feeling than its title suggests — and conductor Raphael Jiménez and the Oberlin Orchestra kept their fingers on the pulse of it all. Blend and intonation were excellent, and the pacing from Jiménez was masterful, keeping the tempo moving and every moment fresh.

Next came Iván Enrique Rodríguez’s A Metaphor for Power, a programmatic work that addresses societal inequalities in America and the “turbulence of ideologies, dreams, and hard-hitting realities,” as the composer writes in his program notes. As a Latino composer, he adds, the piece “takes on a more vivid significance” given that many of the events that fed into it have been part of his personal experience.

Back to the word “turbulence” — Rodríguez succeeds in creating the feeling of being tossed about in a storm that is constantly changing in shape. Single, rapid musical lines jump from section to section of the orchestra, challenging you to follow what exactly is happening to you (or your country). And at key moments, he conjures up the unsettling sound of a large and uneasy crowd with the players’ spoken murmurings. Short quotations of patriotic tunes including The Star-Spangled Banner toe the line just right, helping to express the meaning of the piece while being musically “corrupted” enough to avoid landing on the nose.

In the end, trumpeter Steven Cozzuli earned a bow for his impressive, clear-toned solos, and Rodríguez himself was invited onstage, met by a standing ovation. He reacted with graciousness and relatable emotion. 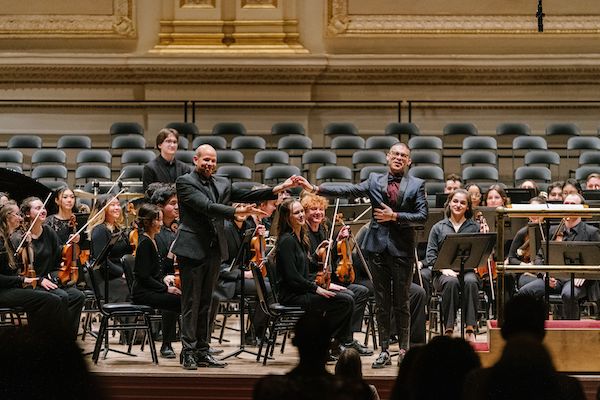 Black Canadian-American composer and Oberlin alumnus R. Nathaniel Dett’s The Ordering of Moses served as the evening’s closer. An oratorio, it tells the story of Moses leading the enslaved Israelites out from under the Pharaoh’s oppression — a tale that can stand in for so many events of challenge and triumph throughout history, and African American history in particular. On Friday, there was a palpable sense that this performance, along with that of the Rodríguez, was a celebration of racial diversity in music — and a powerful one.

Too many people to name delivered important contributions to the excellence onstage. The solemn orchestral introduction featured memorable solos from cellist Amanda Vosburgh and bassoonist Laressa Winters, both playing with a vivid sense of pathos. Later, hornist Jonathan Bruzon delivered a lovely melodic line, effortless and mellow in tone. Of the four guest soloists, baritone Eric Greene was the first to sing, showcasing a commanding presence and a deeply rich tone in his role as the Voice of God. Also making her mark early on was mezzo-soprano Ronnita Miller, the Voice of Israel, who impressed with her power, and the depth of her low range. 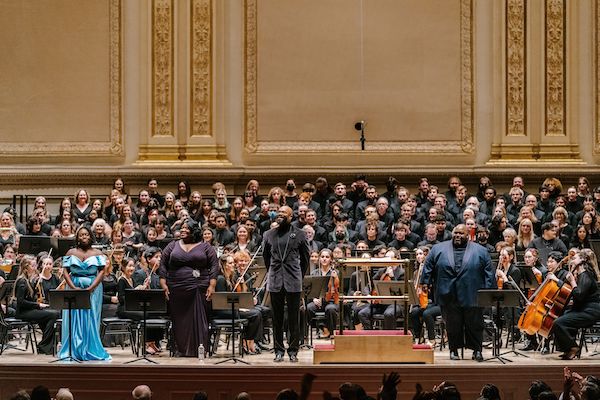 One of the most stirring moments in the piece is the first appearance of the spiritual Go Down, Moses. Here it showcased several virtues of the large chorus, made up of the combined forces of the Oberlin College Choir, Gospel Choir, and Musical Union. Prepared by Gregory Ristow and Ben Johns, the group shone with precise intonation, clear diction, and most of all their remarkable “conversational” skills during Dett’s complex counterpoint.

The spiritual also served as an introduction to the first words from tenor Limmie Pulliam, playing the role of Moses. Looking out into the hall with intensity in his eyes, he wowed from the get-go with vivid passion and gleaming tone.

Soprano Chabrelle Williams was the final soloist to be heard. Her attractive, light voice had a distinguished quality well-suited to her role as the prophetess Miriam. And in a concert full of highlights, it was her final duet with Pulliam (a pair of Oberlin alumni, to boot) that left the most lasting impression of the evening, both of them leaping into the outer reaches of the vocal atmosphere with their final notes — and pulling all of us up with them. 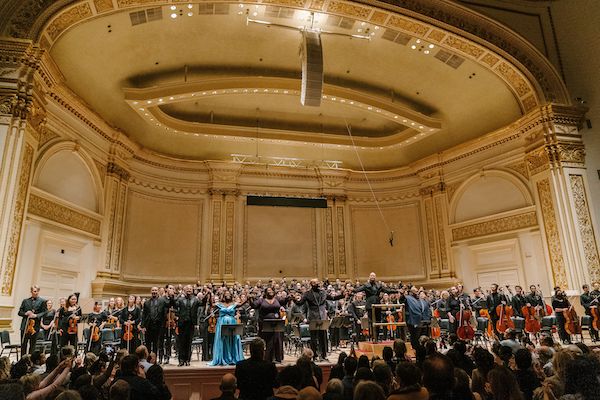 As part of the visit to New York, a group of scholars from the fields of African American music, choral music, ethnomusicology, music theory, religion, and music performance gathered at Kaufman Music Center to discuss Dett’s music, life, and ideas. The event was recorded and is available to watch here.

END_OF_DOCUMENT_TOKEN_TO_BE_REPLACED

The strings-only work by Berg has made relatively frequent appearances on the Orchestra’s programs. In 2021, the musicians recorded it for the In Focus series, and it appeared again on last year’s European tour. Friday’s rendition maintained the group’s characteristic light and effortless playing, each section blending as much as possible to echo the work’s original form as a string quartet. At fifteen minutes total, the piece is quite short, but the dense encoded musical meanings require some extra-attentive listening. Splitting up the three movements ensured that each one could be appreciated on its own. END_OF_DOCUMENT_TOKEN_TO_BE_REPLACED