That’s certainly nothing like witnessing the event in situ surrounded by a lively audience largely made up of students, but Oberlin’s webcasts have steadily improved to the point where they rival commercial broadcasts. Video and audio match up (they used to be a tiny bit offset), and cameras and operators have been added to zoom in on different sections of the ensemble (and cameras nearly always point to the right musicians at the proper time).

Spano’s return to the campus was a big event. Although he’s officially held the post of Professor of Conducting at the Oberlin Conservatory since 1989, he hasn’t led an ensemble there in years. During this visit, he also appeared as pianist in a chamber music recital with Adkins and violinist Marilyn McDonald.

Hartke, who is Professor of Composition at the Conservatory, said in an interview with this publication that his new concerto was inspired by unsettling world events, takes its name from the Latin hymn that asks for “peace in our day,” and that the composition of its concluding moments coincided with the Tree of Life Synagogue massacre in Pittsburgh, “turning what had begun as an abstract musical elegy into a very real one.”

The mood of the concerto is indeed elegiac, a lament that gradually brightens in its affect as its three movements unfold. Alternating restlessness with calm, and rhythmic ostinatos with flowing melodic lines, the piece initiates a conversation between soloist and orchestra from the very beginning, when the cello’s first high, keening utterance is answered by the upper strings.

The second-movement scherzo is highly rhythmicized with acerbic interchanges between soloist and orchestra. A lyrical solo section is interrupted by brass and chimes, and the movement ends frantically — and ambiguously.

Timpani and soloist exchange troubled thoughts at the beginning of the third, but shimmering chorales and tender harmonies begin to suggest hope. Solo cello returns to something resembling its opening statement, answered by short, complex orchestral chords. A lovely wind chorale leads to valedictory unisons in solo cello and low strings. 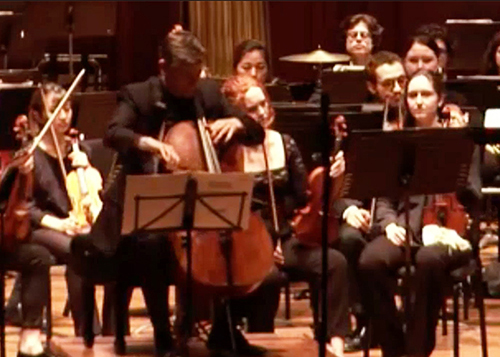 You’d have to be familiar with plainchant and Venezuelan folk songs to appreciate all the references Hartke embeds in the concerto, but that didn’t detract from the fine impression that Da Pacem left in the ear on first hearing. Darrett Adkins made his solo part gripping, and Stephen Hartke masterfully wrapped his colorful orchestration around the cellist in such a way that Adkins never had to fight his way through the texture. Spano led the Oberlin Orchestra in a tight performance that still left his players room to breathe and play expressively.

Jennifer Higdon was a brave woman to follow the example of Bartók and Lutosławski when she wrote her Concerto for Orchestra. In contrast to those Europeans, hers is brashly and unapologetically American in style.

Its five movements allow plenty of opportunity for the percussion, brass, winds, and strings to strut their various stuff in a highly rhythmic context. The last movement is a perfect lovefest for those musicians in the back of the orchestra who make music by striking things (or sometimes bowing on xylophone keys). The Concerto is long, somewhat repetitive, and borrows more than a few gestures from Hindemith and Copland, but it’s also pure fun, and Spano and the Oberlin Orchestra gave it a performance both precise and ebullient.

Afterwards, Robert Spano waded through the Orchestra, winningly giving standups and hugs to sections and soloists with whom he had so clearly bonded this week. It would have been fun to be in Finney Chapel on Friday to share in the excitement, but the webcast was the next best thing.

END_OF_DOCUMENT_TOKEN_TO_BE_REPLACED

Rodgers & Hammerstein’s Cinderella was originally produced for television in 1957 — seven years after the animated Disney film was released — and starred Julie Andrews. According to the Rodgers & Hammerstein website, it was viewed by over 100 million people. END_OF_DOCUMENT_TOKEN_TO_BE_REPLACED

The story line has its origin in an 1855 play and an 1842 farce that Thornton Wilder mined for his 1938 play The Merchant of Yonkers. When that turned out to be a flop, in 1954 Wilder made the crucial decision to re-center the show around the character of the legendary marriage broker Dolly Gallagher Levi and renamed it The Matchmaker. END_OF_DOCUMENT_TOKEN_TO_BE_REPLACED

The Dodero Center for the Performing Arts at the Gilmore Academy in Gates Mills is one feature of an impressive campus. The auditorium is shallow, the stage is deep, and the ensemble played without a shell. Throughout the program, the sound, especially in instruments’ lower registers, tended to disappear. END_OF_DOCUMENT_TOKEN_TO_BE_REPLACED