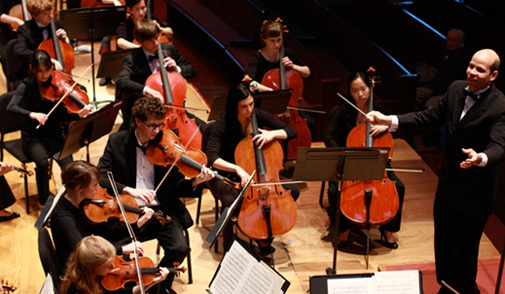 Raphael Jiménez led the Oberlin Chamber Orchestra in its season-opening concert in Finney Chapel on Thursday evening, September 22. The program was a survey of early 20th-century works by some of the era’s greatest masters: Stravinsky, Ravel, and Copland.

Beginning the festivities was Igor Stravinsky’s Second Suite for Small Orchestra, originally composed as an easy piano duet for his two young children, and orchestrated a few years later. The instrumentalists brought out the composer’s playful side: the flutes and clarinets traded taunts, the brass and bassoons bounced themes between each other, and the percussion pounded when you least expected it. Though the tunes may come off as simple, Stravinsky’s refined orchestration makes the work fun and exciting. The Orchestra played with remarkable precision under Jiménez’s leadership.

Oberlin professor of piano Haewon Song was featured in Maurice Ravel’s Piano Concerto in G. The composer combines Mozartian clarity and textures with impressionism and jazz to create one of the most original and enjoyable concertos from the 20th century. 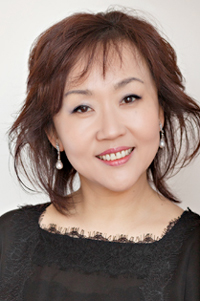 Song’s runs at the outset were brilliant and clear — a musical equivalent of the reflection of a rainbow in a waterfall. This vibe was mirrored in the Orchestra’s playing, particularly in the two soaring violin lines, ensemble and soloist sharing a lovely conversation. Wyeth Aleksei brought to life the jazzy trumpet solos, and harpist Anya Garipoli flavored the performance with captivating mysticism. Song brought a soulful and ethereal contemplativeness to the opening of the second movement, qualities that continued during the heartwarming English horn solo by Tanavi Prabhu. The balance between Song’s musical prowess and the Orchestra’s tender moments resulted in a performance full of charm and grace.

Capping off the night was Aaron Copland’s Suite from Appalachian Spring. Originally a ballet, it evokes the pastoral landscapes of Appalachia. After a musical sunrise, the trombones, led by Justin Sims, blared like radiant Apollo in the second movement. Particularly enjoyable were the many brief clarinet solos by Silvio Guitian, as well as the buoyant pizzicatos and wind themes during the cowboy hoe-down. The famous Shaker Hymn was played with luscious resonance in the cellos and basses, headed by Jeremy Kreutz and Michael Martin, respectively. The music faded away while invoking sounds of nature.

Raphael Jiménez once again took to the podium on Saturday evening, September 24, as the Oberlin Orchestra (known on campus as “big orchestra”) kicked off their year with a Russian-themed concert in Finney Chapel.

First on the program was Sergei Rachmaninoff’s symphonic poem The Isle of the Dead, Op. 29. Inspired by Arnold Böcklin’s painting of the same name, the work depicts two figures with a coffin on a small boat heading toward an imposing island. Rachmaninoff only saw a black-and-white reproduction, perhaps further intensifying the bleak feelings he put into his music. Jiménez guided the Orchestra steadily through the work’s ominous beginning to the forceful climax and the fade-away ending, making a fitting prelude for what was soon to come.

The thrill of the evening was Dmitri Shostakovich’s Symphony No. 5 in d, a favorite of audiences worldwide. It was nice to see Finney filled for this long and daunting orchestral epic.

Shostakovich wrote the piece after Stalin’s press eviscerated some of his earlier works, causing the composer to fear a potential Siberian exile. Speculation has since widely surfaced as to Shostakovich’s motivation behind his masterpiece, as he often imbued his music with cryptic messages. Regardless, the premiere was a triumph, and the Symphony remains a cornerstone of orchestral repertoire.

After an opening full of conviction, the violins achieved a brilliant balance between beauty and eeriness in the second theme, with concertmaster Liuwenji Wang supplying chilling solos. The first movement unfolds seemingly into every emotional direction possible, from a lively (if maniacal) gallop to an intimate flute and horn duet, captured with tender delicateness by Aram Mun and Madison Warren. The section came to a close with a celesta line played hauntingly by Laura Spector.

Jiménez led the ensemble through the following Allegretto with a playfulness that ventured into the grotesque, bringing out booms and crashes in the percussion and a youthful energy in the melodious stretches. His tempo for the Largo was expansive, but never too slow. The strings played with refined articulation; their clear intonation and appropriate vibrato resulted in an enchanting blend of sound. At one point during a section full of tremolos, you would have thought you were caught in the vortex of a storm. Harpist Rose Michael’s ending solo was simply ethereal.

Jiménez began the finale with a vengeance, and the music caught fire during a marvellously placed accelerando, culminating in a delightful frenzy of noise before a more serene, if menacing, section. He took the final bars slowly, which made each note sound all the more penetrating and forceful, especially with Louis Pino’s dynamic timpani strokes. The audience in Finney Chapel was hit by a wall of sound so huge that it would make Donald Trump jealous. A gripping finish to a long, Russian night.

The music isn’t easy to play, either. Over the course of two hours, all of the musicians brought fantastic focus to the unrelenting tricky rhythms and countless layers of parts, all of which require a high level of individual responsibility. Even in the moments of calm, the accompaniment remains perpetually unsettled. Adams — who made a sprightly presence on the podium — combines minimalist, repeating motives in gradual layers, which eventually become so dense they overwhelm the senses. Lisa Wong deserves special mention for her thorough preparation of the Cleveland Orchestra Chorus, as does Jennifer Rozsa for the Children’s Chorus, which made a brief but memorable appearance in the last few minutes. END_OF_DOCUMENT_TOKEN_TO_BE_REPLACED

Warner was a fitting choice not just symbolically, but also sonically. The combination of Baroque strings, theorbo, harpsichord, and organ created a nice blend and balance, allowing the opportunity for softer instruments to stand out. In Johann Rosenmüller’s Sonata à 5 in g, Doug Balliett’s violone pizzicatos resonated beautifully, and in Johann Heinrich Schmelzer’s Sonata in d, harpsichordist Elliot Figg became an equal player in the texture with his clever improvisations. The slight exception was Joshua Stauffer on theorbo — despite the instrument’s big physical presence on stage, he received little time in the spotlight. END_OF_DOCUMENT_TOKEN_TO_BE_REPLACED