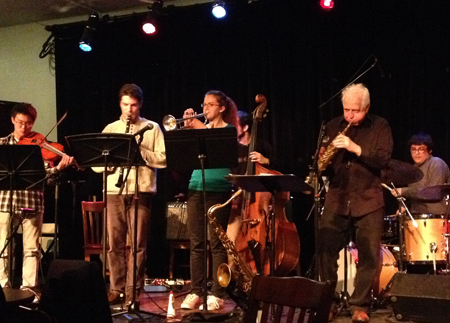 Drewes, “a bad dude,” according to PI Series director Jamey Haddad, is also a multi-instrumentalist whose talents include soprano, alto, and tenor saxophones, clarinets, flutes, drums, percussion, and piano. At the Cat, soprano sax was his weapon of choice to accompany three student PI groups that played sets of mostly his tunes.

With their endearingly oddball instrumentations, each group has a special flavor. PI #2 stands apart with its combination of viola (Seido Karasaki), clarinet (Giovanni Bertoni), and trumpet (Emily Kuhn), who together created beautiful unison colors to open the first piece of the night. This group’s set emphasized short tunes with distinct sections, which the percussionists helped define. Patrick Graney and Danny Frank, along with Haddad, set a laid-back beat to chart new course midway through the first tune, while an intriguing drum interlude helped connect the dots in the second. 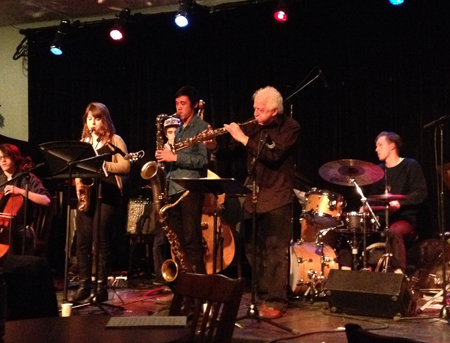 Next up was PI #3, playing longer, more exploratory works. The group’s super, saxy sound — Ana Nelson on alto and Jake Abramson on tenor, plus Drewes on soprano —caught the ear from the start. Add in cellist Isaiah Boden and guitarist Noah Gershwin, making a nice bundle of colors. Bassist Max Weiner, meanwhile, shone with his sensitive opening to the group’s second tune, the kind of playing that eases you to the back of your chair. Their playing was remarkably free-flowing, though like the other groups’ sets, at times it lacked direction, edging into uncertainty. 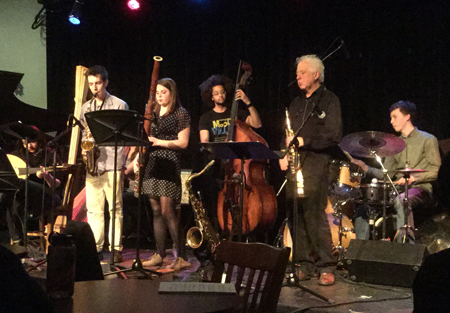 Another rare combination of sounds opened the set by PI #1: bassoon (Corrine Crowley), harp (Caitlin Mehrtens), and oud (Amal Ghulam). A highlight reel for this group would include Crowley’s slick solo, Ghulam’s long glissando that made the crowd go ‘ooh,’ and percussionist Ben Rempel’s ornament of shells. (Quirky percussion equipment popped up all evening long. Two personal favorites were a circlet of keys begging to be —and finally being — jangled, and the sweeping ends of cut-off brooms, used to slap a djembe.)

Drewes seemed to be having a ball all evening long, every solo and response a joyride. “This place is magic,” he said from the stage. And after the students finished, he wasn’t done, closing out the night with four songs in the distinguished company of Jamey Haddad, drums, Sullivan Fortner, piano, and Kip Reed, bass guitar.

Their second tune was a real gem, the kind of thing you feel lucky to have witnessed. Fortner and Drewes (soprano) starred in the mockingly classical work, which had the pair take turns noodling wildly up to sudden cadences and pauses. Putting on a mellower hat for his tenor playing, Drewes sent out a wave of shivers in a slow, pretty tune, then balanced a wild Haddad in one last frenzy, carrying the thinned-out but gracious Cat crowd past midnight. 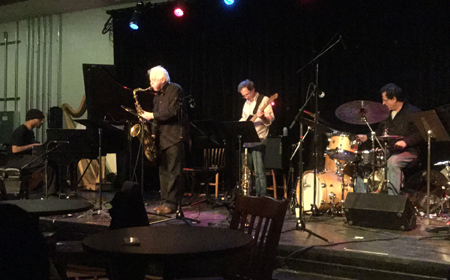 Published on ClevelandClassical.com May 5, 2015.