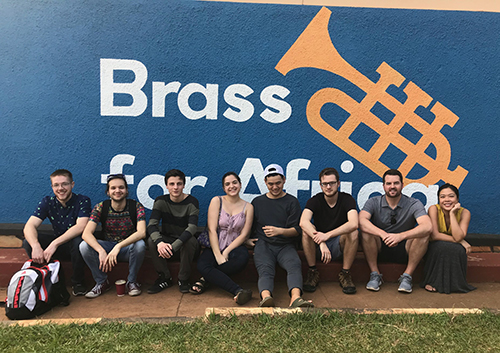 In February of 2009, when British Airways pilot Jim Trott was helping to store 30 past-their-prime brass instruments that were destined for the scrap yard, he had the idea of finding a home for them on his next flight to Uganda. Today Brass for Africa, a U.K.-based non-profit organization that uses music to empower and improve the lives of extremely disadvantaged young people in Uganda, supports more than 1,000 children and young people each week through brass music education.

Trombone professor Lee Allen and six of his Oberlin Conservatory students spent two weeks in Kampala last January immersing themselves in Brass for Africa programs. “It was a very interesting and humbling cultural experience for myself and for the students,” Allen said during a telephone conversation. On Sunday, May 6 at 4:30 pm at the Church of the Covenant in Cleveland’s University Circle, the Oberlin Trombone Choir under Allen’s direction will present a benefit concert for Brass for Africa. Donations, which will be used to purchase and transport used brass instruments to BFA outreach centers, may be made in cash at the door or online.

Allen said that he first became aware of BFA via his friend and fellow trombonist Taylor Hughey. “The last thing I knew she was teaching in China, but when I looked on her Facebook page, I saw that she had been living in Africa. We talked on the phone and she told me about Brass for Africa.”

At first, Allen was skeptical of BFA’s work — was it white privilege imposing its agenda? — but as he learned more about the organization’s organic, holistic approach to providing life skills training to young people from orphanages, street projects and rehabilitation centers, he thought that spending time volunteering would make a meaningful Winter Term project for students. 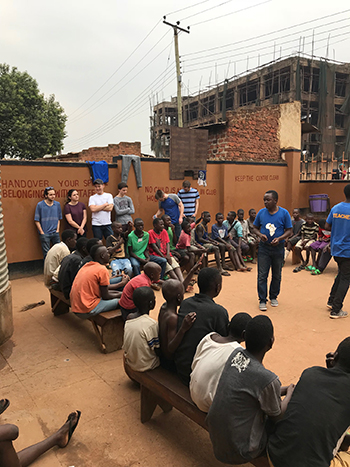 According to UNICEF, half the population of Uganda is aged 14 or below and 71% of children are out of school and are not receiving any form of education. Many are living in households headed by another child, or on the street. “Corruption is rampant in Kampala, and some of these people had been picked up off the streets when they were quite young just for being in the wrong place at the wrong time,” Allen said. “Brass for Africa will sponsor them and act as a kind of parole officer.”

In addition to music instruction, BFA also provides classes in life skills, teacher training, and instrument repair. Allen explained that a key part of the organization’s model is providing employment for former students. “The teachers are trained by hired faculty, then they go to the outreach facilities and teach the kids. They’re given health insurance and a salary.” 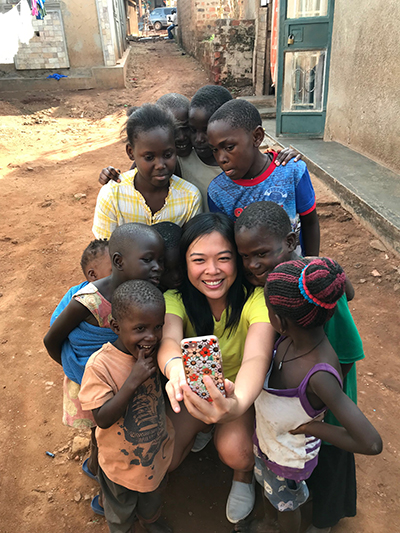 Justin Sims, a senior trombone major at Oberlin, said that when he decided to go on the trip he didn’t fully understand how BFA operates: A visit to a boys’ Juvenile Delinquent Center quickly clarified things. “The center is about an hour outside of Kampala, and I’ve never seen this kind of place before,” Sims recalled. “I don’t think there is anything quite like it here in the U.S. Obviously, we have soup kitchens and shelters — but these are children.”

It was during that visit that Sims said he realized how BFA operates. “It was jolting and quite emotional. BFA is not your typical humanitarian organization — it’s not like the Peace Corps, or a missionary project. Twice a week the teachers bring the instruments to the outreach centers and teach music and life skills. What’s amazing is that the teachers all grew up in these places. They are the realization of the effect that BFA has had in the region.” 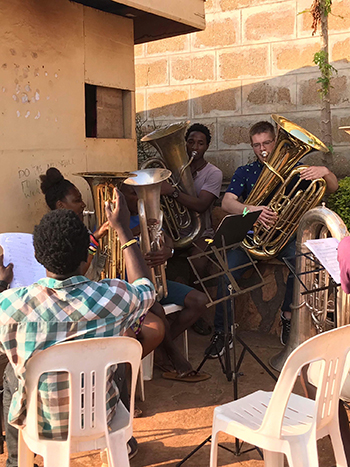 Brass for Africa also partners with other regional social service organizations such as the Mummy Foundation, a refuge and day center for young and vulnerable girls in the Katwe slum. “Bosco Segawa, who set up the foundation, grew up in the Katwe slum.” Sims said. “They started teaching out of a small hut — we hiked about a mile to get to it. That was a crazy experience because it was the worst living conditions you can imagine, yet the center of the modern city of Kampala is less than two miles away.”

How did the experience change Sims? “It rocked my world, and I’m still trying to digest it all,” he said. “Part of the reason I wanted to go on the trip is because I have decided that I want to teach. Although we were just playing concerts and working with the teachers, that experience confirmed my aspirations. I now want to do something with life skills and teaching for a larger cause. BFA gave me a new perspective about how something as simple as teaching and playing music can make such a difference in situations where people are stuck.” 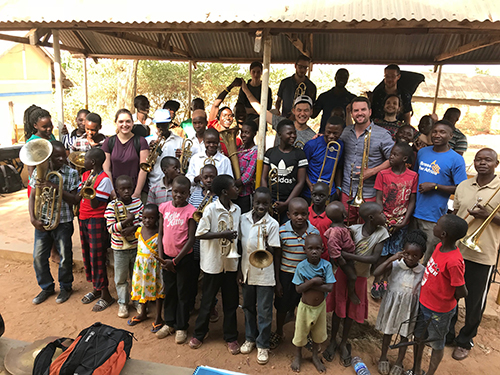 During the two weeks, Allen and the students visited eleven of BFA’s twelve outreach sites. “Right now the biggest problem is that they don’t have enough instruments to take to all of these places,” Allen said. “Some of the schools use what’s called a Pbuzz. It’s a plastic instrument that looks like a vuvuzela, but they do push and pull like a trombone, and they’re easily transportable. They have taught some students to be repairmen, and it is their hope to bring in an apprentice to train people in brass repair.”

On the May 6th concert at the Covenant, the Oberlin Trombone Choir will be presenting music to celebrate Brass for Africa. “It’s also a way to introduce the trombone choir to an audience that might not have heard that homogenous sound,” Allen said. “I hope people will come and have a good time. Justin and I will talk about the trip and we’ll also have a lot of photos — those are worth thousands of words.”

Jackson began the program with a recitation of Langston Hughes’ poem “Helen Keller” — the first of five poems by Hughes that served as interludes between each piece on the first half. END_OF_DOCUMENT_TOKEN_TO_BE_REPLACED

Pianos with pins and tape on strings, a bass drum and tam tam, crotales, Almglocken, and vibes. Microphones were hooked up all around the instruments. The feed was sent to speakers around the room. Lighting designer Nicholas Houfek hung incandescent globes over the arrangement of instruments from thin black wires stretching across the beams. END_OF_DOCUMENT_TOKEN_TO_BE_REPLACED

From the podium, Elim Chan set an ambitious tone for the evening. The rising star conductor, here in her Cleveland Orchestra debut, has a commanding style, and every twist and turn in Saturday’s performance tracked closely with her baton. END_OF_DOCUMENT_TOKEN_TO_BE_REPLACED