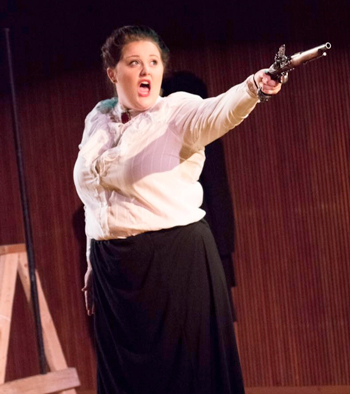 Opera doesn’t get much more intimate than Oberlin Conservatory’s Winter Term production of Richard Wargo’s The Music Shop. Imaginatively directed by Sally Stunkel, Oberlin’s associate professor of opera theater, Wargo’s musical version of an Anton Chekhov story took place on the stage of Warner Concert Hall with the audience seated at the auditorium edge of the platform. Off in one corner, musical director and pianist Daniel Michalak provided the orchestral accompaniment, and the fine and energetic cast of four singers were so close you could see the perspiration on their brows as the action heated up.

That action was delightfully crazy at times. Here’s the story: Ivan (Nicholas Music), the henpecked husband of an overbearing soprano (Cara Bender), is sent to town to search for the sheet music to a song his wife is to sing the next day at the prince’s wedding — among a long list of other errands. He appears at a music shop (“the largest in all of Russia”) run by the flamboyant Dmitri (Dylan Fabas) and staffed by a ditsy shop assistant, Masha (Rachel Liss). Trouble is, he forgot to write down the title of the song.

And so the farce begins. Dmitri and Masha begin ransacking their shelves, singing bits and pieces of familiar songs to try to jog Ivan’s memory. Close, but no luck as the two warble a long series of tunes ranging from Mozart’s Alleluia to The Song of the Volga Boatmen. The frantic search is complicated by Ivan’s hallucinations of his wife and her reactions if he comes home empty-handed. She appears (from the organ loft) as a Valkyrie with a flaming spear (singing you-know-what), and later ventures onstage with a gun.

Dmitri, pushed over the edge, tussles with Ivan, nearly strangles him, and tries to eject him from the store. The day is saved when the two suddenly hear Masha idly humming the long-sought tune from the basement. Finally sent on his way, to Dmitri’s chagrin, Ivan promises to return the next week in search of more music for his wife’s upcoming recital.

Not quite an hour in length, The Music Shop was continuously amusing thanks to Stunkel’s high-energy staging and effective use of only a few bits of furniture and hand props. All four singers were vocally splendid as well as fine actors. Michalak tossed off the complicated orchestral score with verve and precision, only needing to provide a few minimal hand cues to the vocalists.

There are two other parts to Richard Wargo’s Chekhov trilogy (a bedroom comedy entitled The Seduction of a Lady, and a sentimental romance called A Visit to the Country). But The Music Shop is an entertaining stand-alone, the perfect vehicle for a Winter Term project and a hilarious way to spend an hour on Saturday afternoon.

Joining a long list of arrangers, Parker Ramsay has now transcribed the Variations for the modern pedal harp, an instrument for which he holds a master’s degree from Juilliard, in addition to a degree in history from Cambridge University, plus a master’s in historical performance (organ and harpsichord) and an artist diploma (organ) from Oberlin. END_OF_DOCUMENT_TOKEN_TO_BE_REPLACED

As organizations gingerly take steps to open up for business, it’s refreshing to have new content to listen to and write about after a solid six months of archival footage. END_OF_DOCUMENT_TOKEN_TO_BE_REPLACED

END_OF_DOCUMENT_TOKEN_TO_BE_REPLACED

Over the past few years, Brian Giebler has visited Northeast Ohio in settings both orchestral and choral, and with repertoire as diverse as Stravinsky, Bach, and the local premiere of a new work. In his impressive solo recording debut a lad’s love, released on Bridge Records, the New York City-based tenor turns his focus to British songs from the first half of the 20th century — a mix of cycles and individual works — and tops off the playlist with a touch of the modern. END_OF_DOCUMENT_TOKEN_TO_BE_REPLACED

To steal a phrase from the third-century Greek philosopher Sextus Empiricus, the mills of the gods grind slowly, but they grind exceedingly fine. The same goes for Deutsche Grammophon. It’s been a dozen years since they were recorded in Hamburg in 2009, but the German company has now issued fifteen Rachmaninoff piano pieces magnificently and poetically played by Sergei Babayan. END_OF_DOCUMENT_TOKEN_TO_BE_REPLACED

END_OF_DOCUMENT_TOKEN_TO_BE_REPLACED

After considering all its options, Cleveland’s period ensemble Les Délices decided to fully embrace the idea of creating pre-recorded “shows” in the place of live, in-person performances this season. END_OF_DOCUMENT_TOKEN_TO_BE_REPLACED