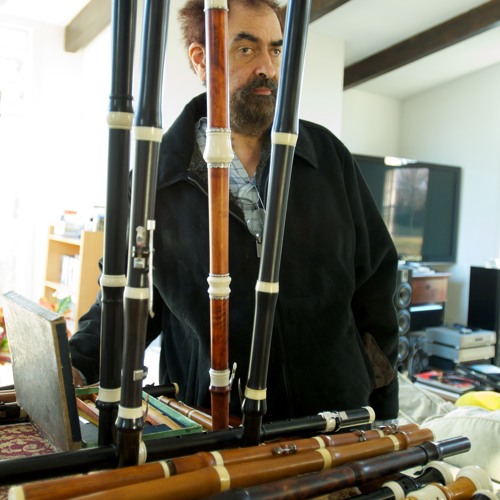 Unfortunately, Lynn’s crystal flute was severely damaged, its foot broken in two pieces. He set out to have it repaired, first looking online for glass restorers. Then it occurred to him that an art restoration workshop was the logical place to turn, and the McKay Lodge Laboratory was only four miles away from the Conservatory. Robert Lodge and Dee Pipik took on the challenge (other repairs were made by Joe Cornia of California).

“They used a special kind of glue that doesn’t yellow or crack,” he said. “It was a fascinating procedure involving coating the inside of the bore with glue and blowing up a balloon inside. When the glue had set, they deflated the balloon.” 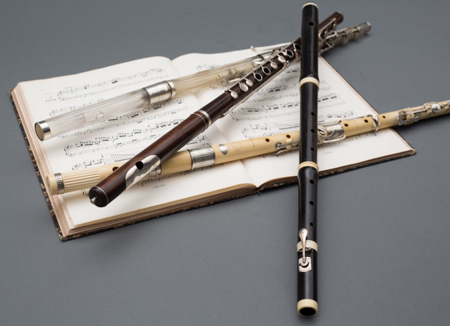 For the May 20 performance, Lynn will be joined by five musicians — all either faculty, graduates, or current students of the Oberlin Conservatory: flutist Kelsey Burnham, violinist Augusta McKay Lodge, violinist and violist Jeff Girton, cellist Catharina Meints, and guitarist Stephen Aron. The program of music by 19th-century flutist-composers is largely drawn from Oberlin’s vast Frederick R. Selch Collection of American Music History. “It’s music nobody knows. All of it is from original editions, and has never been published in modern times,” Lynn said.

Here’s the playlist, along with the historic flutes on which the pieces will be performed:

Charles Cottignies’ Ma Normandie on a 4-key Denis Buffet made in Paris ca. 1810

Contad Berens’ Potpourri from Die Zauberflöte on an 8-key S. Koch instrument made in Vienna, ca. 1830

L.A. Carpentras’ and T. Berbiguier’s Nocturnes Concertans for guitar and flute on a conical Boehm made by Louis Lot in Paris ca. 1900

Gaspard Kummer’s Variations for flute and guitar on a 5-key Bodfroy made in Paris ca. 1835

Turlough O’Carolan’s Irish Airs from The Hibernian Muse on a 1-key Meacham made in New York ca. 1808 and a Kusder London flute in F, ca. 1780

François Devienne’s Quator III on a 1-key Noe Freres made in Paris ca. 1810

Lynn, who has presented similar lecture-demonstration recitals in Romania, Italy, and Portugal, admits that showcasing ten different instruments is not an easy task. “One difficulty of performing on different instruments is that, depending on the time and country in which they were made, they’re tuned at different pitches. In this program, that ranges from A=424 hz. to A=448, and that does affect how you hear tone quality.”

After the performance, Lynn’s flutes will be available for inspection outside Kulas Hall in the Conservatory Lounge, where materials from Oberlin’s Selch Collection — music, instruments, and ephemera — will also be on display.

The music isn’t easy to play, either. Over the course of two hours, all of the musicians brought fantastic focus to the unrelenting tricky rhythms and countless layers of parts, all of which require a high level of individual responsibility. Even in the moments of calm, the accompaniment remains perpetually unsettled. Adams — who made a sprightly presence on the podium — combines minimalist, repeating motives in gradual layers, which eventually become so dense they overwhelm the senses. Lisa Wong deserves special mention for her thorough preparation of the Cleveland Orchestra Chorus, as does Jennifer Rozsa for the Children’s Chorus, which made a brief but memorable appearance in the last few minutes. END_OF_DOCUMENT_TOKEN_TO_BE_REPLACED

Warner was a fitting choice not just symbolically, but also sonically. The combination of Baroque strings, theorbo, harpsichord, and organ created a nice blend and balance, allowing the opportunity for softer instruments to stand out. In Johann Rosenmüller’s Sonata à 5 in g, Doug Balliett’s violone pizzicatos resonated beautifully, and in Johann Heinrich Schmelzer’s Sonata in d, harpsichordist Elliot Figg became an equal player in the texture with his clever improvisations. The slight exception was Joshua Stauffer on theorbo — despite the instrument’s big physical presence on stage, he received little time in the spotlight. END_OF_DOCUMENT_TOKEN_TO_BE_REPLACED