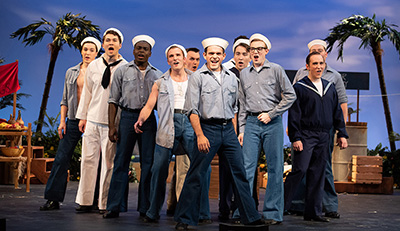 Ohio Light Opera opened its 41st summer season at the College of Wooster’s Freedlander Theatre with the well-loved — and now 70-year-old — Rodgers & Hammerstein musical South Pacific, which premiered on Broadway in April of 1949. Filled with some of their best songs — the enduring and endearing “Some Enchanted Evening” is the most famous — the musical still packs a powerful and meaningful punch in this traditional production directed by Jacob Allen.

I attended the second performance on Wednesday, June 19 which featured the second set of leads in the three main roles of Ensign Nellie Forbush, Emile de Becque, and Lt. Joseph Cable. The show runs through August 9.

Based on James Michener’s Pulitzer Prize-winning collection Tales of the South Pacific, the plot-heavy musical focuses on two love stories in the context of the Pacific Theater during World War II. Set on two islands — the exotic Bali Ha’i and the unnamed one where American sailors are stationed — the storyline involves Emile, an older French planter in love with the young Arkansan nurse Nellie, while Joe, a Marine lieutenant, arrives with a deadly intelligence mission that requires Emile’s help. 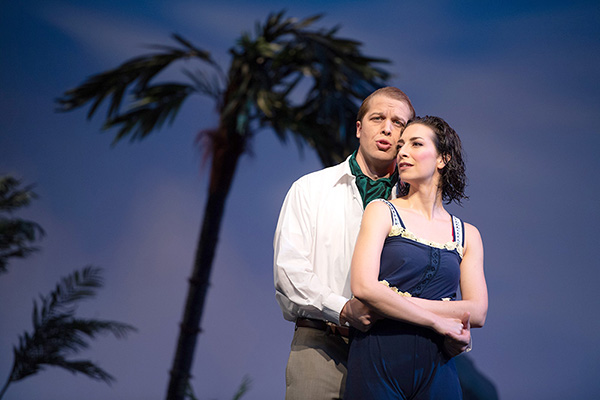 Even though the mission attempts to drive the plot, the real story hinges on Nellie’s and Joe’s racism. Nellie calls off her engagement with Emile when she learns of his late Polynesian wife, while Joe pushes back against marrying his lover, Liat, the Tonkinese daughter of the shrewd, bawdy trader Bloody Mary. While both characters finally come to their senses, only Nellie is reunited with her lover. Joe dies aiding the American war effort against the Japanese. 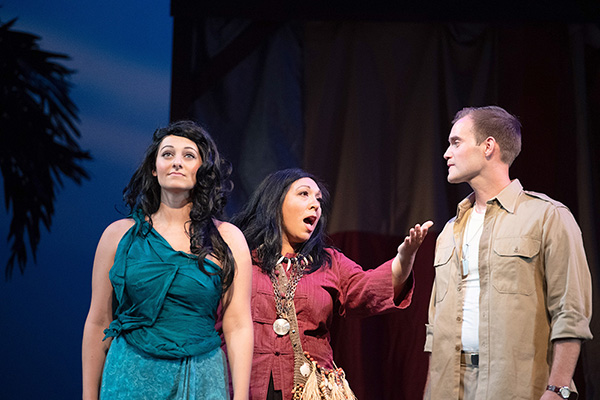 Though the music is so good, and all the successful elements of musical comedy are present, the show still has its problems with racial stereotypes. All that said, OLO’s production of this classic was delightfully genuine, earning plenty of laughs and sobs. The Festival Orchestra under music director J. Lynn Thompson, who easily molded Rodgers’s gorgeous music, sounded wonderful. Daniel Hobbs’s evocative and modular sets created a tropical mood and enabled fast set changes, while Anne Medlock’s costumes were spot-on ‘40s garb.

Soprano Jocelyn Hansen brought a clarion voice and an endearing confusion to Nellie as her emotions rose and fell, even though her accent regularly disappeared. Each of her solo numbers from “A Cockeyed Optimist” to her slightly intoxicated “I’m in Love with a Wonderful Guy” were a treat.

Bass-baritone Brad Baron was an imposing Emile with a full-bodied, deep voice who handled each of his “Some Enchanted Evenings” movingly, but his show stopper was his emotionally devastated “This Nearly Was Mine.” The fresh-faced baritone Benjamin Dutton was perfect for Joe, exuding an easy confidence blown over by unexpected love. His fantastic diction and wrenching emotions were exactly right for “You’ve Got to Be Carefully Taught.” 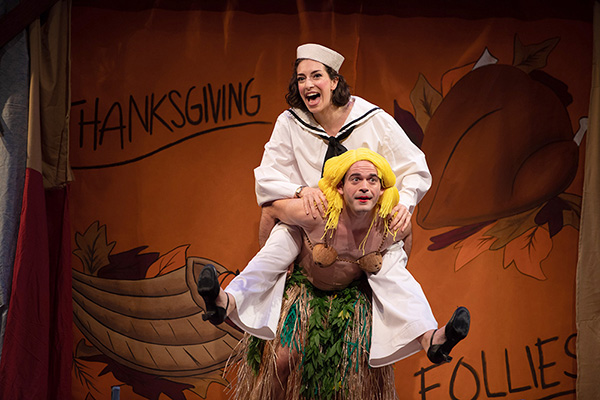 Among the secondary cast, powerful soprano Michelle Pedersen’s Bloody Mary was funny yet forthright, while her singing in the alluring “Bali Ha’i” and the joyous “Happy Talk” was impeccable. Baritone Kyle Lampuro’s Luther Billis was a great comedic foil for Nellie, and his grass-skirt dancing in “Honey Bun” was uproarious. Ted Christopher and Vincent Gover were both imposing and silly as Captain Brackett and Commander Harbison. And the men and women of the ensemble were fantastic in the singing and dancing chorus numbers.

Photos: Ohio Light Opera (images may not show actors mentioned in the review).

END_OF_DOCUMENT_TOKEN_TO_BE_REPLACED

Then, you heard all the qualities that make for a stunning soloist. Winner of the 2013 Cleveland International Piano Competition, Khristenko was back in town this month for a recital in Piano Cleveland’s summer series, Piano Days @CLE. And he couldn’t help but revel in the spotlight a little, even as he settled into a more collaborative role at the keyboard for his program, “Stanislav and Friends.” END_OF_DOCUMENT_TOKEN_TO_BE_REPLACED