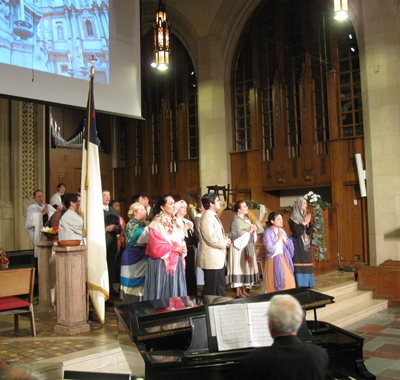 In just over an hour, betrayal and jealousy in a Sicilian village spill over into tragedy in Pietro Mascagni’s one-act classic opera, Cavalleria rusticana — all the while accompanied by some gorgeous music. Opera Circle staged two performances of “Cav” last weekend at First Baptist Church in Shaker Heights. I saw the opening performance on Friday evening, November 21.

This was a production that made no attempt to convert a gothic church into a theater. There were no sets and no scenery beyond the tables and chairs needed to suggest a wine shop, and the lighting was ambient. A large screen projected supertitles, images of the Sicilian countryside, a baroque church façade and various other graphics suggesting interiors or — at one point — showing the hindquarters of a horse both still and in motion. And Mascagni’s orchestration was reduced to violin, cello and piano.

There’s nothing wrong with doing opera productions on a shoestring, so long as you have a strong cast of singers — because opera is all about the singing. Happily, Opera Circle fielded a group of five fine vocalists for this production. 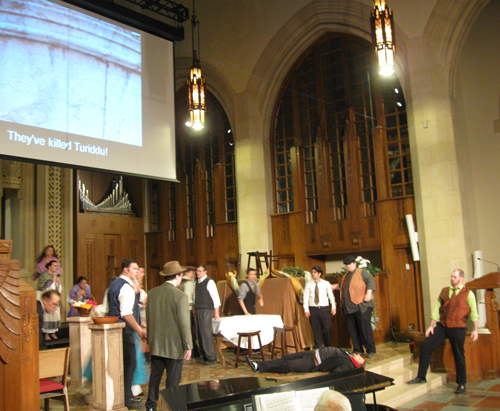 Russian tenor Mikhail Urusov was a standout as Turiddu. His stentorian voice and dramatic stage presence carried well in the cavernous nave. As Santuzza, Rachel Morrison displayed the vocal power and clarity to stand up well to Urusov, though her characterization of Turiddu’s jilted sweetheart didn’t come across quite as effectively to the audience.

Bass-baritone Christopher Aldrich, the cast member with the shortest brag sheet, made a riveting Alfio. His wife, Lola, was captivatingly played by mezzo-soprano Katie Fowler, lovely of voice and every inch a charmer. Opera Circle veteran Laura Avdey skillfully captured the character of Mama Lucia. 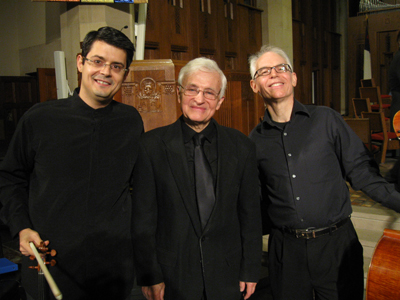 Recapitulating their role in Opera Circle’s 2011 chamber production of Werther, violinist Hristo Popov, cellist Kent Collier and pianist Jacek Sobieski covered as much of Mascagni’s orchestra score as a piano trio could humanly be expected to do. Popov played with alluring lyricism and Collier contributed a soulful solo late in the show. Sobieski masterfully filled in the rest of the musical fabric.

The chorus plays a major role in “Cav,” both musically and as the crowd of villagers who throng to church on Easter Sunday, move on to the wine shop and witness the challenge that leads to the duel between the male leads and to the death of Turiddu. Effectively deployed by stage director Philip Formes, who had a limited amount of space to work with in the chancel of the church, the chorus members became the principal visual focus of the production as well as one of its most important musical elements. 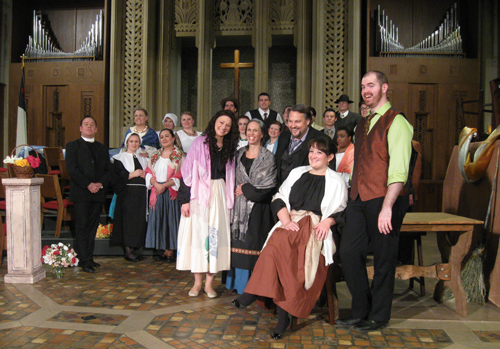 The chorus’s musical role became problematic on Friday evening. This production was frequently unconducted, Sobieski being chiefly occupied with the keyboard and instrumentalists and without having good sightlines of the center stage. As a result, the chorus was often left to its own devices, and the famous Easter Hymn nearly fell apart at several junctures. (It was odd to see Collier leap up at the end to give a cutoff). The drinking scene didn’t fare much better. The ensemble’s sound was good, but the group didn’t have much of a chance of singing as an ensemble.

Surprising innovations included the texting of the big melody in the Intermezzo (Dorota Sobieska stepped out of the chorus and sang it to the words of the Ave Maria) and the staging of Turiddu’s stabbing in full sight (the synopsis and libretto both indicate that the tragedy occurs offstage in an orchard and is reported by shouts from a distance).

Otherwise, Formes’s use of the space was clever — bringing characters in from various entrances including down the center aisle of the nave and suggesting moving inside the church by having the chorus form a wall with their backs to the audience.

The cimbalom was the feature of the show, an instrument capable of taking on many personas. Its performer, Chester Englander, has shaped his career around the instrument, and has inspired composers to write more repertoire for it, some of which was presented on the program. END_OF_DOCUMENT_TOKEN_TO_BE_REPLACED

You wouldn’t expect that acoustic from a glance at the nave, which is wide and long, but not especially lofty. But when I guest conducted a local amateur choir and professional orchestra in Beethoven’s Mass in C there a few years back, during the first rehearsal we released the final chord of the “Gloria” and listened in astonishment for the next several seconds. The sound continued to roll down the space like the big wave that surfers dream about. END_OF_DOCUMENT_TOKEN_TO_BE_REPLACED