“I’m always pushing for people to give opera a chance. And if they do, they’ll discover that it’s probably not what they thought it would be,” the always enthusiastic Scott Skiba said during a telephone conversation. “If you’ve never before been to an opera, this is the perfect opportunity to take the plunge. If you are a seasoned operatic veteran, this production and atmosphere will challenge and delight. In what other setting can you hear live new opera about vampires performed by local professional artists, while sipping your favorite beverage, in costume on Halloween or All Saints Day — then interact with the creators of the work, the performers and fellow opera goers in a post-production reception?”

On October 31 and November 1 at 7:00pm in the James Levine Theatre at Cleveland Public Theatre, Opera Per Tutti will present the Cleveland Premiere of Clarimonde, a new opera by composer Frédéric Chaslin and librettist P.H. Fisher. The performances are a co-production with Cleveland Public Theater and in collaboration with On Site Opera of New York City. Audiences are encouraged to come in costume. Each performance will be followed by a meet and greet discussion about the new work with the composer, librettist, cast, and director. Both evenings also include a cocktail party with cash bar.

How did this unique collaboration come about? “Just by accident,” said Skiba, Opera Per Tutti’s artistic director. “I was talking to Eric Einhorn, artistic director of On Site Opera, and he told me about their Clarimonde project. The two of us had been talking for a few years about sharing a production, and I began to think this would fit into our Halloween dates really well.” The Cleveland production of the opera follows this past August’s world-premiere developmental workshop, presented in a co-production between On Site Opera and The Phoenicia International Festival of the Voice. “During that workshop they discovered a few things — Act II was reworked and significantly re-ordered, and some words were changed here and there. So we’re bringing those changes to Cleveland.” The Cleveland performances will be presented in a concert version with piano, but the singers will be in costume.

The performances also will inaugurate the debut of OPT’s Opera Nuova {New Opera} Series, which will feature a new or newer work of opera theater each season during the fall. “We’ve been trying to get the series off the ground, so this provided us with a lot of great opportunities. It also seemed to be the perfect piece that we could present in an intimate concert version.”

The opera is an adaptation of Théophile Gautier’s novella La Morte Amoureuse (1836), which predates Bram Stoker’s Dracula by 6 years in the genre of the conte fantastique, where science fiction, fantasy and magic realism merge.  Clarimonde is a classic tale of the supernatural, in which a young, handsome priest, Romualdo, is tempted to abandon the priesthood by the sensual vampiress Clarimonde.  Romualado’s mentor, the tough and wise Bishop Serapion, guesses what is transpiring, and he wages a battle to save not only Romualdo’s physical life, but also his very soul.  The cunning Vampire Maker, who took Clarimonde into his care when she was a young girl, conspires to thwart the Bishop’s interference and help Clarimonde in seducing Romualdo and winning his soul. 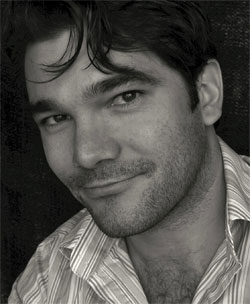 Skiba finds the opera to be very accessible, with an eclectic musical language. In his composer notes, Frédéric Chaslin points out that his idea was to “explore the multi-stylistic language that I believe to be the signature of our time in every domain.

Using a ‘baroque orchestra’—string, woodwinds, harpsichord and harp—and having it play in harmonically different styles like pop that are obviously posterior to the baroque era, a musical distortion is created that is equivalent to that of Gautier’s story… Since the idea of vampires has become extremely popular among the younger generation, I could not think of a better way to resonate with them than to mix and blend those various elements into one original language.”

What is it about vampire tales? “I think there is something inherently sexy about vampires,” Skiba responds quickly. “The giving over of oneself — being bitten on the neck is like a sexual act. You have eternal life, but it comes with a cost. There is something alluring and beguiling. Maybe it’s the same reasons that people are attracted to the Mafia. It’s dark and forbidden. So I encourage people to come and experience opera in a way they probably never imagined — and enjoy a great costume party as well.”

END_OF_DOCUMENT_TOKEN_TO_BE_REPLACED

The Orpheus myth inspired French Baroque composers Jean-Philippe Rameau and Philippe Courbois to write expressive solo cantatas about the famous Greek musician-poet and his futile attempts — because of his own impatience — to rescue his beloved Eurydice from the grasp of Pluto in the Underworld. These are beautifully performed by the clear-voiced soprano Hannah De Priest and the velvet-throated baritone Jonathan Woody (who makes a walk-on appearance in the Rameau). END_OF_DOCUMENT_TOKEN_TO_BE_REPLACED

Now that live concerts are beginning to proliferate, it was delightful to hear Oberlin cello professor Darrett Adkins ring a change on the solo suite format with his Hypersuite No. 3 on September 28 in the Cirigliano Studio Theatre at Lorain County Community College. His program opened the new season of Signature Series performances in Elyria, and was dedicated to the memory of Eva Hornyak. END_OF_DOCUMENT_TOKEN_TO_BE_REPLACED