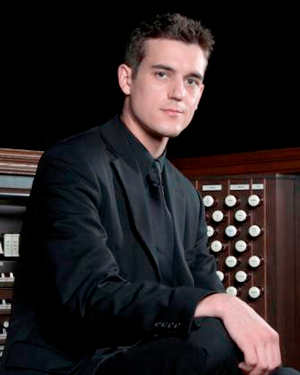 The young British organist David Baskeyfield played a challenging recital program on Sunday afternoon, March 13, at Fairmount Presbyterian Church in Cleveland Heights. Baskeyfield was the winner of the 2014 Canadian International Organ Competition, as well as several other contests. He now lives in Rochester, New York, where he recently completed work on a doctorate in organ and improvisation at Eastman. He demonstrated fluent technique and generally strong musicianship, but still has room to grow as a concert artist.

Baskeyfield’s program included several very familiar major works from the standard repertoire: Johann Sebastian Bach’s Prelude and Fugue in a, BWV 543, Marcel Dupré’s Prelude and Fugue in g, op. 7, no. 3, and Franz Liszt’s Prelude and Fugue on BACH. In the Bach, Baskeyfield showed a fine sense of line and destination. Unlike some performers, he maintained more or less the same registration from the beginning of the prelude to the end of the fugue, enabling a strong sense of connection between the two pieces.

Dupré’s prelude and fugue is a virtuoso showpiece, and Baskeyfield showed off his ability to sail through zillions of notes. The ending was played on full organ, including a trumpet stop loud enough to do permanent hearing damage.

The Liszt prelude and fugue  – based on the German musical spelling of Bach’s name: B-flat, A, C, B-natural –  is, like many of Liszt’s extended works, rhapsodic and very sectional. Making it all hang together is key to its success. Baskeyfield closed the concert with the Liszt, and while he definitely has the technique and temperament to play it, his performance seemed tentative and a bit unfinished. Toward the end he had a significant memory lapse. The music never stopped and he soon got back into the flow, but one questioned whether the piece was quite ready for this outing.

It was in repertoire a bit further off the beaten track that David Baskeyfield really showed his talent. He played two works by Wolfgang Amadè Mozart, first the Adagio and Allegro in F, K. 594, which showed the beautiful flute stops of the church’s large Schantz organ. The Allegro was a perky march featuring even more flutes, and the zimbelstern (a novelty stop on the organ with several small bells that are struck by a small hammer in rotation) even made a brief appearance, jangling in the background. The music from the opening Adagio makes a return at the end. It was all very charming.

The other Mozart work, the Adagio and Fugue in C, K. 546, was originally a piano duet. On Sunday, we heard the version that French organist and composer Jean Guillou transcribed in his own over-the-top style. Baskeyfield played it for all it was worth. With a blazing full-organ beginning, sharply dotted rhythms, and a fugue full of complicated counterpoint and more than a few pedal trills, the organist made the theatrics of the piece as successful as the musical performance. (The audience could watch his fancy pedalling projected on a large screen at the front of the church.)

Camille Saint-Saëns’s Fantaisie in D-flat overflowed with Romantic melodies and colorful registrations. It was a pleasant break (although not technically simple) from the big works by Mozart and Dupré that surrounded it.

Louis Vierne’s Impromptu, from his third suite of Pièces de Fantaisie, op. 54, is a scherzo on flute stops swirling in perpetual motion. Baskeyfield created effective echo effects between the main organ in the back gallery and the smaller chancel organ at the front of the sanctuary.

David Baskeyfield made his strongest impression of the afternoon in a stunning performance of French composer André Isoir’s austere but arresting Variations sur un Psaume Huguenot. The tune, Psalm 92 from the 1652 Genevan Psalter, is first heard in a straightforward harmonization. Later variations become more dissonant, as various contrapuntal devices increasingly obscure the tune, and there are some fiendish technical challenges along the way. The last variation includes fanfares based on fragments of the tune and a toccata in which the melody is heard in long notes in the pedals. The complexity builds to a monumental chordal harmonization of  the psalm melody on full organ.

David Baskeyfield has completely mastered the Isoir piece. When he is able to convince the listener that every work on his program is similarly thrilling – and he has that potential – he will be an artist to be compared with the best.