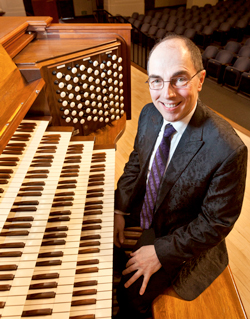 At that time, Higgs told the Youngstown Vindicator, “It’s one of the finest examples of organs built in the 1920s by Ernest Skinner. Skinner was the Rolls-Royce of organ builders, and Stambaugh’s was built in the American symphonic style.” (September 15, 2011).

On Sunday, Higgs will put the instrument through its paces in a program that begins with Johann Sebastian Bach and ends with Franz Liszt, with interesting and rare music by American, British and French composers in between. “I’m trying to play some things that aren’t heard every day on that organ,” he said in a recent telephone conversation from his studio in Rochester, New York.

One such work is Stephen Kennedy’s Alternanza. “It’s only about four minutes long. Steve wrote it for me for a concert in Italy on a romantic organ that was really like an early Wurlitzer. But it just uses normal organ sounds, with undulating harmony underneath in a minimalist style. It’s really hypnotic.” Kennedy, who is Higgs’s partner, will be in attendance on Sunday.

Then there’s Percy Whitlock’s “Scherzetto” from the Sonata in C. “The whole Sonata is a long piece and difficult to program, although I’ve had some students who’ve played the whole thing,” Higgs said. “Whitlock, who died very young, was also a cinema organist who played silent movie accompaniments. He was one of the earliest organists who straddled the line between classical and popular music on the instrument.” 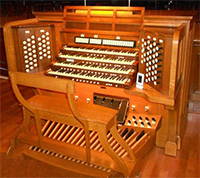 Several of the works on Higgs’s program have Ohio connections, including Paul Creston’s Fantasia, op. 74, which was commissioned by the Cleveland Chapter of the American Guild of Organists on the occasion of its 50th anniversary. “I might be the only living person who plays this piece,” Higgs said, “though every marimba player and saxophonist knows his music. Creston played organ at the Actors’ Chapel in New York for some 40 years. I won the Paul Creston award from the Chapel so I thought I should play a piece of his in the award recital. It’s very rhythmic and full of jazzy-sounding ninth and eleventh chords. It’s one step further than Leo Sowerby in its harmonic language.”

Speaking of Sowerby, Higgs will also play the late Chicago composer’s Comes Autumn Time. “Sowerby is coming back into fashion,” Higgs said. “A lot of people play his music now — just like Karg-Elert is being played in Germany after being pooh-poohed for decades. I recorded Comes Autumn Time a while ago at Riverside Church in New York.” Sowerby was a regular faculty member at the Wa-Li-Ro summer choir camp at Put-in-Bay, Ohio, where he collapsed and died in 1968.

Another Ohio connection is Calvin Hampton’s Five Dances for Organ. Hampton studied at Oberlin before making a distinguished career in New York, where he was one of the first of his generation to succumb to AIDS. The composer was a friend and Higgs has a particularly close connection to the Dances, of which he’ll play three on Sunday. “Calvin wrote the work for me and I premiered it. It was a commission from the Cleveland organ builder Walter Holtkamp,” Higgs said.

Next-to-last on Higgs’s program is a Scène-Pastorale from 19th century French composer Louis James Alfred Lefébure-Wély’s L’Organiste Moderne, “a typical pastorale with shepherds lounging in the fields, a thunderstorm, and the singing of the Ave Maria after the storm with church bells, shawms and pipes.”

Higgs will end with Liszt’s Präludium und Fuge über B-A-C-H, based on the four-note pattern that spells out the composer’s name in German pitches. “I’m going to be playing it somewhat in the style of Karl Straube,” Higgs said, referring to the organist who made a career playing and editing the music of Max Reger. “A bit more orchestrated, and not exactly the way Liszt wrote it, but with a few twists to register it more colorfully for an American organ of the Skinner period. I think Liszt would approve because he expected the performer to interpolate his own material. He said he knew that the audience liked it!”

David Higgs has been busy preparing his Stambaugh program while teaching some 18 organ students and preparing three organ concertos to play in Rochester soon after his Youngstown appearance. “There’s a lot going on here,” he said, “with wonderful students and faculty. We’re having a ball, although it takes up most of my waking hours.” One thing Higgs didn’t have to deal with was all the complications a church organist experiences during the week before Easter. “I haven’t had a regular church job for years,” he said. “It feels a little weird, but the great thing is that I can still get my fix by playing at Christ Church in Rochester on Christmas and Easter.”

END_OF_DOCUMENT_TOKEN_TO_BE_REPLACED

Rodgers & Hammerstein’s Cinderella was originally produced for television in 1957 — seven years after the animated Disney film was released — and starred Julie Andrews. According to the Rodgers & Hammerstein website, it was viewed by over 100 million people. END_OF_DOCUMENT_TOKEN_TO_BE_REPLACED

The story line has its origin in an 1855 play and an 1842 farce that Thornton Wilder mined for his 1938 play The Merchant of Yonkers. When that turned out to be a flop, in 1954 Wilder made the crucial decision to re-center the show around the character of the legendary marriage broker Dolly Gallagher Levi and renamed it The Matchmaker. END_OF_DOCUMENT_TOKEN_TO_BE_REPLACED

The Dodero Center for the Performing Arts at the Gilmore Academy in Gates Mills is one feature of an impressive campus. The auditorium is shallow, the stage is deep, and the ensemble played without a shell. Throughout the program, the sound, especially in instruments’ lower registers, tended to disappear. END_OF_DOCUMENT_TOKEN_TO_BE_REPLACED