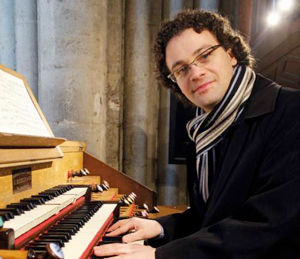 The first of two free Sunday afternoon recitals on the McMyler Organ in Gartner Auditorium at the Cleveland Museum of Art will feature French organist Jean-Baptiste Monnot on November 13 at 2:00 pm. Monnot, who will be making his Cleveland debut this week, is organist of the famous Cavaille-Cöll instrument in the Church of St. Ouen in Rouen.

Monnot will play a program titled “Russian Fireworks,” entirely devoted to transcriptions, including Jean Gillou’s adaptations for the organ of Sergei Prokofiev’s Toccata, Op. 11, Pyotr Tchaikovsky’s Scherzo from Symphony No. 6, and Modest Mussorgsky’s Pictures at an Exhibition, as well as Monnot’s own reworkings of Alexander Scriabin’s Etude No. 1, Op. 2 and Prélude No. 2, Op. 11.

After earning first prizes and a master’s degree at the Paris Conservatory, where he studied with Olivier Latry and Michel Bouvard, Monnot served for ten years as assistant to Jean Guillou at the Church of St-Eustache in Paris. Because of his travel schedule, the organist wasn’t available for an interview, but he graciously agreed to answer some questions by email.

Daniel Hathaway: You were assistant to Jean Guillou, who is a very interesting and controversial figure. What did you learn from him, and what was one of your most interesting experiences?

Jean-Baptiste Monnot: Jean Guillou is a man driven by an inexorable creative force. His teaching invites us to put new insights into the works we play. This enables new aspects of the music to be revealed every time, partly by using all the different coloristic resources of the organ. 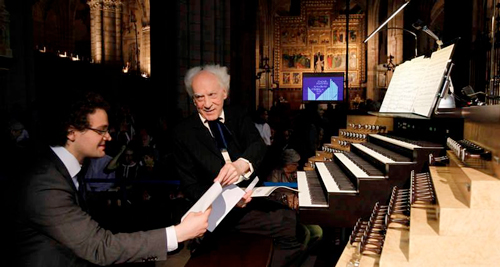 An experience that had great significance for me was the premiere of the music for the play Macbeth by Shakespeare that Jean Guillou composed for Japanese Noh Theater. This gave me the opportunity to work closely with him and better understand his approach to the piece in preparation for the Kyoto and Nagoya performances.

DH: Did Guillou’s approach to transcriptions influence your own arrangements for the organ?

J-BM: I don’t know whether I have been influenced by Jean Guillou’s transcriptions. I have searched for musical textures on the organ that preserve all the dramatic and lyrical intensity of Scriabin’s music.

DH: What are your regular responsibilities as titulaire of St-Ouen?

J-BM: My mission as the titular organist at St-Ouen is to look after two essential elements: the preservation of the instrument and the musical life around it. Needless to say, this organ requires special attention to preserve its historical integrity. I’m now working to build national and international links for the purpose of sharing with other musicians the musical experience this instrument can offer.

DH: You have proposed a very interesting program for the Cleveland Museum of Art. How did you decide to choose transcriptions of Russian piano and orchestral works?

J-BM: Since an early age I have been interested in Russian music, Alexander Scriabin in particular. It’s important, however, to be aware that not every work can be transcribed for another instrument. The organ can certainly be used as an orchestra, and the textural richness of both the piano and orchestral Russian works is particularly inviting for organ transcriptions in a “symphonic” sense. It’s interesting that none of the Russian composers I’m playing wrote for the organ. Therefore, it’s a great opportunity to bring the Russian compositional language to the organ world. 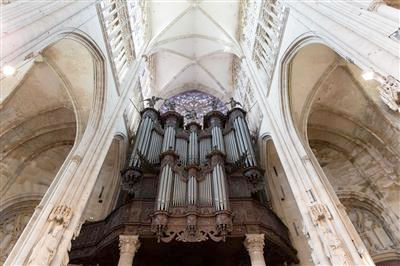 DH: In Rouen, you play one of Aristide Cavaillé-Coll’s late masterpieces with an abundance of 16- and 8-foot registers. How will you have to change your approach to registration for a neo-Baroque instrument like the Holtkamp at the Cleveland Museum?

J-BM: The uniqueness of each instrument is what makes the organ so fascinating. This diversity has always appealed to me as a musician, because it invites you to rethink the sound texture and your interpretive vision on that particular instrument. It’s intensive listening that enables us to employ the instrument at the service of the music.

Unlike some other MasterWorks concerts by the Canton Symphony Orchestra, there was no single, dominant musical theme or concept uniting the selections on its February 16 program. There certainly was, however, a unifying energy working from the podium — CSO Assistant Conductor Matthew Jenkins Jaroszewicz. END_OF_DOCUMENT_TOKEN_TO_BE_REPLACED

The history of classical music sometimes borders on mythology. The music on the Akron Symphony’s Saturday, February 22 program has taken on this fabled, quasi-historical quality — Mozart’s Requiem, Schubert’s “Unfinished” Symphony, and Beethoven’s over-finished Leonore Overture No. 3. Fortunately, in performance the music more than lived up to the story. END_OF_DOCUMENT_TOKEN_TO_BE_REPLACED

Cleveland’s Baroque Orchestra celebrated the Valentine’s Day weekend with four performances of “L’Amore: An Old Italian Valentine.” I heard the second concert on the evening of Valentine’s Day itself at St. Paul’s Episcopal Church in Cleveland Heights. Apollo’s Fire conductor and harpsichordist Jeannette Sorrell greeted the audience with the adage, “Italian is the language of music, of the angels, and of love.” END_OF_DOCUMENT_TOKEN_TO_BE_REPLACED

Every so often, the first seconds of a concert bring neither anxiety over how the rest will go nor twitchy overstimulation, neither boredom nor ecstasy, but a satisfying assurance. Some performances click right away, the musicians’ technique unimpeachable, their artistry and expression powerful, their manner warm but professional. Such concerts hold attention in a special way — the chances of a misstep negligible enough that listening never involves comparison to an abstract standard. In the Phaeton Trio’s recent tour de force in Rocky River, the initial gestures of the performance set a high standard that held throughout. END_OF_DOCUMENT_TOKEN_TO_BE_REPLACED

Musicians love a good metaphor: take, for instance, that of summiting a mountain. When a violinist speaks this way after playing all of Bach’s partitas, or a soprano recalls preparations for a Wagner opera, the image of the artist mounting some hostile peak offers implications of persistence, struggle, and of course triumph. Pianists might describe Beethoven’s sonatas this way. But how many have actually played at the top of a mountain? Archival video confirms that French pianist Pierre Réach literalized this image of the soloist at the summit over twenty years ago. A recent concert in Cleveland confirmed that the figurative Everest of Beethoven’s piano music still bears his banner as well. END_OF_DOCUMENT_TOKEN_TO_BE_REPLACED