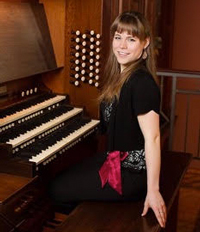 Oberlin graduate Katelyn Emerson showed impressive technical facility and musicianship in her first Cleveland recital since winning First Prize in the American Guild of Organists National Young Artists Competition. The November 15 concert at the Cathedral of St. John the Evangelist was co-sponsored by the Cathedral and the Cleveland Chapter of the AGO.

Emerson opened her program with J.S. Bach’s Prelude and Fugue in G, BWV 541. She chose a brisk tempo and a middle-of-the-road style of articulation for its manual flourishes and jolly fugue theme that worked well on the mid–20th century Holtkamp organ.

Next came two contrasting movements from Robert Schumann’s Six Fugues on BACH, based on the German notes that spell Bach’s name, and written for the Pedalflügel, a grand piano with an organ-style pedal board. In No. 1, her performance was dignified, beginning with basic foundation stops and gradually building to a climax. The piece ended as it began. As admirable as Emerson’s performance was, the music needed more flexibility of phrasing and rhythm to emphasize its vocal quality. The scherzo-like No. 6 was charming, and the organist managed its highly-articulated theme and tricky counterpoint with ease.

Jean Langlais’ “Thème et variations” is part of a tribute to Italian Baroque composer Girolamo  Frescobaldi. The theme is chorale-like, but written in Langlais’ distinctive style of altered, sometimes astringent modal harmonies. Several variations in diverse styles follow, including a duo on contrasting registrations, a variation exploiting the flute stops, and a scherzo with sparkling arpeggiated flourishes.

Langlais’ widow, Marie-Louise Langlais, was one of Emerson’s teachers and a special guest for the concert. Mme. Langlais is the leading exponent of her late husband’s works, so Emerson’s fluent performance was likely authoritative.

Mozart’s Fantasie in f, K. 608, written for a small flute organ attached to a mechanical clock, closed the first half. It is hard to imagine hearing the sharply articulated opening chords and counterpoint of this monumental work played on such a device. A gentle, melodic section fills the center of the work, ending with a fugal development of the opening themes.

Emerson tossed off the opening and closing sections easily, without emphasizing the drama of the work. She registered the central section imaginatively with dialogue between the gallery organ and the smaller chancel organ, but her very brisk tempo did not give much opportunity for the music’s lyricism to expand.

The second half of the program featured excerpts from major works, beginning with the opening movement of Charles-Marie Widor’s Symphony No. 6, a set of variations on a majestic march-like chorale in which technical brilliance trumps all else. Emerson’s performance was thrilling from beginning to end.

The Cathedral’s organ is particularly suited for French Romantic music, and with its impressionist harmonies and lush string sounds, Maurice’s Duruflé’s “Sicilienne” from the Suite, Op. 5, sounded splendid. A memorable passage toward the end places the melody in the pedal on the mysterious, reedy voix humaine stop against undulating chords in the hands. This was one of the best performances on the program.

Emerson also gave an astonishing reading of Louis Vierne’s Naïades (“Water nymphs”) from his Pièces de fantaisie, Op. 55. An unending stream of sixteenth notes on soft flute registers in counterpoint with a gentle melody on string stops, the piece is unrelentingly transparent. Any flaw is immediately audible. Had the organist played nothing else but Naïades, it would still have been worth attending the concert.

Emerson ended the program with the craggy Prelude from Marcel Dupré’s Symphony II. Here, Dupré’s music is at its most jagged and dissonant — surprising in its modernism, and episodic, with many short, fragmented themes assembled, developed, and reassembled. Emerson gave it an impressive reading — an aggressive closing to a program of large works.

END_OF_DOCUMENT_TOKEN_TO_BE_REPLACED

Rodgers & Hammerstein’s Cinderella was originally produced for television in 1957 — seven years after the animated Disney film was released — and starred Julie Andrews. According to the Rodgers & Hammerstein website, it was viewed by over 100 million people. END_OF_DOCUMENT_TOKEN_TO_BE_REPLACED

The story line has its origin in an 1855 play and an 1842 farce that Thornton Wilder mined for his 1938 play The Merchant of Yonkers. When that turned out to be a flop, in 1954 Wilder made the crucial decision to re-center the show around the character of the legendary marriage broker Dolly Gallagher Levi and renamed it The Matchmaker. END_OF_DOCUMENT_TOKEN_TO_BE_REPLACED

The Dodero Center for the Performing Arts at the Gilmore Academy in Gates Mills is one feature of an impressive campus. The auditorium is shallow, the stage is deep, and the ensemble played without a shell. Throughout the program, the sound, especially in instruments’ lower registers, tended to disappear. END_OF_DOCUMENT_TOKEN_TO_BE_REPLACED