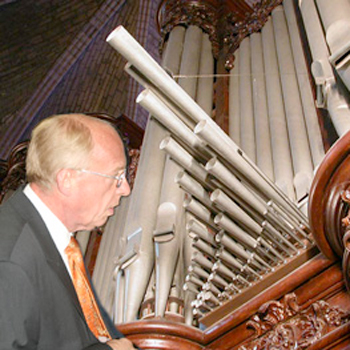 Philippe Lefebvre, one of three tenured organists (titulaires) at the Cathedral of Notre-Dame in Paris, made his impressive Oberlin debut on Wednesday, September 16 in a 70-minute, straight-through recital in Finney Chapel at Oberlin College. His program paid homage to the great bloodline of French organist-composers established by the Belgian-born master César Franck, as well as to the long and distinguished tradition of improvisation that continues to live and prosper in the organ galleries of France.

Expertly matching his repertoire to the resources of the, 76-rank French romantic organ built by C.B. Fisk of Gloucester, Massachusetts in 2001, Lefebvre chose music by Franck himself, by Franck’s student Charles Tournemire, by Claude Debussy, who also studied with Franck, and by Marcel Dupré, a pupil of Charles-Marie Widor, who succeeded Franck at the Paris Conservatory. Lefebvre, who studied with his Notre-Dame predecessor Pierre Cochereau — who in turn studied with Dupré — ended his recital with an extended improvisation on a given theme.

César Franck wrote his Trois Pièces pour le Grand Orgue in the two-week period preceding his important recital on the new Cavaillé-Coll organ at the Trocadero in Paris in October of 1878. For that occasion, Franck interleaved his own improvisations between the three individual works. On Wednesday, Lefebvre opened his recital by playing the three pieces end to end, creating a sort of suite.

The Fantasie en la majeur is often mentioned by Franck’s contemporaries as the written-down work that comes closest to one of his improvisations. Rhapsodic and poetic in nature, Lefebvre graced it with a varied palette of colors. In the constantly-modulating Cantabile, he chose mellow reed stops for the solo line, which moves back and forth between the soprano and tenor register. He drew noble, quasi-military sounds from the organ for parts of the Pièce Hérôique, choosing more orchestral colors for interludes that evoked strings, harp, and wind solos. The blaze of the Fisk’s reed stops crowned the triumphal coda. In all three pieces, Lefebvre managed tricky finger-work with cool ease, although his tendency to massage tempos in the third work gave the Piece Heroîque an overly episodic quality. 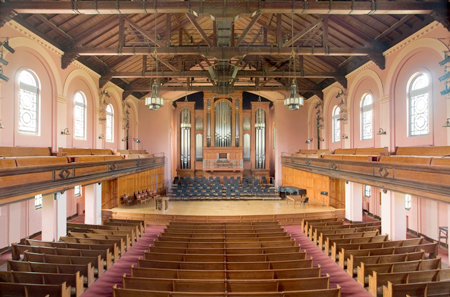 Maurice Duruflé, one of Charles Tournemire’s students, took on the daunting task of transcribing five of his mentor’s improvisations from phonograph recordings. The Fantaisie-Improvisation sur l’Ave Maris Stella gave both Lefebvre and the organ an energetic workout — and the audience the opportunity to hear a master improviser of the past channelled by a living artist. The Gregorian chant tune is striking in its melodic profile, but Tournemire seemed to be most intrigued by the ends of two of its phrases. Lefebvre gave the often wild-sounding work a vibrant performance.

Lefebvre followed the Tournemire with his own arrangement of Debussy’s affecting Clair de lune, choosing diaphanous registrations and skillfully simulating piano arpeggiations. His performance of Dupré’s Cortège et Litanie explored the softest and loudest registers of the organ as the imagined funeral procession wound on inexorably to a triumphant conclusion — but not always with a completely steady pulse.

Oberlin organ professor James David Christie announced at the beginning of the recital that the theme for Philippe Lefebvre’s concluding improvisation would be the famous, four-note B-A-C-H motto (B-flat, A, C, B-natural), a bit of musical DNA that can lead to some very interesting harmonic implications.

Lefebvre began with other-worldly clusters on high-pitched stops. As he warmed to his subject, his musical invention gradually built the music to a climax, then to a new beginning. A dense tangle of meandering counterpoint gradually crept upward, gathering strength as it rose to culminate in a final statement drawing on all the organ’s power. In between, Lefebvre explored a wide range of styles and textures that produced some dazzling effects. Intriguing, but at nearly 25 minutes in length, a bit too much of a good thing.

At the end, Philippe Lefebvre first took his own bow, then gestured toward his partner, the organ. The two had been through a lot together in the past seventy minutes, and he genuinely seemed to love what the Fisk enabled him to do.

END_OF_DOCUMENT_TOKEN_TO_BE_REPLACED

Rodgers & Hammerstein’s Cinderella was originally produced for television in 1957 — seven years after the animated Disney film was released — and starred Julie Andrews. According to the Rodgers & Hammerstein website, it was viewed by over 100 million people. END_OF_DOCUMENT_TOKEN_TO_BE_REPLACED

The story line has its origin in an 1855 play and an 1842 farce that Thornton Wilder mined for his 1938 play The Merchant of Yonkers. When that turned out to be a flop, in 1954 Wilder made the crucial decision to re-center the show around the character of the legendary marriage broker Dolly Gallagher Levi and renamed it The Matchmaker. END_OF_DOCUMENT_TOKEN_TO_BE_REPLACED

The Dodero Center for the Performing Arts at the Gilmore Academy in Gates Mills is one feature of an impressive campus. The auditorium is shallow, the stage is deep, and the ensemble played without a shell. Throughout the program, the sound, especially in instruments’ lower registers, tended to disappear. END_OF_DOCUMENT_TOKEN_TO_BE_REPLACED