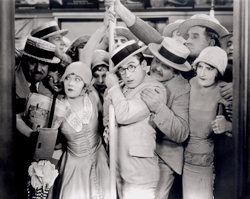 Well-known concert organist Todd Wilson will explore another side of his art this month when he improvises musical scores to two silent film classics at Stambaugh Auditorium in Youngstown and Severance Hall in Cleveland. Speedy, Harold Lloyd’s 1928 Paramount film, which chronicles the attempts of Harold “Speedy” Swift to save the last horse-drawn streetcar in New York (with a cameo appearance by Babe Ruth) will be screened at Stambaugh on Sunday, October 19 at 4:00 pm. Then the 1925 silent version of Phantom of the Opera, starring Lon Chaney, will be shown at Severance Hall on Tuesday, October 28 at 7:30 pm. Phantom is part of this season’s Cleveland Orchestra’s Celebrity Series, but Wilson will be the only musician on stage for the occasion.

How did Todd Wilson and silent film cross paths? “It started at the Church of the Covenant when I first went there,” Wilson said in a telephone conversation. “I thought it would be nice to have a summer music series because there wasn’t much going on then in University Circle. I thought about what would get people to come out on a summer evening — something popular, fun and different. It worked, and I enjoyed it. I realized right away that it represented a completely different kind of organ playing, one that was challenging and fun, drew crowds and entertained people.”

Wilson, who is currently director of music at Trinity Cathedral, house organist at Stan Hywet in Akron, and curator of the organ at Severance Hall — and teaches organ at the Cleveland Institute of Music — seems to have built what was originally a sideline into something of a parallel mini-career. And it’s one he’s really busy with in October.

“This is an unusual month. In addition to Stambaugh and Severance, I’m playing for silent films in Brooklyn and at Davies Symphony Hall in San Francisco.” Brooklyn will be another Phantom, this time in a Catholic church, but San Francisco will take Wilson into the world of Dr. Jekyll and Mr. Hyde. “That’s on Halloween night,” he said. “I did the same show last year in Davies Hall and they must have liked it because they asked me back!” 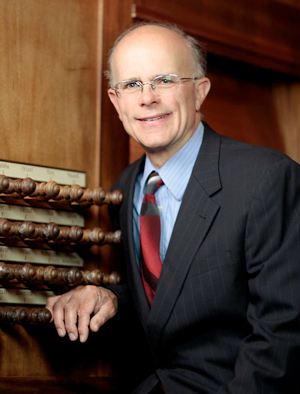 Before 1929, when technology had advanced to the point where films with a sound track began to predominate, musical accompaniment was furnished by live pianists or organists. The theater organ, with numerous bells, whistles and sound effects, soon — but briefly — became the instrument of choice. At Stambaugh and Severance Halls, Wilson won’t have a mighty Wurlitzer at his disposal, but probably the next best thing: two restored E.M. Skinner “orchestral” organs with an array of vibrant tone colors to draw on. “Without a theater organ, you use whatever stops are available, and on these organs the gimmicks are usually only harp and chimes.”

When Wilson prepares to accompany a film, he first sits down and watches it, “ten or twelve times. Then you get to know the sequence and the timing and have a good visual picture of what’s happening. Then I sit down at a piano or organ and start to play with themes. It evolves gradually.”

Like Wagner, Wilson works with Leitmotivs that represent characters or concepts. “For Speedy, I collect New York themes, and baseball themes because Babe Ruth appears in the film. I just throw it all into a pot and see what happens.”

Accompanying the original version of Phantom raises the question of whether Wilson will weave in some tunes from the more recent Broadway show. “I have a hard time with Andrew Lloyd Webber,” he admits. “Compared to Lon Chaney, it all seems too slick. People ask me but I don’t tend to think a lot in that direction.”

Todd Wilson thinks that the art of improvisation is gaining traction in the U.S. “It seems to be making a really happy renaissance. There’s much more attention being given to improvisation in teaching and competitions.” In Wilson’s own case, he discovers students with a talent for improvisation through his service-playing class at CIM. “Some folks have a real knack for it, so we take that ball and run with it.” One of Wilson’s star students was Tom Trenney, who has also become well-known for accompanying silent films.

My final question: does Speedy save the horse-drawn streetcar in the end? Not to spoil the end of the film, but Wilson says he does. “There’s a wonderful scene at the end where a gang of thieves has stolen the streetcar and Speedy finds it and has to get it back by a certain time. The clock is ticking for the last fifteen minutes of the film.” Count on Todd Wilson to provide suspenseful music while the story approaches its climax.

END_OF_DOCUMENT_TOKEN_TO_BE_REPLACED

Rodgers & Hammerstein’s Cinderella was originally produced for television in 1957 — seven years after the animated Disney film was released — and starred Julie Andrews. According to the Rodgers & Hammerstein website, it was viewed by over 100 million people. END_OF_DOCUMENT_TOKEN_TO_BE_REPLACED

The story line has its origin in an 1855 play and an 1842 farce that Thornton Wilder mined for his 1938 play The Merchant of Yonkers. When that turned out to be a flop, in 1954 Wilder made the crucial decision to re-center the show around the character of the legendary marriage broker Dolly Gallagher Levi and renamed it The Matchmaker. END_OF_DOCUMENT_TOKEN_TO_BE_REPLACED

The Dodero Center for the Performing Arts at the Gilmore Academy in Gates Mills is one feature of an impressive campus. The auditorium is shallow, the stage is deep, and the ensemble played without a shell. Throughout the program, the sound, especially in instruments’ lower registers, tended to disappear. END_OF_DOCUMENT_TOKEN_TO_BE_REPLACED