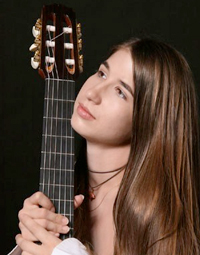 Over the past few years Petra Poláčková has enthralled audiences at the Cleveland International Classical Guitar Festival, and on Sunday afternoon, June 5, at the Cleveland Institute of Music’s Kulas Hall, the young Czech musician demonstrated why she has become a Festival favorite.

Her program, “Canciones,” featured a set of songs by Narvaez, Dowland, Milano, and Cassado, arrangements of Catalan folk songs by Liobet, and six Schubert lieder. And from start to finish the performance had the “wow” factor we have come to expect from Poláčková — her technique was unblemished and her thoughtful interpretations were both reserved and expansive.

Playing on a six-string guitar, Poláčková grabbed the listeners’ attention during her  intimate take on Luys de Narvaez’s Canción del Emperador. John Dowland’s Lacrimae Antiquae was defined by tasteful ornamentation, while she negotiated the fast scale passages of Francesco da Milano’s La Compagna with ease. The most recent piece, Gasper Cassado’s Canción de Leonarda from 1951, added a somewhat modern twist to the set. The work is a touching lament for Segovia’s second son, who was killed in a car accident at a young age, and Poláčková’s performance was simply lovely.

The guitarist was the perfect storyteller during Miguel Liobet’s Seven Catalan Folk Songs. The opening “La nit de Nadal” was playful, while “El testament d’Amèlia,” which tells the story of a young lady who knowingly imbibes a poisoned drink given to her by her stepmother (who has been sleeping with her husband) was haunting.

Poláčková brought a sense of empathy to  “Cançó del lladre,” a sad song about a thief who is sentenced to death, and a Christmas song, “El Noy de la Mare,” brought the set to a tender conclusion.

Switching to a nine-string Romantic guitar for the Six Schubert Lieder arranged by Johann Kasper Mertz, Poláčková produced a deep, colorful sound. Here, the guitarist brought out her inner art-song performer, qualities that were especially effective during Lob der Tränen (In Praise of Tears), the dreamy Liebesbotschaft (Love’s Message), and the emotional Aufenthalt (Resting Place), and Ständchen (Serenade).

The good-sized audience showed their appreciation for Poláčková’s arresting performance with a long ovation which she acknowledged with another Schubert song.

END_OF_DOCUMENT_TOKEN_TO_BE_REPLACED

Supported by engagingly, yet simple staging by Cara Consilvio, a well-prepared cast of singers told the archetypal story of Cinderella with charm and flair. Framing the production was  a sparse but colorful set and wonderful lighting by Dave Brooks. END_OF_DOCUMENT_TOKEN_TO_BE_REPLACED