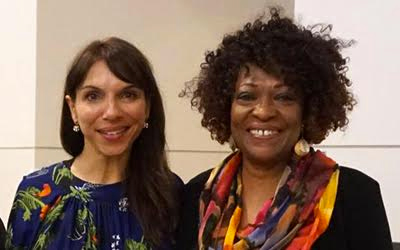 American pianist Lara Downes, a frequent visitor to Northeast Ohio, just completed a four-day stint in Cleveland, Oberlin, and Akron. On Saturday, February 4, she performed and discussed works from her recent CD America Again for an enthusiastic audience in Heiser Auditorium at the Kendal at Oberlin retirement community.

The inspiration for the album comes from the Langston Hughes poem Let America Be America Again (1936), which portrays a troubled America struggling to make the American dream a reality, a struggle that persists for many in the present day:

I am the poor white, fooled and pushed apart,
I am the Negro bearing slavery’s scars.
I am the red man driven from the land,
I am the immigrant clutching the hope I seek —
And finding only the same old stupid plan
Of dog eat dog, of mighty crush the weak.

Downes explores the meaning of “America” in these turbulent times through the lens of her own mixed African American and Eastern European background. She uses the breadth of American music to express the diversity of American history and American dreams — never turning away from the struggles and the pain, yet always seeking the light of hope. In her opening remarks, she explained that she would be playing a variety of music, from traditional to jazz to new pieces, but what they all had in common was that they were American, and that their many differences represent the great diversity of American stories and American music.

Downes began with Morton Gould’s American Caprice, a lively number full of the humor, sass, and luster of 1940s New York. She said that Gould, a contemporary of George Gershwin but less well-known today, was the quintessential DIY American musical success story. Many of her selections for the program were from lesser-known composers, or were less-familiar works by popular composers — such as the works that Duke Ellington wrote for the concert hall and sacred spaces rather than for jazz clubs.

Downes premiered the newest piece on the program, Daniel Bernard Roumain’s I Need to Cry But Can’t, in Harlem on February 1, celebrating Langston Hughes’ birthday and the start of Black History Month. In her introduction to the work on Saturday, she talked about her experiences in 2016 traveling the country and communicating with a wide range of people during and immediately following the election campaign. Although she witnessed a great deal of division, she feels we have more in common than we have differences. In that, she holds hope for the future. The piece is essentially a lament, reaching out for some kind of connection, but finding only the ghosts of lost hopes and dreams denied or deferred. She played it passionately.

Throughout the performance, interesting groupings of pieces highlighted similarities and differences. She played two river songs from the same era, but of substantially different lineage — Samuel Coleridge-Taylor’s arrangements of the spiritual Deep River and the folk song Shenandoah. Another set grouped works evoking an America always on the move –— pioneers, immigrants, hitchhikers. Dan Visconti’s “Nocturne” from Lonesome Roads addresses the travel-weary loner looking for a home. Ernest Bloch’s roiling and turbulent At Sea, composed during his time in Cleveland, portrays the vast ocean voyages people have taken to reach the promise of America. Angelica Negron’s Sueño recurrente speaks to the endless appeal of the American dream of freedom, safety and hope.

In addition to the struggle, Downes finds hopefulness in Hughes’ poem:

Let America be the dream the dreamers dreamed —
Let it be that great strong land of love
Where never kings connive nor tyrants scheme
That any man be crushed by one above.

Such hopes and dreams were well represented by her closing piece, a solo piano version of Ellington’s New World A-Comin’. This gem served as the theme song for a 1944-45 radio show based on a book by African American journalist Roi Ottley. The show presented stories of everyday African American life as wholly American stories in the context of a hope and a dream that post-WWII America would transcend its long history of racial inequality. The music fully captures the aspirations of a people rushing to embrace a new, more just society. As we all know, that struggle continues.

After the concert, Downes spoke to members of the audience and discussed her latest initiative, “My Promise Project.” The program was inspired by a line from Testimonial, a poem by Pulitzer Prize-winner and former U.S. Poet Laureate Rita Dove: “I gave my promise to the world, and the world followed me here.” She asks children she meets around the country what their promise is to the world, inviting them to connect with their own family history: “what did your parents, grandparents, even great grandparents do? How does what they did affect your life? How can you be true to your promise?”

Despite the chaos and uncertainty emanating from Washington, D.C. at the moment, Lara Downes gave this audience the hope to believe that if we all stick together, we can make the final lines of Hughes’ poem a reality:

We, the people, must redeem
The land, the mines, the plants, the rivers.
The mountains and the endless plain —
All, all the stretch of these great green states —
And make America again!

Photo: Downes and Dove at the pianist’s performance the following day at the Akron-Summit County Library.

Jackson began the program with a recitation of Langston Hughes’ poem “Helen Keller” — the first of five poems by Hughes that served as interludes between each piece on the first half. END_OF_DOCUMENT_TOKEN_TO_BE_REPLACED

Pianos with pins and tape on strings, a bass drum and tam tam, crotales, Almglocken, and vibes. Microphones were hooked up all around the instruments. The feed was sent to speakers around the room. Lighting designer Nicholas Houfek hung incandescent globes over the arrangement of instruments from thin black wires stretching across the beams. END_OF_DOCUMENT_TOKEN_TO_BE_REPLACED

From the podium, Elim Chan set an ambitious tone for the evening. The rising star conductor, here in her Cleveland Orchestra debut, has a commanding style, and every twist and turn in Saturday’s performance tracked closely with her baton. END_OF_DOCUMENT_TOKEN_TO_BE_REPLACED