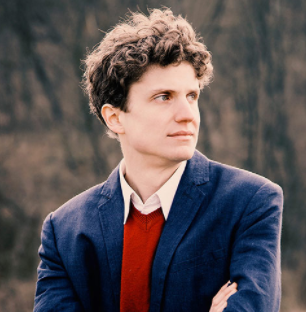 Fresh off his first-prize win at the 2017 Montreal International Musical Competition in May, Hungarian pianist Zoltán Fejérvári will return to North America this week to make his ChamberFest Cleveland debut on Thursday, June 22. “I’m excited about being part of the Festival,” the pianist said by telephone from Hungary. “I know a lot of people who have been, and will be there, and they all have had wonderful things to say about it.”

In addition to his success in Montreal, Zoltán Fejérvári is the 2016 recipient of a Borletti-Buitoni Trust Fellowship. He has given recitals at Carnegie’s Weill Hall, the Kimmel Center, and venues across Europe. As a concerto soloist, the pianist has performed with the Budapest Festival Orchestra, the Hungarian National Orchestra, and at the Verbier Festival. An active chamber musician, he participated in the Marlboro Music Festival during the summers of 2014 through 2016.

During Thursday’s Mixon Hall concert, Fejérvári will join fellow pianist Orion Weiss during Maurice Ravel’s La Valse, in the composer’s own transcription for two pianos. “I’m practicing that right now,” Fejérvári said. “It’s a wonderful arrangement and it works quite well. As with most of Ravel’s music, at first look it seems scary, but his music is very clear and pianistic. It’s always brilliant — you just have to put some hours into it.”

The following evening, June 23, Fejérvári will join his good friend, pianist Roman Rabinovich, for a performance of György Kurtág’s Játékok (“games”), and the composer’s arrangement of J.S. Bach’s Sonatina from Cantata No. 106. “Kurtág composed eight books of Játékok. Two of them are written for piano-four-hands or two pianos, and we’ve chosen pieces from both of those books,” he said. “They are short but full of expression and musical gestures. Some are parodies — one is called “Serious Choral” — in which Kurtág takes Bach and surrounds it with his own musical jokes. That one is particularly faithful to that name Games.”

Fejérvári will be featured in Béla Bartók’s oft-neglected Piano Quintet on Sunday, June 25. Dating from 1903-04, the large-scale work is the composer’s longest piece of chamber music at 45 minutes in length. The pianist noted that his part is 170 pages of music.

“Bartók wrote it when he was very young, and it’s full of musical ideas from the composers of that era. For example, you hear influences of Richard Strauss and Liszt. The finale movement is a very fast dance, practically a csárdás, and in the slow movement you hear Bartók’s attempt to write national music, though it’s not the real folk music he would later use. It doesn’t have an opus number because I don’t think he considered it to be a mature piece.”

Also on the program will be Beethoven’s Op. 1, No. 2 Piano Trio, which Fejérvári said has a very different feel than the Bartók. “I think Beethoven’s early works are exciting, and close to being mature pieces. This Op. 1 Trio and the Op. 2 piano sonatas have a sense of craziness. I think it’s his middle period where he became less crazy.”

On June 26, Fejérvári, along with flutist Demarre McGill and clarinetist Franklin Cohen, will present Guillaume Connesson’s Techno Parade. Born in Boulogne-Billancourt, France in 1970, the composer lists Couperin, Wagner, Debussy, Stravinsky, Reich, John Williams, and the funk style of James Brown as his influences. “It’s right on the border of classical and pop music,” the pianist said. “It’s written very well and is full of exciting harmonies.”

Fejérvári will conclude his ChamberFest performances on Friday, June 30 with Robert Schumann’s Piano Trio No. 3 in g, Op. 110, a work he said needs no introduction. “I play a lot of Schumann, including his Piano Quartet and Quintet. I love those pieces but I think his Trios are on a higher level of composition. They are very complex and poetic, but I also think he had more freedom writing for fewer instruments. The music has a sense of spontaneity. I think the slow movement of this Trio is one of the most beautiful pieces of music Schumann ever wrote. I really look forward to playing it.” He added, “Wow, now that we’re talking about it, I’m playing a lot of music.”

END_OF_DOCUMENT_TOKEN_TO_BE_REPLACED

The Orpheus myth inspired French Baroque composers Jean-Philippe Rameau and Philippe Courbois to write expressive solo cantatas about the famous Greek musician-poet and his futile attempts — because of his own impatience — to rescue his beloved Eurydice from the grasp of Pluto in the Underworld. These are beautifully performed by the clear-voiced soprano Hannah De Priest and the velvet-throated baritone Jonathan Woody (who makes a walk-on appearance in the Rameau). END_OF_DOCUMENT_TOKEN_TO_BE_REPLACED

Now that live concerts are beginning to proliferate, it was delightful to hear Oberlin cello professor Darrett Adkins ring a change on the solo suite format with his Hypersuite No. 3 on September 28 in the Cirigliano Studio Theatre at Lorain County Community College. His program opened the new season of Signature Series performances in Elyria, and was dedicated to the memory of Eva Hornyak. END_OF_DOCUMENT_TOKEN_TO_BE_REPLACED