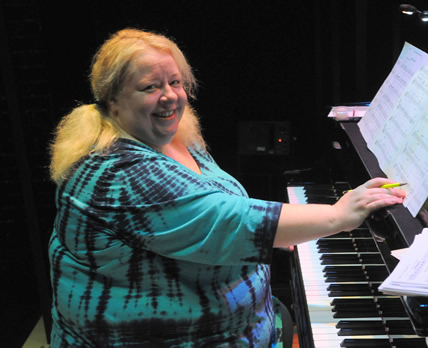 Describing pianist Jackie Warren, critic Carlo Wolff wrote, “To hear her is to fix on her, because Jackie Warren is a lover of the piano. She plays the instrument so well, it makes love back.”

On Sunday August 14 at 5:00 pm at The Madison, Piano Days @CLE will feature Warren in a Dueling Piano Gala as she faces off with GRAMMY Award-nominated pianist and contemporary jazz master Benito Gonzalez. Purchase tickets here.

I caught up with Cleveland’s First Lady of Jazz by telephone and began our conversation by asking her how she met Gonzalez.Jackie Warren: We met at Night Town. Benito was playing a concert in the other room and I was playing the after-show piano bar and he came over and we just started jamming. We were like, we’ve got to do this again, so we lined up a concert together.

Mike Telin: Benito said that you and he were “from the same page.”Did you feel the same about him?

JW: Instantly! It was like we were finishing each-other’s musical sentences. A lot of times that depth of language takes a long time to develop. It takes time to get to know somebody or get used to the group, but for us it was instantaneous.

MT: What did you think of the idea of a “Dueling Piano” concert?

I was into it. I really love and respect Yaron Kohlberrg and everyone I’ve met at Piano Cleveland. It’s a fun idea, but the reality is that jazz musicians — who are on the same page — don’t think of it as a competition. It’s all about playing together and serving the music. It’s an expression of pure love for the art form and your jazz family. True, there have been and always will be contests, but even then, for me it’s about celebrating what each individual can do!

MT: Did you do both a classical and jazz degree at Oberlin?

I studied classical piano and did a Jazz secondary major. The full jazz major didn’t arrive until later. But I took every jazz course I could as well as private readings with Wendell Logan. I studied jazz theory, improvisation, and arranging — everything I could.

My classical teacher, Sedmara Rutstein, was so cool. One day she said “Let’s talk about Art Tatum,” so she took a stride lesson from me.

MT: When were you first bitten by the Jazz bug?

JW: The bolt of lightning was hearing an Oscar Peterson recording when I was about thirteen. I was studying with a teacher in Colorado Springs and she put on the Oscar Peterson trio playing I’ve Got the World on a String. I had never heard a piano played like that in my life. I thought, I have to do that.

I’m sure I was primed for it because of listening to Vince Caraldi’s Charlie Brown. And being from Colorado where there wasn’t a lot going on, we’d play all the TV show theme songs, and some of those did include jazz.

But then to hear a total virtuoso like Oscar Peterson! My teacher recorded it on a cassette and I took it home and learned the solo. My teacher went wild.

MT: What can audiences expect to hear at the show?

JW: We’ve picked some things that we think might resonate with people. We didn’t want anything too bizarre and to have people think, OK, that’s why I don’t like jazz. We want people to donate money.

We also have some different genres like Blues. We both adore the Blues, and that can go in many different cool directions.

And some things where one of us will start something and the other will jump in will be completely improvised.

But we’ll probably just sit down and play, which is one of the great things about jazz. There are a variety of things that will make us feel great and speak to people. Jazz is a fun world to live in. But it is a different world from classical.

JW: You know that feeling you get when you listen to classical music and it just transports you somewhere. You can listen to Beethoven 9 or a Chopin Ballade over and over. With jazz you get that same feeling, but it’s even larger because you’re creating something on the spot.

When I’m playing solo, I’ll be creating with myself, but you truly do not know what is going to happen when you’re creating with someone else. Even if you have an idea about the kind of stuff they like to do, usually some cool musical things will happen that just send you into another mental universe. There’s almost no way to describe it.

MT: You are an amazing classical pianist — how did that training inform your jazz playing?

In a couple of ways. There’s the technical — just developing a strong classical technique and applying it to jazz enables you to play anything you want.

There’s also the musical side. When I first got into classical music I had a wonderful teacher and he got me thinking about the arch of a composition. Of course we didn’t start with a giant 20-minute sonata, my first piece was the Prelude and Fugue in c. Then we went to Chopin etudes. I’m not saying I could play all of them, but we did a waltz, some ballades, and then the etudes. But it was all to teach me to think about the arch of a composition.

He was also into music theory. He had me map out the chords and if you do that you can see how the composer structured a piece. When I started studying jazz, I thought that was cool because some jazz tunes are almost like the development section of a sonata. All of this got me thinking and feeling the harmony.

So many times players think, “I’m going to play every measure as beautifully as possible.” But if you know your theory you can put the emotion where it is supposed to be because you understand the arch. And improvising a jazz solo is all about the arch.

END_OF_DOCUMENT_TOKEN_TO_BE_REPLACED

The strings-only work by Berg has made relatively frequent appearances on the Orchestra’s programs. In 2021, the musicians recorded it for the In Focus series, and it appeared again on last year’s European tour. Friday’s rendition maintained the group’s characteristic light and effortless playing, each section blending as much as possible to echo the work’s original form as a string quartet. At fifteen minutes total, the piece is quite short, but the dense encoded musical meanings require some extra-attentive listening. Splitting up the three movements ensured that each one could be appreciated on its own. END_OF_DOCUMENT_TOKEN_TO_BE_REPLACED