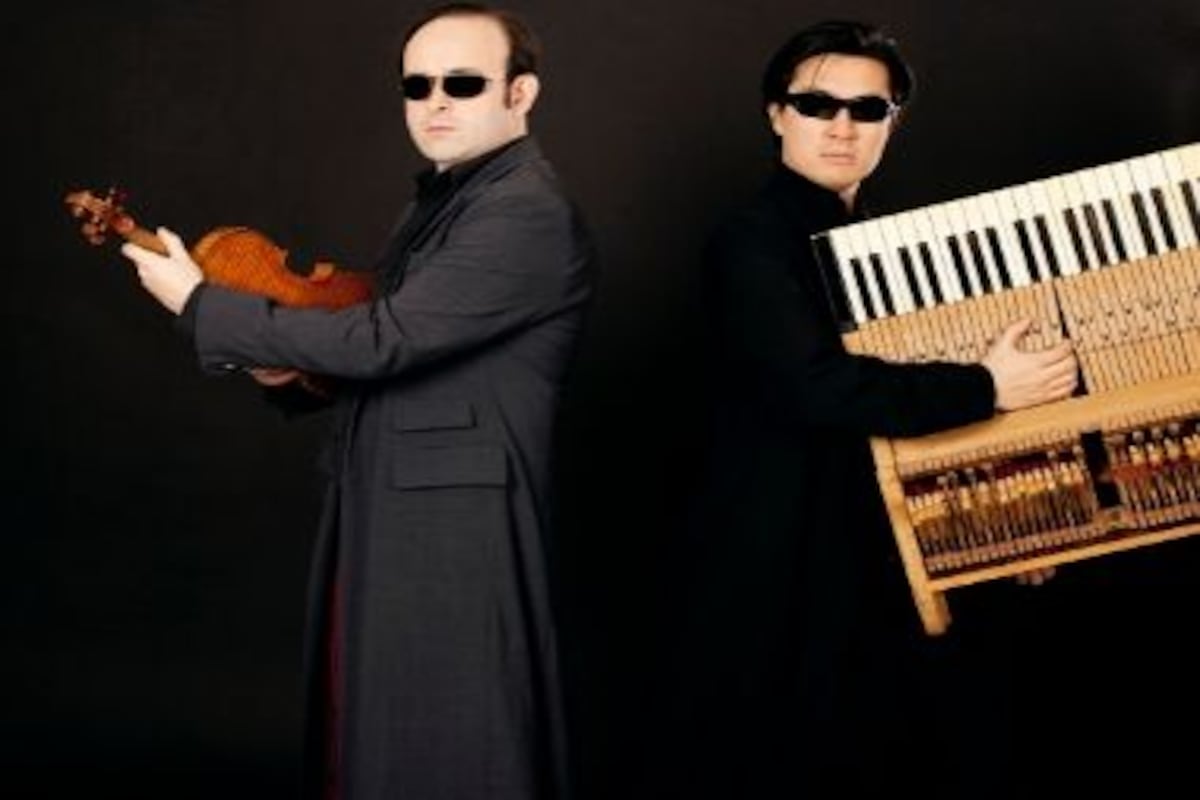 Because it usually takes itself so seriously, classical music is a sitting duck for parody and satire. But the art form also has a divinely installed funny bone that allows its artists to lampoon themselves and their craft, even while producing high quality performances.

This humor can take many forms, from the deadpanning of that great Dane, Victor Borge (while unwrapping and eating a sandwich between solo passages in a concerto), and the plummy but wicked commentary of Anna Russell (particularly on Wagner), to the down-home musicological wackiness of Peter Shickele, often accompanied by his favorite prop, the bassoon.

Violinist Aleksey Igudesman and pianist Richard Hyung-ki Joo, who originally met over a plate of fish and chips at England’s Yehudi Menuhin School, jack up the game significantly with slapstick and athleticism. Performing as Igudesman & Joo, the duo brought their zany act “Play it Again” to the Hanna Theater on July 26, adding an evening of disarming levity to the packed roster of Piano Cleveland’s Piano Days @CLE.

Things got off to a daffy start as the show began with an ending: as the curtain rose, the two were bidding an effusive farewell to the audience and promising an encore — the first of many to be dedicated to a variety of ethnic groups that Igudesman and Joo identified as being important to the local population.

Did I mention that the two were only 12 when they met over those fateful fish and chips? Their frequent descent into sophisticated versions of pre-teen silliness obviously harks back to those days — especially in moments where they create ethnic word salads out of foreign words, or when they indulge in performance rivalries like the one where Joo jealously steals Igudesman’s bow, but the violinist scarcely drops a note, finding smaller and shorter substitutes squirreled away in the Steinway. 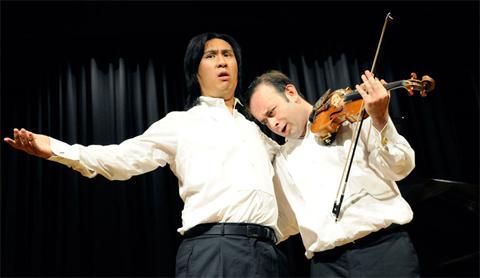 The duo covers a lot of ground during their fast-paced, high energy shows, and no musical form or style is sacred, but their antics defy a blow-by-blow account. As Mark Swed has written about one of their performances in Los Angeles, “Since one clip is worth a thousand words, describing the Igudesman & Joo humor in detail would be to deflate its brilliance. For the put-upon Igudesman, think Jack Benny and Jascha Heifetz rolled into one. For the zany Joo, try an unholy Chico Marx, Vladimir Horowitz and Jerry Lewis mash-up.”

And you never know what their show will morph into next. Following one physically extravagant episode in which Igudesman was banished from the stage, Joo played a lovely, unpretentious piece which had nothing to do with what preceded or followed it — simply an isolated moment of exquisite calm.

The Hanna Theater’s clublike seating plan — with easy access to the bars — provided the perfect venue for Igudesman & Joo’s enthusiastic audience, who lapped up their zaniness and came back for more. Any comedian will tell you that it’s difficult these days to be funny, considering the stiff competition from the nation’s capitol and statehouses. These two bring it off handsomely — and they can play, too.