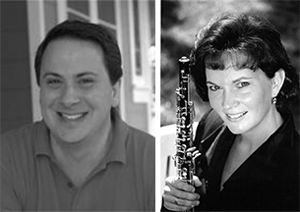 “Why was the oboe so popular during the baroque period? Probably because it was the wind instrument most closely associated with the human voice,” says oboist Thomas Moore. “And I think that composers and listeners were intrigued with the instrument’s unique lyrical tone quality.” “It does have a tone possessed by no other instrument,” adds oboist Danna Sundet.

“I’m not a scholar, but the baroque composers were also the first to put the instrument into the opera orchestra,” Sundet adds. “It went from being an outdoor instrument like the shawm, to an indoor instrument.” Moore points out that J.S. Bach used the oboe many times as an obbligato instrument with the voice, and that Handel often paired it with the upper strings in his operas and oratorios to provide extra brilliance to the orchestral sound.

Sundet calls the Albinoni concerto a “simple, charming piece” and says that she has played it on tours of Brazil and Norway with her husband, trumpeter Erik Sundet. “There are many double concertos by Albinoni and we first learned about them because the famous French trumpet player Maurice André recorded many of them with an oboist friend.” She adds that she looks forward to playing the piece with two oboes.

Like many of his concertos, Vivaldi composed his double concerto for the female music ensemble of the Ospedale della Pietà, “but we won’t be playing from behind a screen and we’ll be visible to everyone,” jokes Moore, who notes that because of the popularity of the Historical Performance movement, were we to be transported back in time, the performances of these works would “sound pretty familiar to our ears.” Moore adds, “one thing we struggle with on modern oboes is stamina, just to be able to play these incredibly long passages with no breaks to breathe.”

Jackson began the program with a recitation of Langston Hughes’ poem “Helen Keller” — the first of five poems by Hughes that served as interludes between each piece on the first half. END_OF_DOCUMENT_TOKEN_TO_BE_REPLACED

Pianos with pins and tape on strings, a bass drum and tam tam, crotales, Almglocken, and vibes. Microphones were hooked up all around the instruments. The feed was sent to speakers around the room. Lighting designer Nicholas Houfek hung incandescent globes over the arrangement of instruments from thin black wires stretching across the beams. END_OF_DOCUMENT_TOKEN_TO_BE_REPLACED

From the podium, Elim Chan set an ambitious tone for the evening. The rising star conductor, here in her Cleveland Orchestra debut, has a commanding style, and every twist and turn in Saturday’s performance tracked closely with her baton. END_OF_DOCUMENT_TOKEN_TO_BE_REPLACED