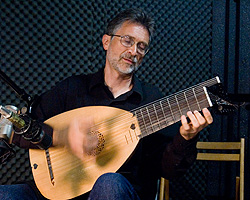 We reached Ronn McFarlane by telephone in Baltimore, and had a wonderful discussion about his instrument of choice, his own compositions for the instrument and the changes he has seen in the early-music scene during his career. We began by asking him to talk a little but about the Intimate Vivaldi program.

Ronn McFarlane: The program is devoted to the music of Vivaldi and his contemporaries. I have recorded a Vivaldi disc of all of his known surviving works. Now the works on these concerts are not all for solo lute but works for lute and strings, so that’s sort of the heart of the program.

Almost everyone has heard the slow movement of the famous D-major concerto because it’s one of the best known melodies in baroque music. It’s played over and over again at weddings, used on wine commercials and at any poignant moment in a movie. It’s a beautiful melody and it is worth overplaying.

There are a couple of trio sonatas for lute, a single violin and continuo. And it is interesting to mention that the continuo in this case, and for those who don’t know what continuo is, it really just means a chordal accompaniment to a piece of music that could be played on any number of instruments. Usually you think of the harpsichord or the chamber organ, but in this case my good friend William Simms will be playing continuo on theorbo and guitar. So you have the lute being accompanied by another plucked string instruments, and the sonorities blend together in a very appealing and natural way that suits the character of the music tremendously well. I think these pieces are not often accompanied by theorbo and it seems like a good match to me. We’ll have a good array of related baroque music from Italy.

Mike Telin: I love the name of the composer Giovanni Zamboni!

RMcF: That’s actually a work for solo lute. I’ve been fascinated by his music for some time; it’s really a lot of fun to play and relish the opportunity to play it. I don’t really know that much about his life and I don’t know that if very much is known. He wrote for the same sort of lute that Vivaldi would have written for and he lived at about the same time and in the same culture.

MT: Well since he’s not well know perhaps I can throw in something about him being the long lost relative of Frank, the inventor of the Zamboni.

RMcF: Yes, [laughing] and we can see if it gets out the ice hockey crowd.

MT: What are the challenges of performing a concert such as this, which is supposed to be very intimate but you’ll have to move from one venue to another which may or may not be so intimate?

RMCF: One of the challenges of playing baroque music on the lute is actually having the lute be heard. Even quieter baroque violins are by nature stronger instruments then the lute in terms of volume. That was the complaint back in the eighteenth century as well. Some composers during that time felt that the lute was simply not a worthy instrument because it couldn’t be heard well along with other instruments. That was probably one of the reasons the lute didn’t continue past the baroque as a popular instrument. Although there were other reasons as well. I think the balance with other instruments increasingly became a concern and really caused the lute to become more of a solo instrument and less social.

When the lute was at its height, which I would say was the late sixteenth, early seventeenth centuries, the instrument was absolutely in the center of musical culture. It would accompany voice, bowed string instruments, recorders, flute, really anything expect perhaps brass and bagpipes. At that time you don’t hear about the lute being too quiet. I think most of those instruments were of a somewhat quieter nature. But later, you have instruments that are capable of filling larger spaces. Perhaps not as large as modern classical instruments are capable of filling, but they were on their way and the lute begins to be left behind a little bit.

So that’s a challenge of playing this kind of music. I will often choose to use a little bit of an electronic boost so that the sound of the lute will be subtly amplified and you’ll have what feels to me like a more natural balance. And, maybe correct some of the criticisms that the eighteenth century musicians had.

MT: How much music did Vivaldi compose for the lute?

RMcF: Vivaldi didn’t really write all that much for the instrument. There are two concertos and two trio sonatas so that’s really not a huge repertory. But he also wrote quite a bit for mandolin, which is interesting. I think the sound of the mandolin tends to poke through the texture of sustained bowed strings. Why did he choose the lute for these pieces? I really can’t say what story exists behind these pieces. All I can say is that if you look at the music, it’s a beautiful match between what the lute can do melodically and what bowed strings can do intertwined with that. I’ve only got to guess that the sounds that would have entered Vivaldi’s ears just sparked his imagination. But I think the total output of Vivaldi’s works for lute and strings isn’t more then about forty to forty-five minutes of music.

MT: What changes in the Early Music and Performance Practice scene have you observed over the years?

RMcF: I think there has been a real surge in baroque music in particular. And in my corner of the early music scene, lute playing, there’s been an explosion of continuo playing for lute, the archlute, theorbo and baroque guitar.

When I first started out there was perhaps a more even distribution of interest between medieval, renaissance, and baroque music, or perhaps it was just the circles I was connected with at the time. But it does seem to me that baroque orchestras and baroque music have really come to the fore and attracted their own audience and that has been a big change.

MT: You’re also expanding the repertoire for the lute by writing new compositions for the instrument. Would a listener know they are contemporary compositions or are you emulating the past?

RMcF: I write in both styles, but I began by writing in more of a renaissance or baroque music mold and it really evolved very organically since that was the music I was playing. But, being a twentieth and twenty-first century person, I was interested in allowing all of the external musical influences into my compositions as well, particularly because I have always thought that the lute is a very flexible instrument. I think it’s articulate and expressive in more styles then just the old styles of medieval, renaissance, and baroque music. As I explored various kinds of impressionistic, folk, or jazz-inflected music, I found that the instrument really had its own voice in each of those styles. So as I put together new music, it really was an exploration of what’s possible on the instrument. And, beyond what’s possible, what’s a good idea on the lute — meaning what naturally seems to work on the instrument? So depending on the composition, one would probably know immediately that it was a modern piece of music because it lets in those modern styles.

MT: When I was reading about your compositions I couldn’t help but wonder: what if Berio wrote for the lute, what would it sound like? It is such a beautiful instrument. Thanks so much for taking the time to talk. Do you have any final words about the program?

RMcF: The main thing I would like to say about the lute — and you’ll hear it in Vivaldi’s context — is that I think the lute is an amazingly flexible and varied instrument. And when you hear this concert you’ll hear a few facets of it. I’ve just found it to be an amazingly rewarding and satisfying instrument to play. And I hope the audience will come out and enjoy the program.

It might seem that there’s not a lot left to discover after three decades of experience with the Red Priest’s charming and evocative score, but this performance boasted a secret weapon: the young Spanish violinist Francisco Fullana, now the Orchestra’s artist-in-residence, whose affecting personality and easy virtuosity raised the solo part a quantum leap above the merely extraordinary. END_OF_DOCUMENT_TOKEN_TO_BE_REPLACED

END_OF_DOCUMENT_TOKEN_TO_BE_REPLACED

The Cleveland Orchestra’s second performance of the new season on Sunday afternoon, October 17 at the newly renamed Mandel Hall at Severance Music Center was just such an occasion. If the ensemble’s return to public concerts under the baton of Franz Welser-Möst wasn’t enough reason to light a bonfire, the Cleveland debut of a new work written for one of the Orchestra’s most popular soloists, and the swan song of one of its longest-serving members added extra fuel to the celebration. END_OF_DOCUMENT_TOKEN_TO_BE_REPLACED