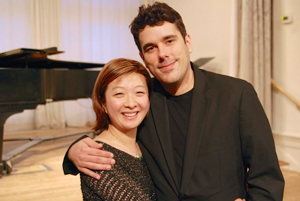 The recently-formed new music ensemble Ars Futura describe themselves as a forward-thinking, mixed-chamber, new music ensemble dedicated to commissioning, performing and popularizing new works. The group’s mission is to insure the continuation of their art form by steadily adding to the repertoire and exposing audiences to the great artists who are composing today. “Our first season is dedicated to the Cleveland connection,” says pianist Shuai Wang who co-founded the group with flutist Madeline Lucas. “I have a great respect for musicians in Cleveland,” Wang adds, “and this season all of the compositions we performed were by Ohio composers.”

Shuai Wang and Madeline Lucas decided to form the group after working together in other area new music ensembles such as Five-One Experimental Orchestra, Blue Streak Ensemble and a Morton Feldman project at MOCA. “We work well together and thought it would be great to form a group dedicated to newly-written works,” says Wang.

Thanks to a successful Indiegogo fundraising campaign, Ars Futura presented two concerts in Baltimore and worked hands-on with the El-Sistema based ORCHKids program of the Baltimore Symphony. “Working with the kids was a great experience,” says Lucas. “We did a masterclass that introduced compositional techniques used by composers.” Following the stop in Baltimore the group presented a concert and masterclass in Philadelphia. “Working with the kids at Play On Philly, another El-Sistema based program, was beyond fantastic,” says Wang. “They were fascinated by the extended techniques and we even composed a piece together.”

Friday’s concert opens with Marshall Griffith’s Children’s Pieces for piano four-hands. Based on children’s tunes, Wang describes the piece as “cute and very clever at the same time.”

Four Characters, a new sonata for flute and piano by Eric Charnofsky, was commissioned as a result of Charnofsky’s being named the 2012 Ohio Music Teachers Association Composer of the Year. “It has been performed a couple of times in the area but it’s a really great piece and I’m very excited to be able to play it,” Lucas adds.

Wang and Lucas agree that Tim Mauthe’s Piano Trio, Devolution, is a fast and furious, energetic piece that utilizes a lot of extended techniques in the string parts. And Three Tangos, for solo piano by Keith Fitch are fun. Wang adds, “It will be great for Keith because he has never heard a live performance of the piece.”

The final work on the program is Joseph Hallman’s Sonata for Flute and Piano which Lucas describes as an extremely challenging piece that is very athletic for both instruments. “It’s a full-length sonata that I believe has the tour de force to find its way into the standard flute repertoire.”

Now that Ars Futura’s inaugural season is almost over, what are Shuai Wang’s and Madeline Lucas’s hopes for the future? They both agree that although this was a first-year trial run, every experience has been fantastic and the group has been well received by audiences. So presenting more concerts locally is a goal and the group has plans to return to Philly.

“Looking further ahead we envision new music residency activities,” says Lucas, who adds “and Ars Futura will be the ensemble in residence at Cleveland Institute of Music for the Young Composers Program, directed buy Keith Fitch, at the end of June. We’ll perform the works by the composers in the program, working with them on how to write for our instruments and with extended techniques.”

Whatever the future does hold, Wang and Lucas agree that working with young people is a priority and exposing younger kids to the world of sound is a must.

Following the concert, audiences are invited to stay and have a drink with the musicians and composers as the group is eager to connect with everyone and to share their vision and plans for next season.

Published on ClevelandClassical.com May 14, 2013