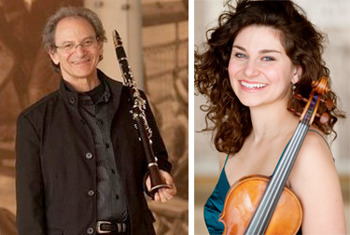 Cohen says the decision to expand to eight ticketed concerts as well as increasing the number of free programs this season was not easy. “There was a lot of debate in terms of how much we should expand, in part because what we liked about last season was the fact that everything was sold out in addition to the incredible amount of community support we received.” Cohen says that last season’s audience surveys, which were full of “honest” feedback,  helped them a lot in making decisions about this season.

One of the new offerings for the 2013 season is the 7:00 pm pre-concert recital by the outstanding young cellist Gabriel Cabezas prior to the Festival’s opening concert  — Continuum: The Divine Cosmos. Cabezas, who was the winner of the 15th annual Sphinx Competition and Sphinx’s 2012 Isaac Stern Award, will perform a 30-minute recital that is free and open to the public. In addition he’ll also be doing some outreach activities during the week as well as performing during other festival concerts.

Another new activity is that the concert on Sunday, June 23, Let’s Dance,  will be free for people under 18 years of age. And following the performance the audience is invited to stay for free ice cream. “We are making an effort to develop a young audience, and this is our first attempt at that.”

In addition to returning to venues such as Mixon Hall, Harkness Chapel and Dunham Tavern, there are some new venues this year. “Because of the popularity of last season’s Movie Night,  this season the event is being moved to the Cedar Lee Theatre, but will again feature the outstanding improvising talents of  Israeli-born pianist and composer Matan Porat. Afterwards, the audience will walk to the Wine Spot for a wine tasting and some jazz and tango performed by violinist Amy Schwartz and her husband drummer Steve Moretti.”

On June 21, ChamberFest will also pay a visit to the Transformer Station. “We’re hoping to create a club atmosphere. There will be a cash bar before the concert along with time for the audience to view the photography.”

The season also includes the music of two guest composers. “After last season, pianist-composer Matan Porat said he really wanted to write a new piece for our family this year. The piece is called Start Time – Stop Time. It’s one piece played in two parts that will act as bookends for the festival. Obviously, Start Time begins the festival and Stop Time will be near the end of the festival.” Cohen explains that the two parts are mirror images of each other, an exact retrograde. She says that they thought it would be fun to highlight Porat as a composer as well as to have a piece written for her, a violinist, her dad, a clarinetist, and her brother, a timpanist.  “And we like his sense of style so I’m sure it will be a great piece.”

Composer Andrew Norman will be on hand for the performance of his Companion Guide to Rome on Wednesday, June 26 in a concert titled Layers: The architecture of time.  “It’s a nine-movement piece for string trio that feels very much like Messiaen’s Quartet for the End of Time. The piece was inspired by Andrew’s trip to Rome when he won the Prix de Rome. He had a goal to visit all of the Cathedrals in Rome and each of the movements is inspired by the architecture of a Cathedral or a patron saint that is affiliated with the Cathedral. The piece also includes some staging. I love it, and I hope the audience will love it as much as I do.  Andrew speaks very well and I do believe he will be bringing some slides of the Cathedrals.”

Another highlight of the second season, (Riot) like it’s 1913 on Jun 29 features a new arrangement of Stravinsky’s Rite of Spring. “We had heard it performed last year in Detroit with percussion and piano so we’ve made our own arrangement for timpani, percussion and piano four hands.” Cohen points out that in Stravinsky’s two piano score, he actually indicates places that should include percussion parts. “Even though he didn’t write any percussion parts, I’m sure he wanted them to be included.”

In addition to ticketed concerts, (IT’S) ABOUT TIME offers plenty of free events including an open rehearsal on Saturday, June 22 at Temple-Tifereth Israel, Coffee and Conversation with guest speaker Patrick Castillo on Tuesday June 25 also at Temple-Tifereth Israel and a live audience performance on Wednesday, June 26 in IdeaStream’s Smith Studio to be broadcast live over WCLV, 104.9 FM.

Published on ClevelandClassical.com June 4, 2013
Click here for a printable version of this article.
Return to the website.